‘You idiot, I’m not giving up yet. Theres a bunch of guys I have to kill first!’

So says Toshiro Mifune as the traveling ronin Sanjuro in Akira Kurosawa’s 1961 jidaigeki film Yojimbo. Mifune stars as Kuwabatake Sanjuro (which means Mulberry Field thirty-year-old, but he tends to take the surname from whatever plant is near him at the time of giving his name). Even though this is a period film with a master less samurai who travels from town to town, looking for food and drink, it feels as if it’s from a time that never was.

Sanjuro finds out the town is overrun by two warring factions, one led by Seibei who is the town brothel owner and the other led by Ushitora, the sake brewer. They’ve been at odds for many years and there seems to be no end in sight from the endless killing and mayhem that continues in the town. Sanjuro is told he should be a paid bodyguard by the town’s constable but instead wanders into the restaurant, run by Gonji, who relays the horrible story of the battle that rages on between both men who are trying to control the town. So what does this ronin think of doing? Try to pit both of the groups against each other to a boiling point by making them both want his service.

He does this the old fashioned way, which is showcasing his skills in front of the town and he kills three of Ushitora’s men without breaking a sweat. There is nobody his equal when it comes to cutting down enemies with his sword, and of course this has both leaders vying for his attention.

Many people have written about Yojimbo and Kurosawa in general. There’s not many filmmakers like him then and now even. He tends to be in a class all his own, considering his filmography reads like a best of Japanese cinema. And when you pair an icon like Kurosawa with the brilliance of Toshiro Mifune, you’ve definitely struck paydirt.

The film has a western feel to it, which many of Kurosawa’s colleagues say he was influenced by, especially John Ford’s sweeping epic westerns of the 1940’s and 1950’s. And even though this samurai has a name, so to speak, many believe this is where the whole ‘Man with No Name’ idea comes from, which then was brought to the forefront with another duo that always struck gold, Sergio Leone and Clint Eastwood.

But let’s take some scenes from Yojimbo and without ruining it for the audience who hasn’t seen this iconic film yet, give you some sort of idea of the influence Kurosawa had on filmmakers from around the world.

There’s a Dali-esque scene right in the first 10 minutes while Sanjuro is walking around the town, trying to shake off the fleas that he’s infested with (watch Toshiro’s performance to understand where this comes from) and he sees how deadly this town is when a friendly looking dog is just trotting along with someone’s hand in his mouth. Sanjuro almost does a double take but keeps walking through because, as you can see by his demeanor, he’s definitely seen worse than that in his life. And even though he’s tough as nails, as everyone who meets him calls him when they see him slice up anybody in his way, we also see the kindness in his heart to a family he runs into on his mission in the town and even to the tavern owner, Gonji, who he jokingly keeps referring to as ‘old man’.

Kurosawa borrows both from Dashiell Hammett’s novels The Glass Key and Red Harvest and his very own Seven Samurai from seven years prior in this story of helpless townsfolk and the reclusive loner who just wants to do right with the people who matter. Kurosawa even brilliantly copies a scene from the film adaptation of The Glass Key (1942) where the main character is captured by the villains and tortured to an inch of his life before he finally escapes in a tense scene of the ‘proverbial cats looking for their mouse which has gotten free’ we’ve all taken for granted in film today.

Seeing Sanjuro from behind in most scenes is also very telling, hiding his face and expressions from the viewer, so the audience is never too sure how hopeless he might be feeling at any given moment, instead giving us wide shots of the hero while he decides on his plan of action. And those wide shots have never looked as crisp and clear with Criterion’s new Blu-Ray transfer. The soundtrack sounds as good as new, which helps put to the forefront one Masaru Sato’s score for the film, which adds to the comedy, the suspense and the action without missing a beat.

‘I know I’m quite a sight, but can you do your staring later.’ Watching this film again and again, you can’t help but always notice the little things in the film, such as the leaf rusting on the ground while Sanjuro is attempting to bring himself back to health. A beautifully shot scene that sometimes you can’t help but overlook in initial viewings. Yojimbo, being one of the most influential Japanese films of its time, we can understand why Hollywood has remade it twice since its 1961 debut. 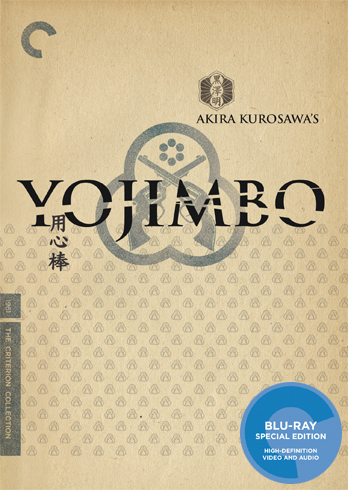 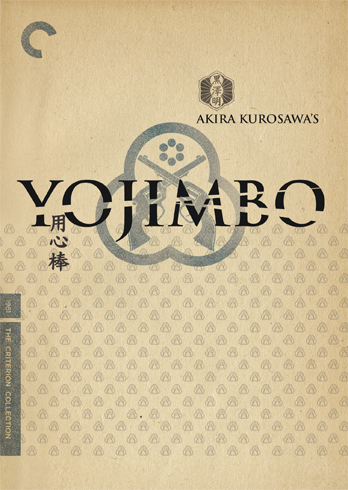