It’s always interesting to see John Wayne before John Wayne. Oh, don’t get me wrong, Stagecoach, which made him a star, had come out three years before Flying Tigers, but in the meantime, the man was still keeping up the pace he’d established in the 1930s, working extraordinarily often in roles of varying sizes. The year after Stagecoach, he played a supporting role as a Swedish sailor in John Ford’s The Long Voyage Home; hell, Flying Tigers was only one of seven films in which Wayne appeared in 1942, many of which saw him second- or third-billed. He was still very much figuring out this whole Movie Star life, never mind what would become his Movie Star persona.

In Flying Tigers, he plays his role pretty straight, adding little of the flourish that would so sharply define him by decade’s end. His flat, Midwestern accent is much more pronounced, little of his defining southern drawl creeping in, and he’s more reading the lines than speaking them. It may be a John Wayne war picture (his first, in fact), but that’s in name only. The film is the most generic version of all that that implies, lacking definition, almost as though none of the parties involved were quite ready to commit entirely to the bravado that could define them, attempting to re-purpose established tropes into a wartime format. 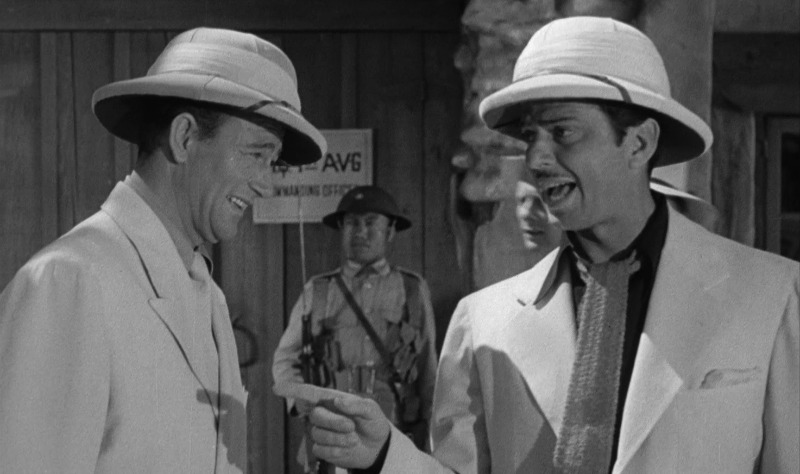 Wayne plays the leader of a flying unit that, in the prewar era, pulled enlisted men, and paid them as independent contractors, to defend China from Japanese air raids. The job pays well, and even better if a pilot’s able to shoot down an enemy plane; this naturally draws quite an eclectic range of characters to the base, chief among them “Woody” Jason (John Carroll), an ace pilot who knows exactly how good he is and isn’t shy about putting his own ambitions before the good of the group, or even his own well-being. If this sounds familiar, it’s because this character was a staple of the aviator genre that was abundant in the 1930s, from Ceiling Zero to Only Angels Have Wings to dozens upon dozens of mostly-forgotten films about every corner of the aviation business. Carroll is extremely eager to make his mark as a sort of Clark Gable knock-off, but his enthusiasm registers more like desperation than confidence, which certainly paints his character in an interesting light, but not nearly as compelling a one.

The real outfit didn’t see combat until after Pearl Harbor, but Republic Pictures understandably felt they could use a little more action, and what action it is. Using a mixture of newsreel footage, rear-screen projection, and models, the result remains incredibly convincing; I nearly stated here that they used real airplanes for the combat scenes, though subsequent research proved that untrue. But they certainly fooled me. Those scenes, along with a few bits that explore Wayne’s relationship to the men he commands (as well as the nurse he romances), jolt the film to life from time to time, but Flying Tigers mostly forgets Wayne at the expense of Carroll, whose own attempts at romancing the nurse fail as much dramatically as they do for him, sexually. He does lend the film some rather pleasing touches; missing a handshake with the widow of a fellow pilot; later, his insightful line that most people never really grow up, which sort of flies in the face of how romanticized the men of that generation have become over time. 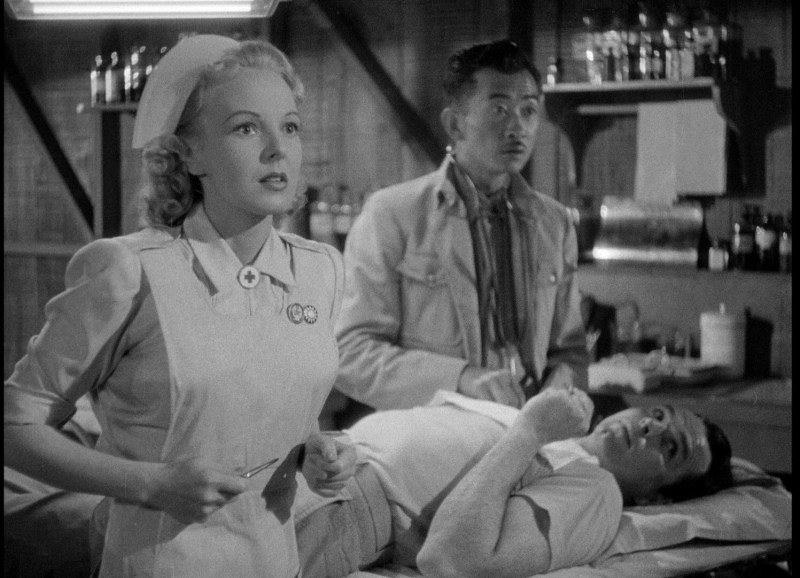 The film’s eventual turn towards active propaganda (not that it was painting the Japanese army or people in a flattering light otherwise) does feel like a natural extension of the themes it’d established (self-sacrifice for the greater good and all). It also has quite the rousing finale, which…I’m not saying George Lucas completely ripped it off for Star Wars, I’m just saying the attack on a Japanese bridge bears a striking resemblance, especially in how it’s discussed, to the attack on the Death Star.

This decent film is handled decently by the folks at Olive Films for their new Blu-ray release. Whatever source print they had exhibits a good deal of damage, flicker, and some stability issues, but it never gets too unwieldy or distracting. Those accustomed to seeing older films on 35mm will find little truly objectionable; those who only know studio-produced Blu-rays may be more incensed. Me, I prefer this to a studio-scrubbed master almost any day. Give me some of that sweet authenticity. Contrast is excellent, grain is varying and pleasing, and the image is crisp and clear throughout.

As is Olive’s way, there isn’t a single supplemental feature. You’re either in for the movie, or you’re out. For John Wayne fans, this is a fascinating look at his talents while he was still very much on the rise, and if you like the 1930s aviation genre and war pictures, this pretty pleasingly blends the tropes of each, showing in a very concrete way how a people became an army.