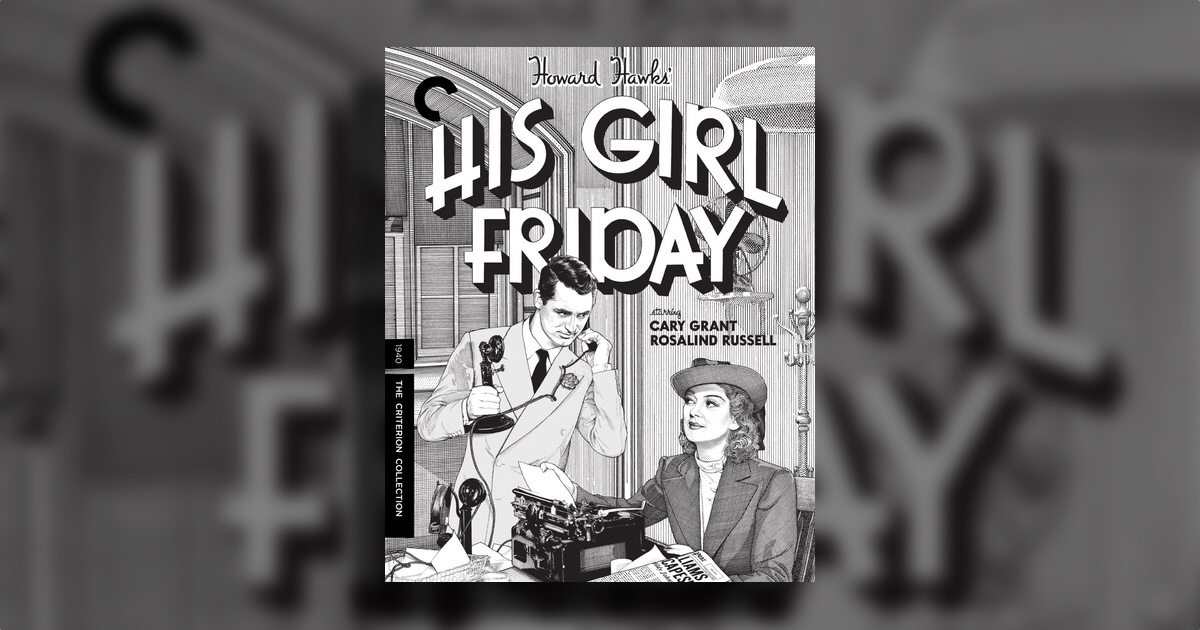 News Flash! (Dateline: Chicago IL. January 10, 2017.) The Criterion Collection launches its 2017 campaign today with a raucous one-two punch that summons fond memories of Hollywood’s Golden Age while jabbing its finger into the chest of today’s corrupt media hacks. His Girl Friday, that epitome of classic screwball comedy, gets the deluxe treatment in a handsome dual-disc Blu-ray edition that also serves as a fancy showcase for its influential predecessor The Front Page. This winning effort by the whipsmart Criterion team spares no expense, as both flicks leap off the screen with a frenetic urgency that almost seems improper for relics of such venerable age.

But it’s not the longevity that sells this package, it’s the the relevance of how concisely the parallel stories, each with their own sharp accents of distinction, speak to today – how the brilliant cynicism of Ben Hecht’s snappy dialog simultaneously captures the spirit and feistiness of a bygone era while exposing common themes of how scandals are willfully concocted by powerful, unscrupulous men in the pursuit of their own petty lusts. Whether its rolling back the facade of respectability from the news media to reveal their overlords’ drive for power, money, fame, sex or just a rollickin’ good time hanging out with the fellas, His Girl Friday and The Front Page both deliver the goods. This double scoop deserves to be picked up pronto, while it’s still hot off the presses.

And for those of you who bother to read beyond the second paragraph, I’ll expound a bit further. I hardly need heap any more praise on His Girl Friday. It’s truly among the most revered and beloved icons of a truly marvelous era, featuring brilliant performances by Cary Grant and Rosalind Russell as a cagey dyad working in the newspaper biz, finding their way back to each other in the aftermath of a divorce that left them both more disappointed than they realized. Grant’s caddish maneuvers as a relentlessly competitive publisher set on landing the big story and persuading his ex to get back on her news beat are rendered with masterful command of his face, voice and body. Russell is every bit his worthy counterpart, holding her own under the relentless pressure of fending for herself in a hard bitten boys club that’s come to respect her for her skills and her feisty demeanor. The lines are delivered with flawless, frantic precision, becoming a musical suite as the wisecracks become familiar enough for us to focus on the magical rhythms of their utterance. It’s a zany swift-moving romp, touted by many who’ve seen His Girl Friday much more often than I have to be just as amusing (or even more so) after many years of familiarity have set in. I have no reason to doubt them.

As a treasure of popular cultural history, this edition is about as definitive as one could hope for. The movie’s unintended entry into the public domain a few decades ago had the beneficial effect of increasing its exposure on TV and in college film courses, where the rat-a-tat pacing and Hawks’s famously clean, unobtrusive framing and scene construction could be freely analyzed and appreciated by many a budding critic, actor, director or crew member. That also means that there is no shortage of cheap mass produced versions to sort through. However, those previous offerings can all be consigned to the landfill now. This is the set that will never be surpassed. The hi-def transfer and clean audio soundtrack freshens up the presentation considerably, and a nice array of supplements, including archival interviews with Hawks, an insightful video essay by David Bordwell, excellent “making of” featurettes and a lively radio adaptation starring Claudette Colbert and Fred MacMurray, offers plenty of context for proving the greatness of His Girl Friday. OK, ’nuff said about that.

To my mind, the absolutely crucial and essential bonus to this package is the newly restored and, quite frankly amazing, supporting feature The Front Page. It’s rare for Criterion to mention a second full-length film on an external packaging sticker (the only other one that comes to mind is when they touted the inclusion of Wim Wenders’ Tokyo-ga on the old DVD editions of Ozu’s Late Spring.) But The Front Page is more than deserving of that honor – in fact, the only reason I wouldn’t want it to share a full front of the case credit is to prevent spoiling the lovely cover illustration of a scheming Grant and Russell by artist Randy Glass. I was absolutely delighted by the earlier film, shot in 1931, a mere eight years before the release of His Girl Friday, but of course on the other side of that Hays Code dividing line. It’s impossible for me to assert that the original surpasses the remake altogether – none of the cast approaches the epic scale charisma of Grant and Russell, and Hawks’s pacing is turbo-charged whereas Lewis Milestone’s work on The Front Page is merely peppy (though it does pack a wallop all the same.) But there are some aspects that I enjoyed more here than I did in the headliner event.

The supporting cast in The Front Page contains more memorable individuals than their counterparts in the later film. Characters are delineated with a sharper edge and given more time to play out their particular quirks. It’s the difference between a very successful ensemble effort inhabiting a grimier milieu and the more highly evolved slick star vehicles that Hollywood specialized in by the end of the 1930s. It practically goes without saying that His Girl Friday‘s script was dutifully scrubbed up and sanitized of the more obvious double entendres that carried over from The Front Page‘s origins as a runaway Roaring 20’s smash hit on Broadway and survived in the post-Wall Street Crash film adaptation. That also lends a more biting political edge and class consciousness to The Front Page, which takes the time to expound a bit on the anarchist principles of condemned prisoner Earl Williams. As the Depression was lifting a bit by the time His Girl Friday was made, and the inevitability of a second World War became clearer, the framework shifted to discussions of “the Red Menace” and a more generic setting aside of Williams’s heartfelt grievances and humanitarian impulse.

There are, in both films, a few cringe-inducing moments of casual unconscious racism and sexism, which while somewhat par for the course in films of this time, still deserve to be called out as potentially disruptive to our enjoyment. Each viewer will have to work through that concern on their own terms, but once its done, the second disc in this package offers a host of delights beyond the film. Having made that acknowledgment though, this resurrection of a legendary title (one that Billy Wilder remade late in his career) elevates the total package to a sublime level that the release wouldn’t have attained if it had just consisted of the single Hawks/Grant/Russell blockbuster, as great as that is. Discovering the marvelous work that went into preserving The Front Page after the fortuitous discovery of an all-but-forgotten original cut of the film, is the kind of unique pleasure that Criterion specializes in delivering. I was as engrossed in the technical details comparing the three different versions of the film (one for US distribution, one for other English speaking markets, and one for the rest of the world) in the restoration documentary as I was in watching both of the highly entertaining features themselves. In addition to all that, we get two more radio adaptations of the original stage play from 1937 and 1946, and a boffo dual fold-out newspaper insert that perfectly captures the look and feel of old time media.  The essays are excellent, the packaging is perfect, and the cumulative impact of this twin bill is impressive. Even as the echoes of various “Best of 2016” chats are still fresh in my memory, Criterion has given us a legitimate contender for year-end honors when we resume that conversation twelve months from now. His Girl Friday oughta sell like hotcakes.