When one takes inspiration from a story that dates back to the 1500’s, it’s truly hard to find ways to turn that narrative into something new and fresh. Take the story of Faust, for example. With roots deep in the world of German legend and folklore, the story of the man named Faust has been adapted as many times as one could dream of, even into the world of cinema. From the days of early silent film, filmmakers were looking not only at this story directly, but the idea of the “Faustian bargain,” for inspiration for these early feature films. And even today, this legend has iconic auteurs looking to its narrative for new pieces of cinema.

That’s where director Alexander Sokurov comes in. Now available on Blu-ray from Kino Lorber, after a lengthy festival run and even lengthier run on the arthouse theatrical scene, Sokurov’s adaptation of the story, simply called Faust, is yet another singular piece of work not only inspired by this iconic German legend, but from one of the most important names in modern world cinema.

Sokurov’s spin on this legend is entirely his own, however. Clocking in at 140 minutes, Sokurov’s film is an anarchic, manic free-wheeling adaptation of the Faust legend that introduces us to a man from which the film draws its name, a down on his luck gentleman with an affinity for one beautiful young woman. With his eyes set directly on the gorgeous Margarete, as well as all the money and knowledge he can get his paws on, Faust meets a man named Geldverleiher, a moneylender, a man who may or may not be the devil in flesh and blood. This grotesque looking monstrosity offers him the deal of a lifetime, Faust’s soul for the beauty that he so desperately pines for. So, like any man in love (or lust, however you define it), he accepts the deal and what follows is one of the most breathtaking and bewilderingly off-the-hinges adaptation of this legendary piece of folklore film has ever seen.

Sokurov, as any cinephile will rightly tell a person who is new to the filmmaker, is a beast entirely his own. Best known for films like Russian Ark, his latest film is a deeply moving piece of craftsmanship, that proves just how deft his hand is behind the camera. Using an ever moving camera that has no issue flaunting the grotesque and often beautifully detailed landscapes and sets, which use streets from the Czech Republic to the highest degree possible. Sokurov’s painterly, sweeping camera is in full effect here that while it may not be as lyrical as his one shot masterpiece Russian Ark, the film feels ripped right out of that picture. As close to poetry as cinema could ever hope to get, Sokurov is at the top of his game here, getting into the trenches, never shying from the various macabre moments that envelope this anarchic motion picture. Adorned by top level production design and sound design that will have any audiophile leaping for joy throughout this rather hefty picture, Faust is a masterpiece of craftsmanship and cinematic artistry.

Luckily, the performances are equally as good. Johannes Zeiler stars here as the titular lead character, and is an absolute revelation. His character goes on a journey straight to hell with the devil himself, and while the narrative and aesthetic are quite brazen in their surrealism, his performance is both unhinged and yet beautifully rich and layered. He longs for Margarete, played by Isolda Dychauk, an actress I’m not all that familiar with but one who truly steals the show. She has a look that would make any man with blood flowing through his veins and a heart beating in his chest think of signing their soul over to Satan himself to have her in their arms, and she gives a truly lovely performance. Anton Adasinsky rounds out the main cast in the role of the Moneylender, and he gives the film a shot of energy that the performances truly need to match the lively camera work from Sokurov. It’s an off balanced performance that gives the film a brooding sense of uneasiness it so desperately needs.

Overall, Sokurov is far less interested in the intellectual merits of the ethics behind the central bargain. Inherently an Id-fueled journey into one man’s mind, Sokurov’s film is as lively and visceral aesthetically as the performances are unhinged. A beautifully meditative and poetic look into a time-tested morality play at its most raw and vital. One of the best films of this still-young decade, Faust is a film that needs to be seen to be believed. Especially thanks to this brand new Blu-ray. Kino’s home video release is lush and has a haze to the photography that really draws the viewer in, and the sound work is ever so crisp and engrossing. Despite a lack of features, this is a must-own Blu-ray for any interested in the artistry of one Alexander Sokurov. 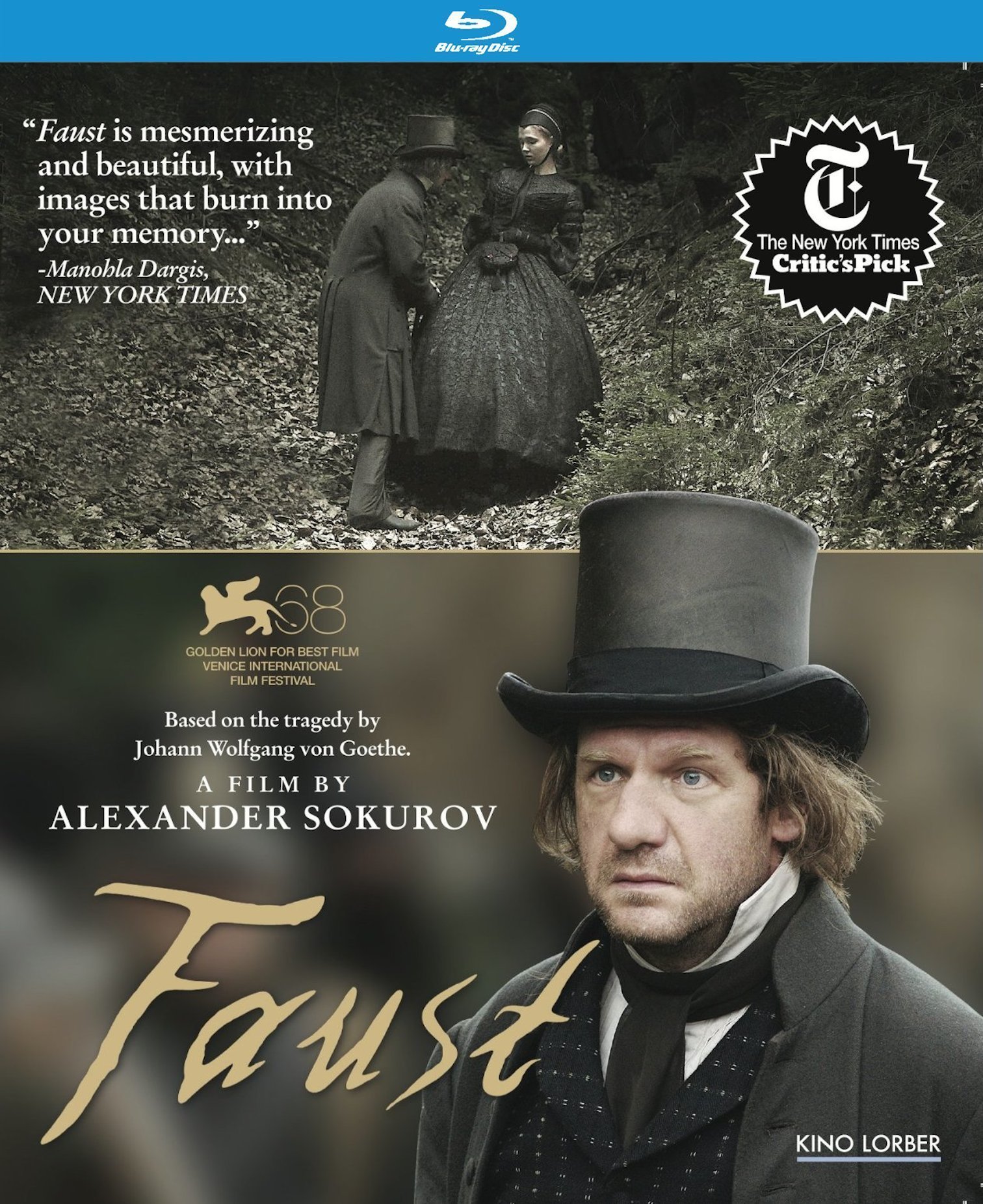