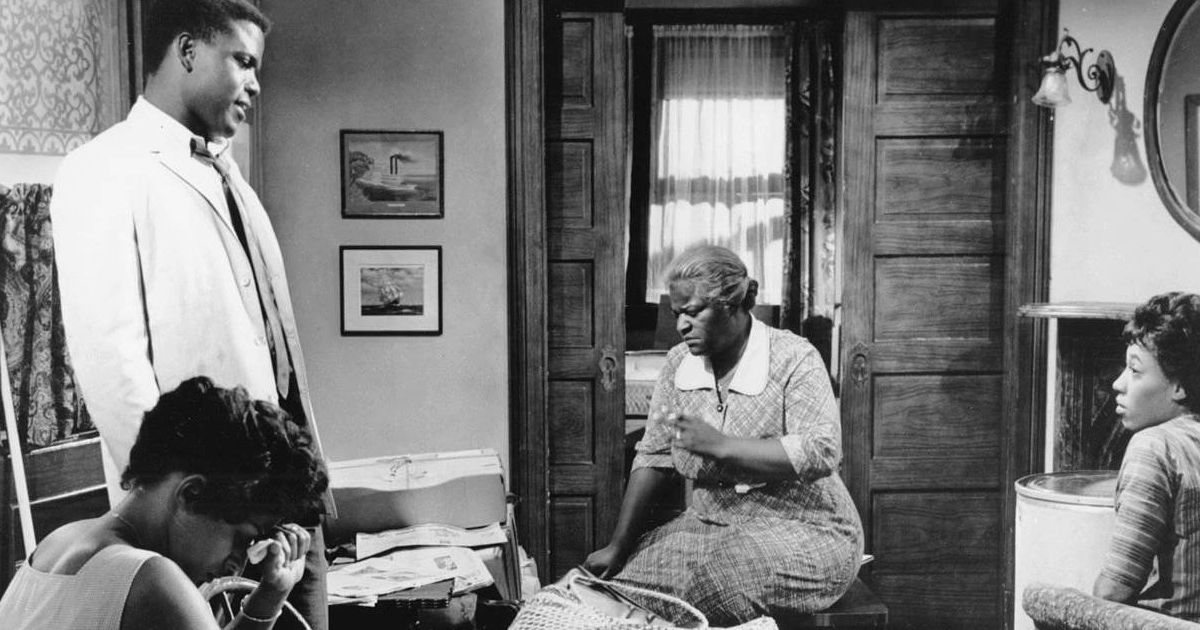 The line between stage and screen has been blurred, almost since the very beginning of the film medium. Theater adaptations flood the annals of film history, ranging from the insufferably flat to the truly transcendent. They’re also, sometimes, fodder for some of film’s most important “firsts.”

For example, A Raisin In The Sun. Newly entered into the ranks of The Criterion Collection, Raisin came onto theater screens already with history behind its name, as writer Lorraine Hansberry saw her now iconic play become the first written by a black woman to hit the Broadway stage. And, while cinema throughout its history had dealt with the black experience in various ways, the play’s leap to the big screen marked an equally important evolutionary moment in the portrayal of minority groups, particularly due to its almost entirely African American cast.

Starring Sidney Poitier and Ruby Dee, the film tells the story of one African American family, and their experience of living in a tight apartment in Chicago. The Youngers are a driven group, working day to day in the hopes of one day being able to truly make it in this world, and with an insurance payout on the horizon, things are appearing to look up for the collective. However, when dreamer Walter Lee Younger begins to quarrel with his partner Ruth and his mother Lena over how to truly use the said money, the film begins to develop into both a potent familial drama as well as an unflinching look at what the American Dream truly is, particularly for people of color.

At its core, the film is a generational drama, finding the main dramatic weight within the back and forth between the bright-eyed youth of Walter and the more pensive nature of Lena. However, where the film is at its most timeless is in its discussion of housing inequality. Still to this day one of the great shames of this nation, housing inequality and discrimination is one area of modern America where racism still, well over half a century post-Raisin, rears its ugly head. Through John Fielder’s Mark Lindner, we see a viciously racist man who is so sure in his discrimination and so assured that its the right side of history to be on, that his soft-spoken request for the Younger family to back out of buying a house in an all-white neighborhood feels almost more disgusting than if it were amped up into the campier arenas that this type of racism is seen. More of the film is devoted to the interplay between genders and generations, but it is this racial differentiation that turns what’s otherwise a relatively flat and overly theatrical film into something truly special.

And therein lies the film’s main issue, some 57 years on. Directed by Daniel Petrie from a Hansberry screenplay, the film is rooted heavily in the type of theatrical filmmaking that is found throughout the history of this type of adaptation. Driven by some truly impressive set and production design work, the directorial voice here is flat and lacking the type of energy that comes across so clearly in the performances, particularly Poitier’s. There’s an interview that kept coming to mind while watching this, one between Laurence Fishburne and Elvis Mitchell, the former talking about great actors, using almost jazz/swing music type parlance. Attempting to get at some sense of the actor’s freedom in front of the camera and within their own skin, there’s a looseness seen in this Poitier performance that feels of the same DNA. It’s clear he’s experienced with the play, as he seems to not only get the language down perfectly, but understand the deep nuances of each word, from intonation to the character’s physicality in each scene. The same can be seen for Ruby Dee, who is an absolute delight to see in this film. Her chemistry with Poitier is real and feels lived in, and between her and Claudia McNeil as Lena, the film’s greatest assets are the two women that lead its cast. Both are absolutely superb here, and match Poitier blow-for-blow, word-for-word. It’s just too bad it’s in the support of a film so flat. The camera is relatively lifeless, even for this time period, and its stage roots are front and center in how clearly designed each set looks and feels. It’s the one aspect of this otherwise superlative film that doesn’t seem to have aged quite as well.

Newly admitted into the Criterion Collection, A Raisin In The Sun is a fascinating study in what one hopes to get out of a release from this brand. Spearheaded by a really impressive new 4K restoration that breathes new life into the gorgeous black and white photography, the supplemental material is, well, interesting. There are two new interviews included here, with writer Imani Perry and scholar Mia Mask, that take a look at both Hansberry and Poitier respectively, which are the most exciting disc-based additions here. Particularly the Mask video is a relatively lengthy look not only at the film and its cultural impact, but the role this had in the overall career of Poitier, and for those unfamiliar with the play’s creactor, Perry’s video piece is a perfect primer.

A segment from the documentary Black Theatre: The Making of A Movement is included here, to give some much-needed context to the play and its role in the history of African American art, and a 1961 interview with Hansberry allows the artist herself to take center stage. Finally, an episode of Theater Talk is included here, looking at the play from the vantage point of a 2002 retrospective and an interview with director Daniel Petrie is arguably the Blu-ray’s only really forgettable supplement. All of these archival materials are interesting, but seem to track much of the same ground, which isn’t the case for the two essays included here. Scholar Sarita Cannon looks at the importance of the picture historically with prose that’s absolutely captivating, and the legendary James Baldwin is featured here, in the form of a 1969 tribute to Hansberry that, much like all of Baldwin’s work, is an absolute honor and privilege to dig into.

Released into the wild on the same day as Criterion’s shiny new Andrei Rublev Blu-ray outing, A Raisin In The Sun is bound to be left somewhat in the proverbial dust. And that’s a true shame. While the filmmaking here is frustratingly flat, Hansberry’s adaptation of her iconic stage play is a pertinent look at what she described as “dreams deferred.” As much a moving portrait of generational dynamics as it is a disturbingly timely rumination on housing inequality, A Raisin In The Sun is a timeless motion picture, more than worthy of this solid home video release.