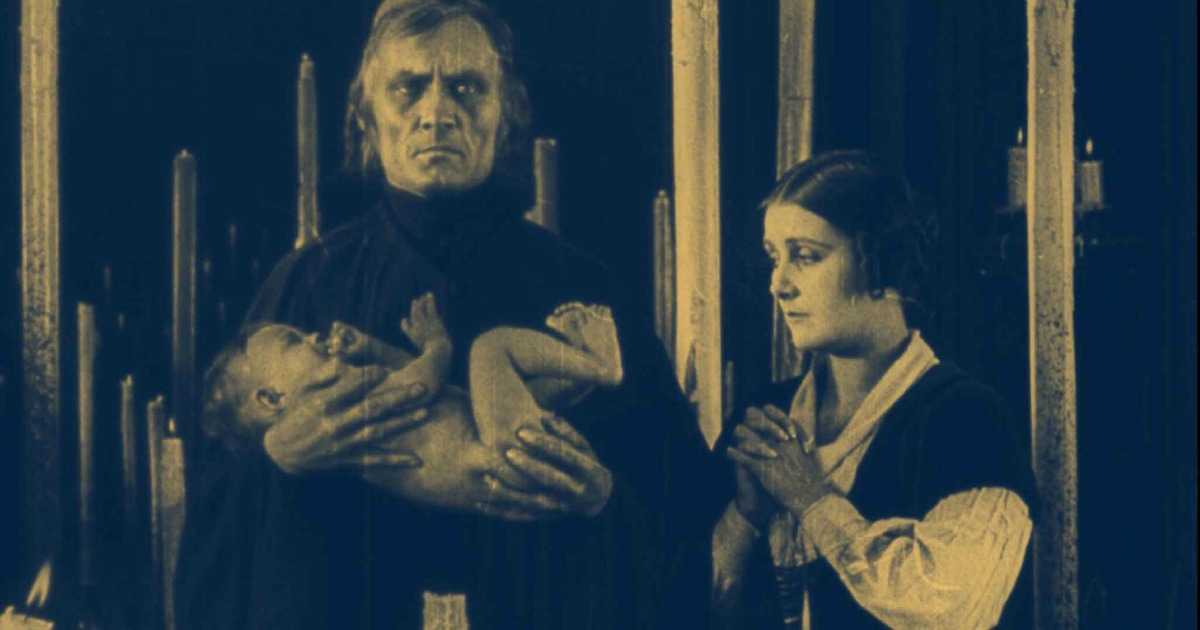 Few filmmakers have had a decade-long run quite like director Fritz Lang did from 1921-1931. Featuring films like Metropolis, Spies and lest we forget arguably his greatest film, 1931’s M, Lang’s run throughout the ‘20s and into the ‘30s is a collection of films that any director would kill to have listed on his iMDB credits page.

And one of the films that started this series is maybe the director’s most underrated masterpiece, 1921’s silent epic Destiny. One of the “weirder” entries in the filmography of Fritz Lang, this neo-surrealist horror/drama tells the story of a woman as she encounters the physical manifestation of death, a black cloaked-man (Bernhard Goetzke), after he steals away her main squeeze (Walter Janssen). Attempting to get him back at all costs, Death offers the woman three chances to save her lover, tasking the woman (played by Lil Dagover) with saving the lives of at least one of three doomed men throughout history. She’s sent to Persia, Venice during the Renaissance and finally China, all with the one goal of saving a man’s life in order to save another’s in her time. Penned by none other than Lang’s wife and oft-collaborator Thea von Harbou, Destiny is one of Lang’s most lushly crafted silent films, finding the director getting not only comfortable commanding a tone and a mood behind the camera, but willing to experiment with new tricks in hopes of elevating an already tense motion picture.

Subtitled “A German Folk Song in Six Verses,” Destiny is putting both its influences and aspirations directly up front. Deeply rooted within the tradition of German folklore, the film’s pacing is lyrical and the trio of tales play out like a collection of poetic vignettes that would make up a classical German lament. Death is a theme that casts a wide shadow over German art, particularly folksongs like the one that Lang’s film aspires to be. Von Harbou’s script also owes a debt to the fairy tale tradition, with the Brothers Grimm coming to mind throughout the film’s 98 minute run time.

A treasure trove of deep-seeded references both historic and literary, this new Blu-ray includes a Tim Lucas-led commentary track that is an absolute must-listen for anyone with a passing interest in the relationship between von Harbou and Lang, and also the pair and their relationship to German. It’s also a Rosetta Stone of sorts, helping to parse out the connection the film has to German folk songs from throughout the country’s history. It’s an important supplement, and one that is an absolute selling point for this new release.

Another selling point? This restoration is an absolute masterwork. Led by Nake Wilkening and the Friedrich-Wilhelm-Murnau-Stiftung, this new 2K restoration really breathes new life into this striking bit of expressionist filmmaking. Be it a simple shot of our lead actress as she ascends a staircase flanked by large pools of pitch black nothingness or a bravura sequence involving candles meant to represent human lives (with Death birthing a new born child out of a candle’s flame, only to watch as the candle goes out thus making the child disappear), Lang began really experimenting with his cinematic language here, and it makes for an utterly compelling watch. The sequences in the different time periods are all lavishly designed and decorated, with the sequence in China being a real highlight of the picture. While we’ve seen Lang experiment with production design before (in films like The Spiders), this feels far more tactile, and when combined with Lang’s use of multiple exposures, creates a film that is as beautifully crafted as it is genuinely brooding and unsettling.

It also helps that the performances are utterly magnetic. Lang-staple Bernhard Goetzke is a delight here as the stone-faced Death character, with this performance highlighting Goetzke’s superb screen presence. Janssen is fine as the dead lover, with the final sequence being one of Lang’s most emotionally wrought peices from his silent period. However, it’s Lil Dagover’s show, and she’s a revelation. A face film fans are familiar with (best known for films like The Cabinet of Dr. Caligari), Dagover’s character is a textured one, a woman who is both afraid of Death and yet unwilling to let it take the life of the man she loves. It’s a high-concept story, but is given real heart and humanity thanks to the alluring presence that is Lil Dagover.

Recently playing theaters across this country, Destiny is ripe for discovery for those cinephiles interested in the artistry of the silent period. Easily Fritz Lang’s first real masterpiece, this is a picture of profound emotional depths, a drama that is as emotionally rich as it is gorgeously crafted. With Lang truly coming into his own with this silent epic, this is one of silent cinema’s great unsung gems. Hopefully this new Blu-ray will bring it to light in larger cinephile circles.