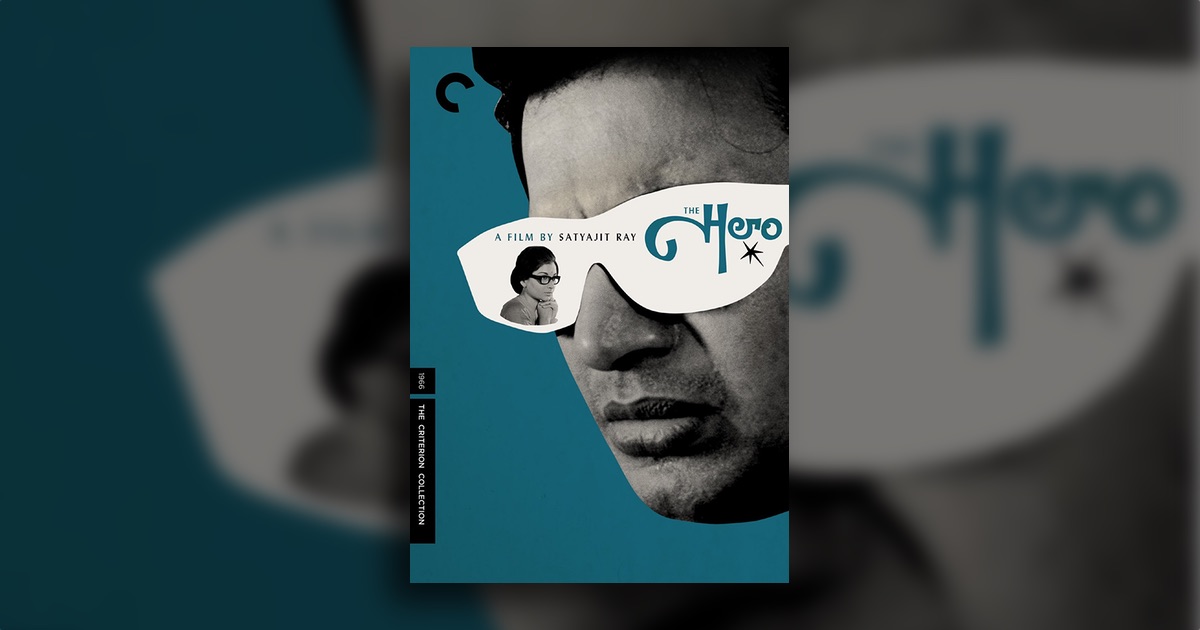 Few films have become as lionized or canonized as director Federico Fellini’s masterful 8 ½. Now firmly cemented as one of the truly great films ever made and a magnum opus not only of director Fellini but of an entire style of cinematic craftsmanship, 8 ½ is synonymous with the art of filmmaking and the fictional manifestation of filmmaking craftsmanship. However, there’s a film now available on Criterion Collection DVD and Blu-ray that takes a different approach to the world of art and fame, and may very well be the film worthy of canonization.

From 1966 comes Satyajit Ray’s The Hero, a film that may be less surreal or impressionistic (although some sequences here challenge that claim) than Fellini’s classic, but gets to the heart of fame and the artist just as well or as potently as any film made before or since. The picture stars Uttam Kumar as Arindam Mukherjee, ostensibly India’s biggest box office star. Think of him as a George Clooney figure a sought after idol that’s both a sex symbol and a mammoth cultural figure. Kumar himself fits this mold, making a claim for himself as one of Bengali cinema’s greatest film stars, a figure of historic importance rivaling that of any Hollywood legend. Anyways, Mukherjee is setting off from Calcutta to Delhi to pick up a prize that he’s slowly becoming of unsure of his worthiness for. Arguably the film’s central musings sums up to the question of “are film actors puppets,” and it is in this uncertainty of one’s own worth and the worth of their craft, that haunts the proceedings. However, as a superstar, Mukherjee is never able to muse on this for far too long, as his presence is a constant over the co-inhabitants of his train, and also those outside it who he comes in contact with, no matter how hard he tries to distance himself from them.

One such person is Aditi Sungupta (Sharmila Tagore), an editor for Modern Women magazine. Not prone to covering film, as Mukherjee is eager to point out, Sungupta nonetheless asks the star for an interview, and as the journey progresses we watch as their relationship, and Mukherjee’s relationship to the role he plays both literally and in the broader cultural abstract evolves. It’s the central relationship of the film, and it is one of deep beauty and profound moments of character evolution.

And that’s primarily due to the fact that director Satyajit Ray is at the very height of his powers here. One of his first writing/directing credits, The Hero sees Ray at once flexes muscles both well used and rarely discussed. A master of the close-up, Ray’s camera is never claustrophobic, yet finds deep humanity and profound emotion within the faces of his actors. Be it the nameless faces we come across while on this journey with Mukherjee or the face of Aditi as she shakes our lead out of complacency by simply removing her glasses, Ray’s use of the actors physical presences is absolutely breathtaking. It’s a film riffing on themes and ideas that may leave some viewers emotionally detached (the idea of a filmmaker casting an actor to play an actor in a film about acting can rightly sound, dare I say, self important), and yet be it the burst of energy found in a nightmarish dream sequence or in the moments our lead shares with an elderly man on the train, the film never loses sight of its heart and emotional core.

That also isn’t to say the film is in any way a static piece of filmmaking. Ray expands his vocabulary into the world of surrealism, or maybe more rightly poetic realism, through the form of some aforementioned dream sequences. These sequences break the mold in almost every way, despite playing in almost cartoonishly cliched structures. We watch as our lead goes mad running from skeletons reaching out from piles of cash, or watch as his mind races about a studio known as Fortune Films. These aren’t subtle digressions, not in the slightest. However, this isn’t a film of subtle gestures. Well, it is in the literal form. The subtlety is found within the performances. The chemistry between both of our main characters is palpable, with Tagore stealing many of the scenes she’s in. Kumar is a revelation here, proving why he’s become an almost religious-like figure in Indian cinema, and giving one of Ray’s more charismatic lead performances. Oh, and the Fellini comparisons come back here. Kumar feels directly ripped out of the mind of Fellini, down to his perfectly tailored suit and effortless swagger.

But where Fellini’s men feel rarely human, or at least rarely suffering from human worries, Kumar’s Arindam faces these issues head on. The idea of his role not only in the world of film but in the world writ large is never far from Arindam’s mind, waxing poetic about this being the age of Freud and Marx, with the push and pull of cultural conscience weighing heavy on the shoulders of our lead. If you believe that this is an age of “no rebirth,” how will you make your legacy one worthy of sticking around in this world? That is the central conflict within this picture, and that is why this has become one of Ray’s most important films, and one of the great films about the artist and art itself.

Criterion’s new release, however, is a bit more of a mixed bag. The new 2k transfer is an absolute doozy, with the black and white photography really popping off the screen. There is a new subtitle translation, which is always nice, but outside of an interview with actress Sharmila Tagore and a discussion with scholar Meheli Sen (both of which are captivating, don’t get me wrong), it’s a bit of a thin release. Sure, one can’t argue with the company giving the single release to a film as hard-to-see as this is, but a commentary would have been nice, or even a visual essay giving more depth to the role of this in Ray’s career or that of Kumar’s for that matter. However, what elevates this release is the artwork and the booklet. The booklet is really great, as author Pico Iyer’s essay is a real key with regards to “getting” what this film is attempting to do, and Ray’s tribute to Kumar upon his passing is touching and gripping. Now, for that cover, it may be polarizing, but it’s really special. It’s special in the same way New Directions Press paperbacks are special. Simplistic design paired with eye catching colors and type faces, this is a cover that may seem deceptively simple, but it’s one that everyone will pick up when they see it on the shelf. And for a film like The Hero, that’s really all one could ever hope for. Now here’s to hoping some who pick it up decide to pop it in.