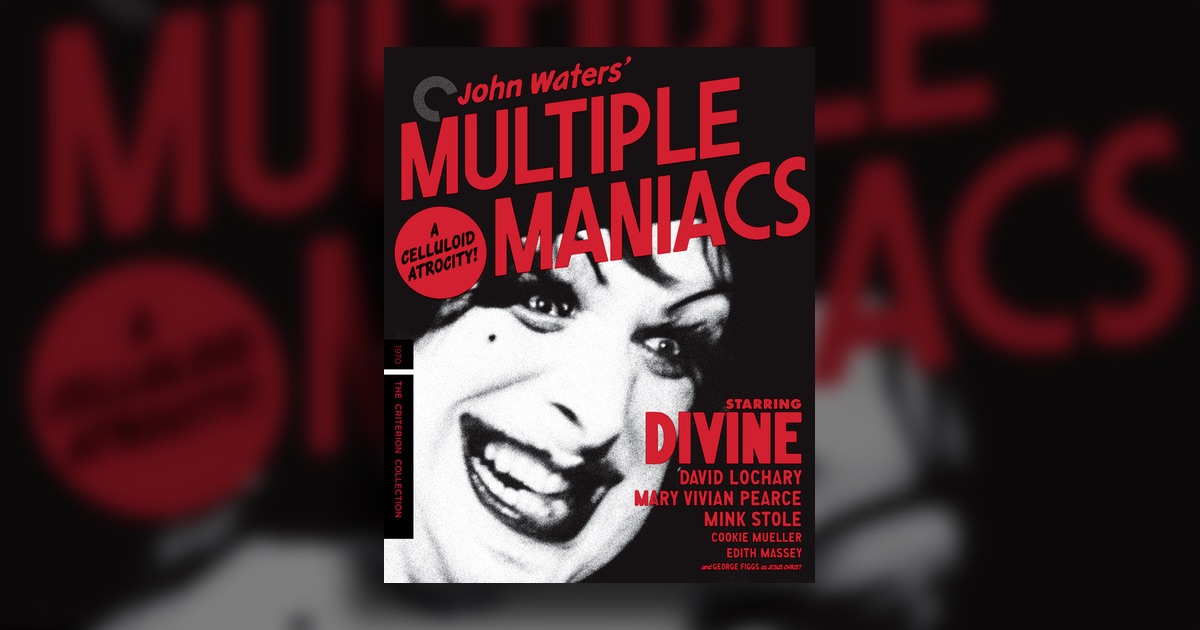 From the opening of Multiple Maniacs when Mr. David introduces us to Lady Divine’s Cavalcade of Perversion are we being introduced to John Waters’ own perversion?  And how long do we want to stay? Divine’s entrance is as an engorged Elizabeth Taylor bathed in shimmering white light furthering the early mystique of Divine and her Cavacade. From robbing to rosaries, movie posters to murder John Waters is “performing acts” as we have truly entered Waters’ World.

“Produced, directed, written, filmed, and edited by John Waters” – auteur: check. Multiple Maniacs is not a high-budget film and was certainly never screened before the hours of midnight in the 1970’s. Waters made the film for $5000 borrowed from his father also borrowing the land surrounding their house to set the film. During the making of his first film, Mondo Trasho, he was arrested by the police so the early scenes of Multiple Maniacs are set in the woods surrounding his neighborhood. The black & white cinematography allows him to mask some filmmaking techniques such as substituting chocolate syrup for blood. Cans of tuna fish and packaged bread depict the miracle of Jesus feeding his congregation with five loaves and two fishes. Waters was raised Catholic and finds his teachings ripe for derision.

Waters influences for Multiple Maniacs cross multiple genres and could be considered a pastiche of films and filmmakers he loves. He approved of films that would push the boundaries of what could be seen in US theaters. From foreign art-house films of Ingmar Bergman and Luis Bunuel to Russ Meyer, Swedish erotica to the “Godfather of Gore”: Herschell Gordon Lewis. Audiences can see some of Waters’ impressions in the posters in Cookie’s apartment. We also see the black & white aesthetic of Pasolini’s The Gospel According to Matthew during the Stations of the Cross scenes. At times we follow scenes of no dialog with music such as an early guitar-driven score juxtaposed with a late scene to Gustav Holst’s Mars, the Bringer of War. For his next film, Pink Flamingos, Water’s influences recede as the goal seems purely to shock the audience.

Is it coincidence in Pink Flamingos that the grandmother relegated to a crib is named Edie recalling the character from Grey Gardens, a film that would be released three years later?  We also see a Jackie Onassis poster on the wall in Multiple Maniacs. Waters found the actress Edith Massey who plays Edith and the Virgin Mary in Multiple Maniacs in the same bar she worked and was used in the film. The characters often play hyperreal versions of themselves wearing their own personal wardrobes for their roles and performing acts outside the lines of legality they may have fantasized of doing anyway. The dialog is fast, and viewers need to keep a dictionary handy:  “She’s an autoerotic, a coprophagic, and a gerontophilic.” Waters may just be performing “extreme unction” on the audience, coaxing us on this ride.

Why did Waters make Multiple Maniacs and his other films of cinema du filth? The film is apolitical, avoiding left or right views, and like Trey Parker and Matt Stone of South Park considers everyone open for ridicule; or as Waters calls it: humor terrorism. He attacks hippie correctness and the 1960’s. The late chase scene is like an anti-Beatles A Hard Day’s Night where the crowd is hunted by a monster rather than running hysterically after their icons. The film is of its time referencing the murder of Sharon Tate and later changing the script to account for the recent identification of her murderer. We also see what could be called surrealism for surrealism sake in an over-the-top scene late in the film. There is a sense of divinity to the scene perhaps suggesting what our gods do to us, and our protagonist is even named Divine. Both god and Divine are lost in their own depravity and are truly maniacs. Though Multiple Maniacs is actually subtler, to quote Divine in Pink Flamingos again: “Filth is my politics, filth is my life” which might be Waters’ own cinematic manifesto.

Multiple Maniacs is John Waters second full-length feature film releasing to the United States, Canada, and the United Kingdom in Criterion Collection Blu-ray and DVD. The disc features a new 4k digital restoration from the 16mm reversal film stored in John Waters’ own home. The supplements are all new featuring a commentary with Waters, interviews with cast and crew members Pat Moran, Mink Stole, Susan Lowe, George Figgs, and Vincent Peranio, a video essay by scholar Gary Needham, and a re-release trailer. Per the commentary Criterion asked Waters if he wanted to keep the mistakes in the print; he said: “Absolutely not. Let’s make it look the best it can like a bad Cassavettes movie”.