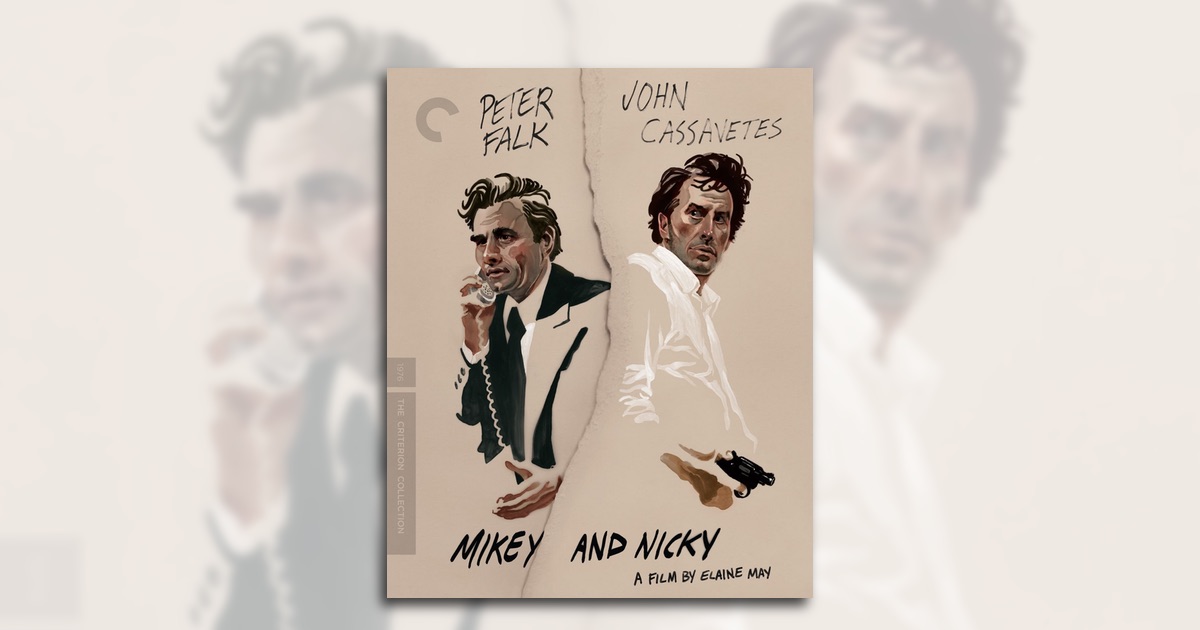 Hey kids, gather around! It’s Mikey and Nicky time! What sounds at first impression like some boisterous children’s program, Elaine May’s deeply troubled, technically flawed and semi-revered dark buddy-boy dramedy  rom-com has at last jostled its way into the Criterion Collection. Starring John Cassavetes and Peter Falk, who feed off each other’s energy with a well-practiced display of reckless abandon, and supported by a reputable crew of effective bit players, this exploration of twisted male friendship under extreme pressure over the course of one fateful night in the lives of a pair of two-bit hoods is a great fit for its new home. The film’s director is currently in vogue (check out The Complete‘s series of podcasts about Elaine May as one excellent example of her well-deserved renaissance of interest and appreciation.) The gritty urban neo-noir subject matter will make a strong impact on contemporary viewers seeing this unapologetically grainy, vintage 70s piece for the first time. The lead actors boast solid and diversified credentials as key performers in the CC catalog. Cassavetes is the subject of one of Criterion’s most lavish and celebrated box sets. He directed Love Streams, a 2014 CC release, and also plays a prominent role in Roman Polanski’s Rosemary’s Baby. Falk has been a prominent presence in a pair of releases over the past several years (2016’s The In-Laws and 2018’s The Princess Bride, and also played key roles in some of those Cassavetes films already referenced, as well as Wim Wenders’ Wings of Desire, a title particularly cherished by many a cinephile.

Cassavetes is Nicky, a petty criminal lowlife who crossed a line by stealing a thousand bucks from one of his upline bosses and now realizes that his life is in danger due to his breach of protocol. Confused and desperate, he phones Mikey, a childhood buddy who’s similarly compromised by his gangland affiliations, with a midnight cry to help him slide out of this jam and maximize whatever slim chances he may have to keep himself alive until the sun comes up. The two chums are propelled forward through the shadows of night, energized by a smart, bristling script written by Elaine May, based on characters she reportedly knew and grew up around in her formative years. As they meander their way across an urban milieu where relaxation and rest are apparently low priorities for everyone we meet, viewers are alternately charmed and appalled by the twists of buffoonery, corruption and deception that constitute the titular protagonists relationship – two guys who care deeply about each other, will put their very lives on the line for the sake of their pal, and yet recognize at a deeply subconscious yet painfully obvious level that in a pinch, they would each unhesitatingly sell out the other after feeling just a flick of the leverage that life has stacked up against them.

This grim, somewhat disheartening but also true-to-life depiction of aggravated masculine proclivities plays out through a series of strikingly entertaining and memorable vignettes. The two men veer between serving as sitting ducks for the killer who may or may not be out to get them, and inadvertently stumbling into any number of pre-ordained traps spring-loaded to trip them up, with potentially fatal consequences. Nicky’s wariness for any signal of imminent betrayal tosses a thick layer of paranoia over the top of their insomniac escapade, while Mikey’s deft employment of manipulative mind games on his increasingly unstable and adversarial sidekick keeps us persistently off-balance in our ability to predict how this nocturnal rendezvous will resolve itself. Their boisterous exchanges provoke as many cringes as laughs in viewers who either identify on some personal level with the toxic bonding on display, or at least recognize similar tendencies in those they know, love and care about, despite the undeniable character flaws evidenced by such boorish behavior. The wreckage they leave behind, in terms of all manner of insults to strangers, lovers, and family, all more or less innocent bystanders who happen to be in their wake, provides additional angles of insight and personal application to the miserable futility that unfolds over the course of the movie.

For those familiar with Mikey and Nicky, much of the lore surrounding the film has to do with the torturous route it had to endure over the course of its production and long-delayed distribution. That lamentable saga, coupled with the story of general resistance and under-utilization of Elaine May’s creative talents over the course of her stunted directorial career, provides a compelling backstory that is at least touched on in the supplemental materials on the new Criterion release. And with well over one million feet of film utilized over the course of a protracted shooting schedule, would it be asking too much for some deleted scenes or other archival materials? Other than a trailer (tellingly copyrighted in 1980, despite the film’s original limited release in December 1976), and an audio interview of Peter Falk from that bicentennial year, we get none of that. Only a pair of newly recorded talking head interviews – one with two critics providing their take on Elaine May’s artistic output, and one with a couple individuals who were involved in the making of the film – round out the disc. Though they provide helpful perspectives, they still feel like scant add-ons to the main feature, when all is said and done.

As was the case with Criterion’s director-approved package of Heaven’s Gate in 2012, I can’t help but wish that we could be privileged to a more sustained study of the studio interference and other obstacles that the creative team had to deal with. But perhaps it’s for the best that we accept the director’s willingness to let bygones be bygones and simply allow the movie to present itself to us on its own terms, without stirring up old conflicts and the accompanying resentments. There’s plenty enough pain and strife playing out right in front of us on the screen – no need to pile it on any thicker than it already is.