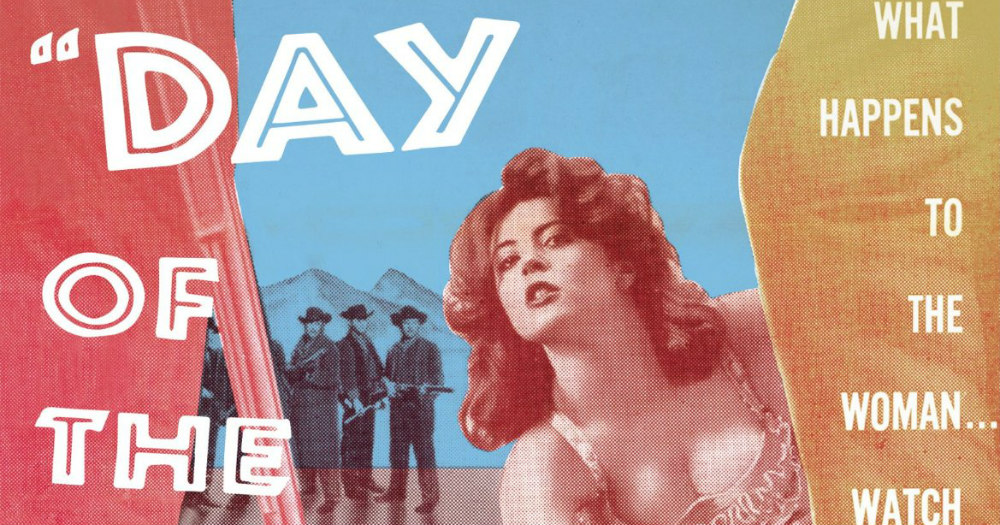 Who is the outlaw in Day of the Outlaw? Undoubtedly Burl Ives’ villainous Jack Bruhn – he leads a band of bad guys into the remote Wyoming town, holding everyone there loosely as hostages until he decides to move along. But he’s not an outlaw the way we typically understand it; for one thing, he wears a Union (not even Confederate!) officer’s uniform, and his legacy of shame is more rooted in military than more overtly criminal activities. His band of men are far more outlaws than he, but there is no singular one.

Instead, I want to pivot attention to Blaise Starrett (Robert Ryan), the ostensible hero of the story, who starts the film ready to murder a farmer (Alan Marshal) over the latter’s desire to put fences around his land, which Blaise is used to running his cattle through a couple times a year. That Blaise and the farmer’s wife (Tina Louise) have a sexual history is not far from his mind, either. Further, that this farmer-versus-rancher conflict also plays out in Shane, discussed earlier on this site, and casts the rancher as the absolute villain, puts us in a tricky moral arena right off the bat.

Blaise makes a big point of how he “settled” the still-wild land in which they now reside, drove out or outright murdered those who brought chaos to the area. Though he did these things in the name of justice, his approach to the farmer’s land demonstrates a deeper motivation to exert his design for society rather than become a part of it. He is also not an outlaw in any traditional sense, but he has defined his life outside of the law. Anyone who doesn’t conform to this is libel to be shot; the film is chiefly about recognizing that his day has passed, that everyone will benefit by his surrendering his autonomy to help form a more active community. The Day of the Outlaw is both the single day over which the film takes place, and an era of the truly-wild West that is now behind us.

Apart from such thematic concerns, the more literal day in question makes for one of the most tense Westerns produced in any era. Here is a town completely cut off (“this is the end of the trail,” Blaise tells Bruhn when he comes to town) by the severity of their weather and the remoteness of its location. They have no formal law. The general store only orders what’s needed, its shelves absolutely barren. The set design reminding one of Ordet‘s, which was filled with objects that Carl Theodor Dreyer gradually removed, one by one. Even the town name – “Bitters” – is unpleasant. Bruhn repeatedly reminds them that his men could gut this town and nobody would come to rescue them, let alone care. There’s not much they can do except hope Bruhn, the only force restraining the men, doesn’t succumb to his bullet wound before they all leave town. His men, pent-up and exhausted from a month of travel, are eager to raise hell, especially once they catch sight of all the pretty women. The feeling is akin to being trapped in a room with a hungry wolf held in place by some yarn. The wrong move could be the end of it.

Luckily, Masters of Cinema has not made a wrong move in bringing the film to Blu-ray. The harsh black-and-white photography is beautifully transferred to the digital realm, with very little damage present, and no compression artifacts that I noticed. The title sequence is naturally softer, no doubt inherited from the source, as the double exposure required to make such sequences in this era had this effect. The white of the snow stands out beautifully, though, and the transfers captures a lot of detail in the aged sets. It provides good depth, important to illustrate how far removed this land is, and how trapped they are by the wilderness. The only disc supplement is a French interview with Bertrand Tavernier, who dives into some production detail and analysis, highlighting especially what makes this so unique within the genre. That is further bolstered by Glenn Kenny’s excellent essay in the accompanying booklet, which also includes an interview with André de Toth and scans of the original press book. For those, like myself, with little knowledge of de Toth, all of this is welcome context to a fascinating filmmaker.

Written By
Scott Nye
More from Scott Nye
Ernst Lubitsch's masterpiece is as alive as cinema has ever been.
Read More