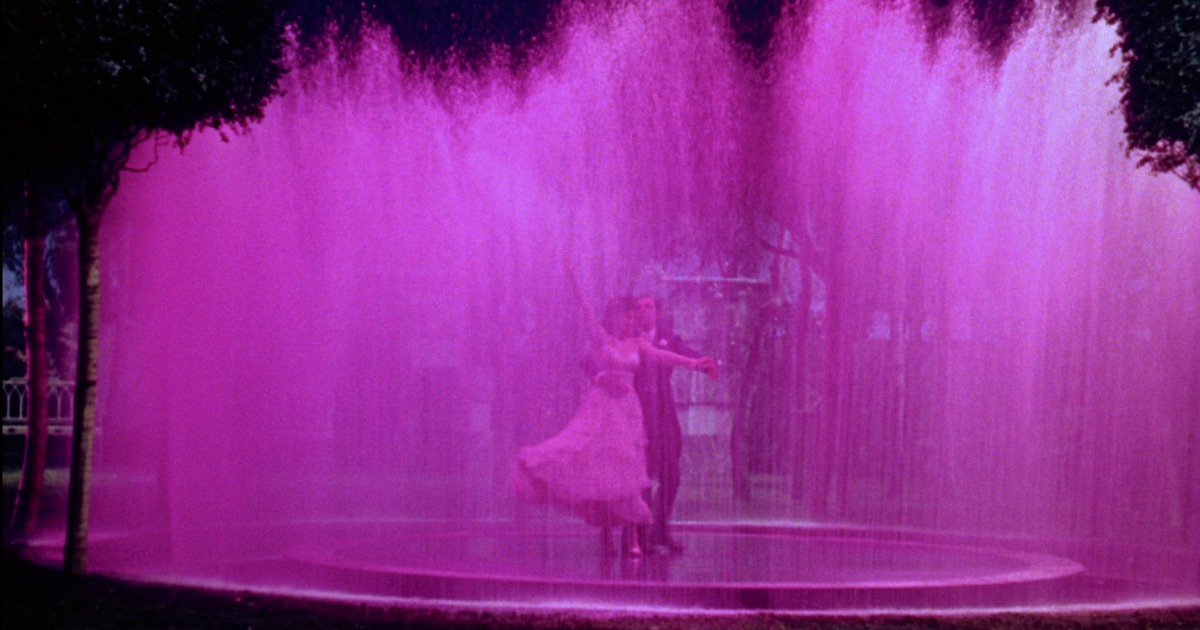 The musical is far and away my favorite film genre, and there are three filmmakers I turn to most for that purest of highs – Jacques Demy, Stanley Donen, and Busby Berkeley. Demy did it best (with The Young Girls of Rochefort); Donen did it most consistently (On the Town, Singin’ in the Rain, It’s Always Fair Weather, and Funny Face amaze just about equally); and Berkeley did it the most wildly, with the least restraint. As audacious and astounding as the grand musical numbers of 42nd Street, Gold Diggers of 1933, Footlight Parade, or Dames got, though, The Gang’s All Here finally gave him an entire feature to dance about in Busby Berkeley Land, where everyone smiles and geography is meaningless.

The plot, you say? Well, all right. There’s a soldier (James Ellison) who falls for a nightclub singer (Alice Faye) – only he’s been engaged since childhood to the girl next door (Sheila Ryan), who seems to be quite looking forward to his finally returning. The soldier gives the singer a fake name on the one night they spend together, so when she ends up at a grand welcome-home ball that his father (Eugene Pallette) is putting on, only Phil Baker (as himself) is in the position to put two and two together. Not that he’s terribly concerned; he’s happier to find himself reunited with the girl-next-door’s mother (Charlotte Greenwood), with whom he put on several shows in Paris, long before her stuffy husband (Edward Everett Horton, who else) encouraged her to leave that sordid life behind. And along the way Carmen Miranda steals every frame she’s in. 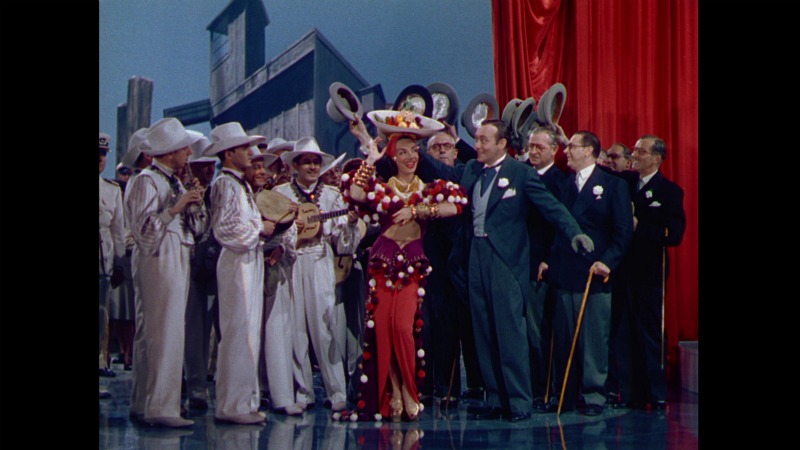 But the film is far more ethereal than that. It’s about Berkeley’s sometimes deceptively complex camera movements, and the way his performers parade through them. The opening shot of the film alone is an three-minute-plus odyssey that takes us from a near-abyss (a half-lit face shoved into the corner of the screen) to a stringed instrument to a boat docking to seemingly an entire supermarket’s produce section growing out of Miranda’s head to a mariachi group and a marching band and a car pulling up and just when you think you have this thing under control, the camera pulls waaayyyyy back and it turns out the entire thing is a stage show! And that’s the first shot of the film.

I could go on, describing unbelievable sequence after unbelievable sequence, until I finally get to the kaleidoscopic, journey-beyond-the-infinite finale and finally lack the vocabulary to communicate what was onscreen. Better to let you discover it for yourself. What does it all mean? What’s it all about, in its bones? The Gang’s All Here is too good for that. As Robert Sullivan wrote about Todd Haynes’ intentions with I’m Not There, Berkeley didn’t make a movie about anything; he made a movie that is something. 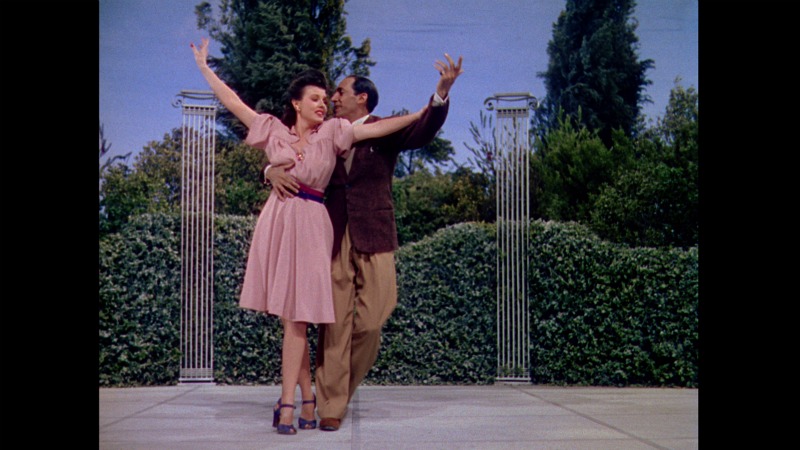 That “something” would be easy to write off as camp – the performances are heightened (and, especially in the case of Ellison, fairly untrained), the colors are bright, and the whole effort is just so damn earnest. Why good-naturedness should be treated as suspect is beyond me, but the purity, the beauty at the center of The Gang’s All Here is neither asking to be taken seriously nor worthy, precisely, of derision. Berkeley’s an immensely sophisticated filmmaker, recognizing that something can be both ridiculous and honest, reflecting the purity of our innermost desires. During Ellison and Faye’s first date, she dives into a rendition of the film’s anthem, “A Journey to a Star,” cuing the orchestra with the wave of her hand. “Hear the orchestra?” she asks Ellison. “Yeah,” he replies, surprised. “Where’s it coming from?” “Where’s your imagination?” she asks. Berkeley almost seems to be challenging his doubters, and rewarding those willing to take the journey with him.

While the film in some ways allowed audiences to ignore the brutality of war with a bit of escapism, in others it carried on Berkeley’s key theme with his Depression-era musical numbers – that, when we band together, there’s nothing we can’t accomplish. It’s easy to look at his dozens of chorus girls moving in near-perfect synchronization and suspect he’s treating women like objects (and by most accounts, he was not the kindest director as far as that goes), but the feeling communicated is far more resonant. Ten years prior, it meant picking the country up from economic collapse. Now, it means defeating fascism. Berkeley doesn’t push the correlation (perhaps he didn’t even recognize it), but his escapism is anything but. Inspiration is not escaping from the world’s problems, but discovering in oneself the ability to contribute, to help make a difference. So when they ask the audience to buy war bonds at the final title screen, as was common in films made during the war, the plea is far more in keeping with what The Gang’s All Here was all about. We’re all a part of this great big dance floor, and even the uncredited dancers help make it a beautiful place to be. 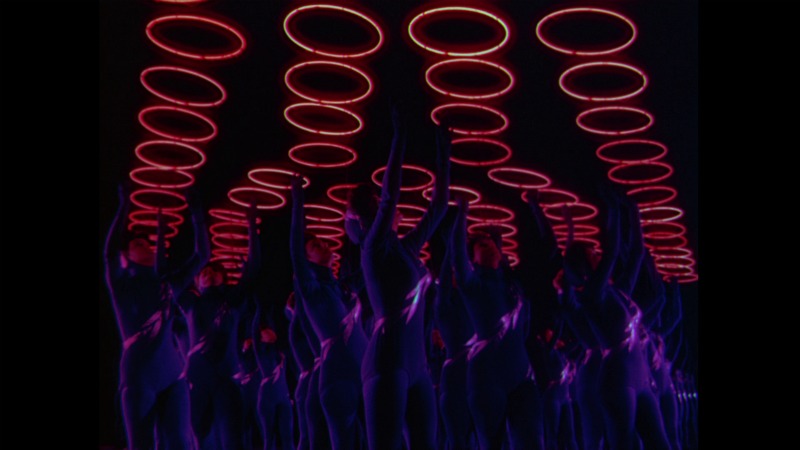 Following the restoration that toured a few years back, The Gang’s All Here is now available in a gorgeous Blu-ray edition from Masters of Cinema. Blu-ray probably wasn’t literally made for Technicolor, but its invention finally crafted a home video format that could hope to replicate the wonders of that grand old medium. The colors are faithfully reproduced – they neither “explode” off the screen in that too-familiar over-saturated fashion, nor do they appear at all faded. Grain is consistent, very natural. Sharpness suffers somewhat in some optical process shots (visual effects of their day – combining two or more shots into one), but that’s inherent to the limitations of 1940s film technology, and only applies to a couple shots. Overall, it’s a very fine transfer, one that is sure to bring the film alive to new viewers the world over.

The disc only has a couple of special features, but they are of the most worthwhile variety. The best is a commentary track with film critics Glenn Kenny and Farran Smith Nehme and film historian Ed Hulse. They provide a wealth of historical analysis, from the production of the film itself onto its rediscovery in the 1970s and its continued appreciation today. Kenny and Hulse share stories from their own personal interactions with Alice Faye on the repertory circuit, and all three are quick to call out particular sequences to which they are especially attached. It’s a great balance of personal appreciation and scholarly analysis, allowing for the slight differences of opinion each person brings while allowing that diversity to prop up the film even more. Their discussion of Faye in particular really opened me up to what she’s doing here. 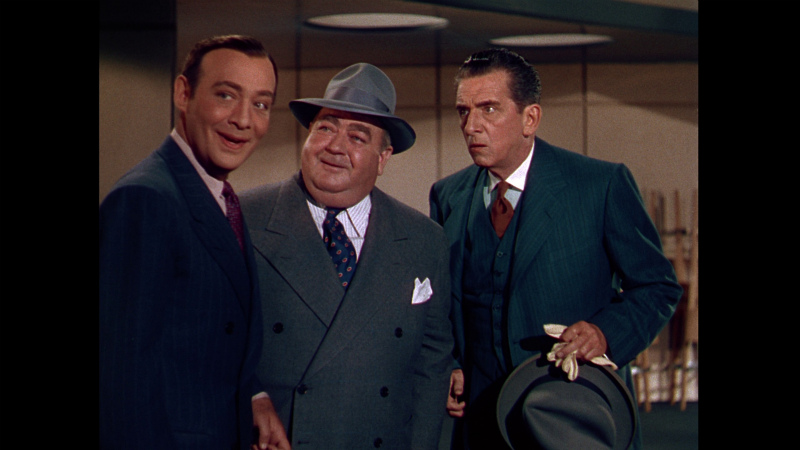 They’re supported by a twenty-minute featurette that looks to be ported over from an old DVD release. USC film professor Rick Jewell and Miles Krueger, President of the Institute of the American Musical, focus their thoughts on the film as it relates to Berkeley’s career, covering some of the same ground of the commentary, but offering a very solid, thorough overview given the time they’re allotted.

Lastly, we get the characteristically stellar booklet, this time with essays by David Cairns and Karina Longworth, who each offer lively, engaged readings of the film, Berkeley, and the legacy each have left.

It’s another fantastic package from Masters of Cinema, more than I ever could have dreamed this wonderful film would receive. Classic Hollywood musicals are usually held tightly by their respective studios, prohibiting access from distributors more inclined to offer scholarly appreciations, so this is an especially welcome development. I hope it is the first of many more, but even if not, it is extraordinarily valuable all its own.