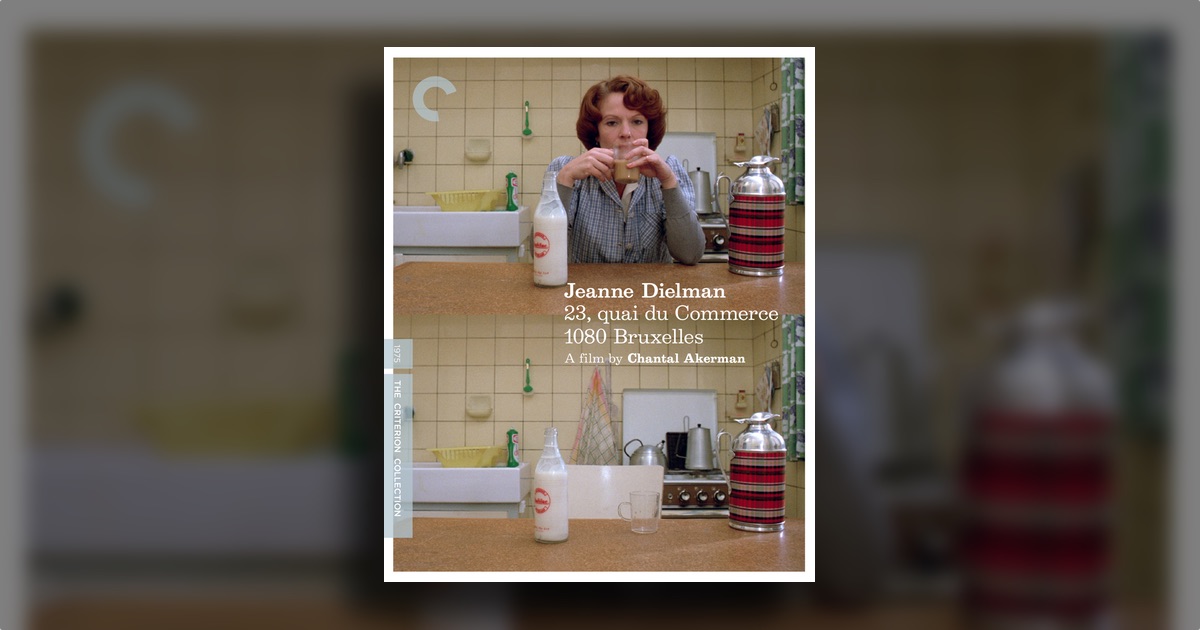 Jeanne Dielman, 23, quai du Commerce, 1080 Bruxelles is a thriller. It’s as claustrophobic, psychologically penetrating, and exactingly-directed an apartment film as anything Roman Polanski has made. That it takes 200 minutes to watch is almost besides the point. The more you give yourself over to it – shutting out distractions, not breaking it into sections – the tighter its hold. I’ve seen the film three times now, twice at home with all the intrusions that comes with that, and once in a theater with all the peace it suggests. Except, peace for this film means an acute focus on its inner torment.

Jeanne (Delphine Seyrig) is a widow raising her teenage son in a single-bedroom apartment (he sleeps in the pull-out couch in the living room). Over the course of three non-consecutive days, we see Jeanne cook, clean, run errands, knit, read letters, and cook some more (there’s a lot of cooking). Every moment has its duty. Most of them are self-assigned. The one time she absolutely has to be somewhere is in the late afternoon, when men come to the apartment to pay her for sex. The money goes in the pot, and comes right back out for upkeep.

Most of the film is spent watching her tend to her chores. The prostitution angle gives it a bit of pulp and sleaze that adds to the genre appeal of the film, but the thrills don’t come from a john who won’t pay or kinky sex or anything of the sort. The thrill is in watching Jeanne’s carefully-ordered life unravel in tiny, untenable ways. The film is a summation of every minor inconvenience you’ve encountered. If you’ve ever become disproportionately angry in a long line, with a chatty acquaintance, at the falling of a needed utensil, or at a ruined meal, this film will set – and keep – you on edge for every second of its running time.

Writer/director Chantal Akerman wasn’t even twenty-five when this film was released (meaning she beat Orson Welles to the punch in making a masterpiece – he was already that age when he made Kane). By her own admission, the insights into middle age the film exhibits were generated by watching her mother perform these same tasks with the same exacting approach. Though Akerman uses these routines to drill into Jeanne’s psyche, suggesting their repetition fills an absence of an inner life, I’ve always found Akerman and Seyrig’s expression of them to be quite loving. I find so much pleasure in watching her cook or carefully make her bed. There’s a suggestion in Seyrig’s near-smile that they are her few happy moments; certainly a notable lift over her mood when engaging in any kind of social activity, including that with her own son. That smile is one small example of how Seyrig coaxes us along, suggesting any number of possible thoughts that fill Jeanne’s time, giving us enough to keep our interest but not nearly enough to satisfy our curiosity.

Akerman and cinematographer Babette Mangolte take a fascinating approach to the storytelling, returning to similar set-ups that differ in small ways, much how Jeanne’s days are familiar but growing slightly dissimilar. Few shots of her preparing dinner are exactly the same, some lens length or focal point or precise camera position differing from the rest. These are also the only shots to obviously use a wide-angle lens, causing her to appear quite different when she’s preparing a meal. We learn in the behind-the-scenes documentary included on this disc that this was a practical solution, born of cramped quarters and a need to show as much space as possible, yet it creates a fascinating diversion in a theoretically-pre-programmed film.

One of the things that surprised me most when seeing it on film recently is how rigidly Akerman and Mangolte kept their focus. One might wonder if the projector had fallen out of focus when we view characters at a distance, only for the eye to drift to one side of the frame and see a nearer cabinet sharp and well-defined. That choice was not as evident on the somewhat-soft DVD Criterion put out in 2009, but is abundantly clear on their new Blu-ray release, which utilizes a 2K restoration supervised by Akerman and Mangolte. The transfer is really a wonder, not only (mostly) free of blemishes, but appropriately soft and faded for a mid-70s European production, without losing the depth and clarity one desires from high-definition. I know I tend to be a bit easier on Criterion for the cries of “compression!!!” that have tagged them in fan circles (especially surrounding lengthy movies) since they began their Blu-ray endeavor almost ten years ago, but I noticed no such issues here. Just a rich, vibrant image, slightly-less-colorful than the print I saw (where the red in Jeanne’s hair and lips really popped), but with little lost integrity and quite a bit more consistency.

This is a straight upgrade from Criterion’s DVD edition, so supplements are exactly the same, just whittled down to one disc instead of two. In either form, it’s an exceptional release. Criterion put together their own characteristically-excellent retrospective interviews with Akerman and Mangolte, as well as clips from Akerman’s TV appearances in 1976 and 1997, and a 2007 interview between Akerman and her mother. Their relationship is more elaborately-explored in Akerman’s final film, the masterful No Home Movie, but this suggests much of the pleasure in their relationship.

The real standouts supplements, however, are two bonus films. Saute ma ville was Akerman’s first film, and even at 13 minutes shows a lot of the impatience and bluntness one might expect from such a thing (she was only 18 years old when she made it, after all), but it’s a very valuable inclusion, especially as it has also been restored and looks quite nice. Best of all is Autour de “Jeanne Dielman”, an hourlong documentary shot by Sami Frey (who’s better remembered as an actor, and starred in Godard’s Band of Outsiders) and edited by Akerman and Agnès Ravez. Filmed during the production of Jeanne Dielman, the documentary provides an uncomfortably-candid look at the process of creating a fairly low-budget film with a fairly massive star, and all the clashes between the still-fresh filmmaker and the polite-to-a-passive-aggressive-fault lead actress. In some ways, Seyrig is teaching Akerman how to direct, asking question that clearly annoy the younger woman but which are vital when you realize how much Seyrig is giving to each little, endless moment.

The release also includes a booklet, slightly redesigned from the DVD edition, with an essay by film scholar Ivone Margulies.

If you’re as fond of Akerman as I, this release is a must-have, a very worthwhile upgrade of the landmark DVD edition. If you’re new to Akerman, this is the most obvious and daunting place to start, but be prepared to give your all to it.