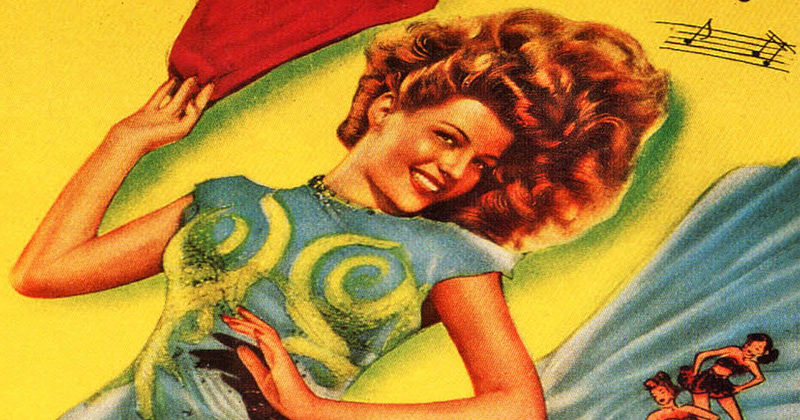 How did a film like Cover Girl slip away? When it was shown at the TCM Classic Film Festival in 2012, it was considered something of a discovery, with Robert Osborne frequently singling it out in pre-festival interviews and publicity as a must-see, which makes me feel a little better about having not heard of it at all before seeing it a few months prior at the New Beverly. But the film was immensely popular in its day. Its success instantly pulled Gene Kelly out of limbo at MGM, where he’d been assigned to a series of B-movies and rarely allowed to dance his own choreography, when he was even allowed to dance at all.

Columbia Pictures was not interested in placing such limitations on him. The film’s producer, composer Arthur Schwartz, must have known how lucky they were, because they gave Kelly immense control over its production, especially his dance numbers. The result is that, when he and costars Rita Hayworth and Phil Silvers dance out of a cafe onto the street, those familiar with Kelly’s more famous work in On the Town or Singin’ in the Rain will instantly recognize the birth of a now-familiar style, more vibrant here for the fact of his seizing his moment. There’s a notion in art appreciation that something truly radical and original never loses its bite, and that is quite true of what Kelly accomplishes here. It’s joyous and bounding and a little bit bawdy. It is the very essence of the Technicolor musical dance.

And yet the film is not all joy. It has everything. It’s got singing, it’s got romance, it’s got humor – you’ll laugh, you’ll cry, you’ll scream in joy, the whole nine yards. It could feel disjointed, but life is disjointed like that. One minute you’re in high comedy, the next you’re completely depressed. Rita Hayworth plays Rusty, a chorus girl at a cheap nightclub who finds the chance for fame and fortune in an audition to be the new cover girl for a major fashion magazine. It just so happens she’s the spitting image of the elderly editor’s boyhood crush, Maribelle, played in flashbacks, of course, by Rita Hayworth. Rusty’s boss and boyfriend, Danny Mcguire (Kelly) is none too happy about her ambitions, and his stage partner, known only as Genius (Silvers), is just trying to keep everyone happy.

I’ve written a lot about how World War II brought melancholy to the American cinema. Whereas melodrama in the silent and early sound era dealt in major upheavals, death, and violence, from the onset of the war forward, the genre was more concerned with quiet disappointment and the inevitability of impermanence. Cover Girl may be a musical in billing, but it’s a melodrama in tone. It deals head on with the frustration and sadness that comes when close friends realize they want different things from life. Danny and Genius enjoy their modest club. They like the work and the people. They like their small traditions. They like longing and hustling. But Rusty didn’t move to New York to long, and certainly not to hustle. She came to succeed. And now that she’s found success, where does that leave everything else?

America in 1944 was at war, but it was going quite well, and victory was felt to be at hand. The past fifteen years had seen the country plunge into the Great Depression, work itself out of it, and climb to the world stage as it secured victory for democracy. Not everyone would be coming home, but essentially, the incredible national effort had paid off. America was a success. But that’s not always an easy thing to live with.

I’m not trying to read Cover Girl as a straight allegory for the national spirit, but films tend to succeed when they reflect the way a lot of people feel at the time they come out. And Cover Girl clearly struck a chord. The only musical more successful at the box office that year was also the only one sadder than it – Meet Me in St. Louis, another joyous Technicolor extravaganza about impermanence, disappointment, and melancholy. Meet Me in St. Louis is the better musical, its songs catchier and more bound up in its story than Cover Girl’s. But Cover Girl is a wilier, more inventive and daring film, a true original.

Its most-talked-about moment, with good reason, comes when Danny, despondent that Rusty has abandoned him one evening, sees himself in the reflection of a shop window and allows the mirror image to personify all his doubts and frustrations. The reflection then leaps from the window and the two dance in a battle for his soul. It’s not only an astounding technical achievement, with both Gene Kellys completely in time with one another, but a beautifully performed one. Kelly plays both sides distinctly, his reflection constantly keeping an eye on the “real” one. This acting choice would never work without the movie magic at work. We know Kelly isn’t literally in the room with himself, or the glances would come off as cheats, as one partner watching the other to ensure he stays on time. But because we know they’re filmed independently, we recognize that Kelly is conveying the reflection’s uncertainty and obsession with his owner.

Kelly the great dancer is not always acknowledged to be Kelly the great actor, but not everyone’s seen Cover Girl. If they had, they might recall the way he clenches himself against pillars and walls. They might know how his voice sounds when he’s hurt but trying not to show it. Or when he can’t quite figure out why he hurts so much. “Melodrama” is musical drama, and beyond his calls to sing or dance, Kelly’s voice is an ideal instrument for the hope of resilience. It conveys both pain and strength; it’s somehow both earnest and cynical.

Hayworth is not especially known for her musicals now, but they were quite important to her in the 1940s. She broke through with The Strawberry Blonde in 1941, starred on two more with Fred Astaire, then made Cover Girl. Her most famous scene in Gilda, arguably her most iconic role, is a musical number. Astaire liked her best as a dance partner; as a Ginger Rogers fanatic, I’m furious, but as a straight man, I understand his impulse. Hayworth has a way of bounding across the screen and complimenting her male costar. Despite her intimidating good looks, it took her awhile to seem natural in wielding them. That she’s absolutely gorgeous only deepens Rusty, who looks like Rita Hayworth yet is incredibly shy in auditioning or even meeting new people. There’s something sort of touching about that.

Cover Girl had previously been released in a sort of unstable edition from Twilight Time, with a grand total of zero supplements and a slightly blown-out, faded transfer. Aren’t you mad it’s gone out of print. Masters of Cinema’s new edition, utilizing a new 4K restoration, doesn’t totally solve these issues, but looks a hell of a lot better than that ever did. Skin tones are warmer and truer to that sort of glow Technicolor could really give, Hayworth’s iconic red hair really shines, and depth and detail are far better resolved. In terms of supplements, Baz Luhrmann provides a short, fine interview commending the film, and Farran Smith Nehme provides an essay for the booklet, which unfortunately I do not have access to. But she’s terribly smart, and the film’s well worth picking up even if it were another bare bones release. I had let myself doubt my initial reaction, certain over the years that I’d overvalued it five years ago, but revisiting it now, with so different and more fulfilling a life than I had then, I was still bowled over by the depth of its wit, curiosity, and feeling. It’s a magnificent film.