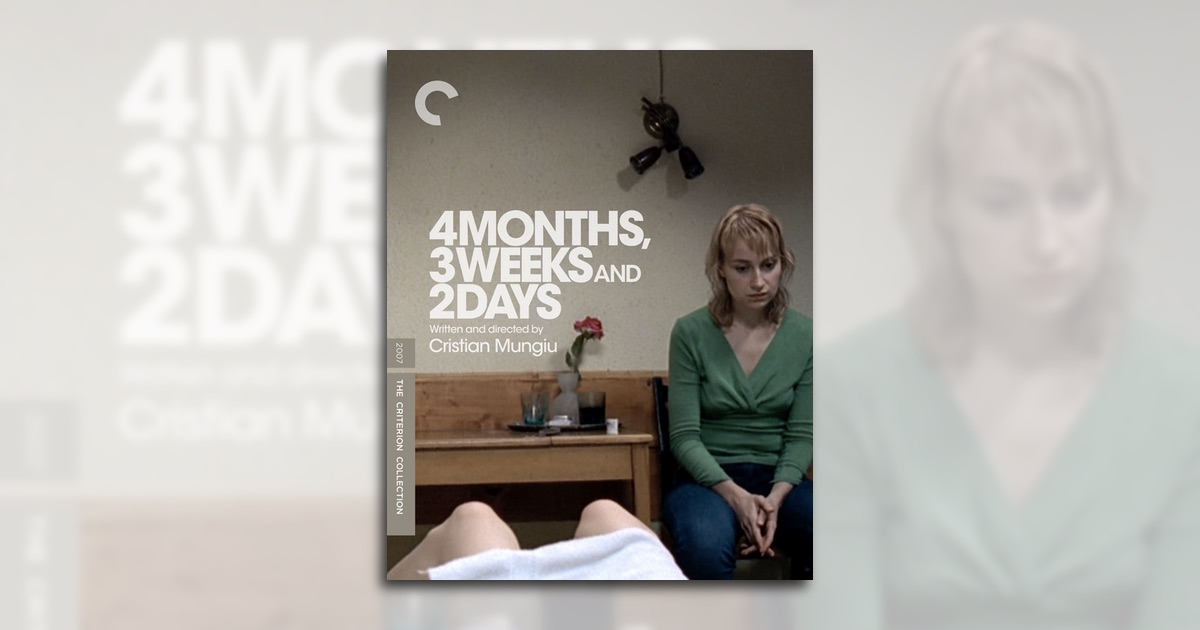 Gabita (Laura Vasiliu) needs an abortion, but in 1987 Romania, it’s illegal. She’s not terribly resourceful herself; perhaps consequently, she’s not our protagonist. That role falls instead to her roommate Otilia (Anamaria Marinca); the film could just as well been titled “A Simple Favor” if that one wasn’t already taken. Over the course of the day the procedure is to take place, Otilia will go above and beyond for a friend who’s doing very little to help herself. Were their roles reversed, it’s hard to imagine Gabita lifting a finger. But without coming to any conclusions, writer/director Cristian Mungiu questions the audience not only about the morality of the operation, but about basic civic duty, government structures, and loyalty, shooting his film through with the anxiety and fear that haunts most of our lives, even if we’re not doing anything near as illegal.

4 Months, 3 Weeks and 2 Days premiered at the 2007 Cannes Film Festival, where it became the first (and so far only) Romanian film to win the Palme d’Or. It has become the key film in the Romanian New Wave, and is without a doubt one of the landmark achievements of world cinema in the 21st century. It seemed to have absorbed the faulty state of global politics at the time of its release, trapping its characters in a world they cannot abide, but in which they must exist, where debating or challenging the cultural and bureaucratic forces at play becomes pointless when your immediate objectives are so clear. It’s brilliantly photographed, its long-take aesthetic even now – after a decade of imitations – as vibrant as its first pass through the projector. For such a seemingly straightforward story, nearly every shot accomplishes something only film can do, worming the audience into Otilia’s point of view without betraying the distance between her and the camera. We’re simultaneously left desperate to know what she’s thinking while feeling we have a complete read on her. It’d be easy to say the film judges nobody if we didn’t feel her constant anxiety around everyone, yet we do not feel any more tethered to her than we do ourselves. Living in a society asks us to look outside ourselves, but what of a society where nobody seems to? Otilia seems to stand alone in this regard, making her mission all the more insurmountable.

Overdue for a Criterion release, the edition released this week appears slim on the surface, but packs a wealth of insight.

One of Criterion’s most laudable “mission statement” level goals is to get a director’s approval on their editions whenever possible. This has lead to some frustrations, as films will get delayed for years making their way to home video (Cristian Mungiu’s own Beyond the Hills, which premiered in 2012, only just got a disc release last year) awaiting their director’s involvement and signature. Sometimes, too, the edition will make an opportunity to reconsider film, sometimes in relatively small ways (the color timing being the most common), but not infrequently in a much grander fashion – I think especially of the new cuts of Mr. Arkadin, Ride With the Devil, or The Tree of Life that made their debut in The Criterion Collection.

Somewhere in the middle is the “re-framing,” where a film with subtly, but very demonstrably, change shape. The most overt example is On the Waterfront, which included three different aspect ratios to fit the film in. More broadly, Criterion has made a habit of releasing in widescreen a number of films previously only available in the Academy ratio – Paths of Glory, The Night of the Hunter, and Anatomy of a Murder, for example. Last year, Sofia Coppola refitted The Virgin Suicides to 1.66:1. And this year, Cristin Mungiu has “reformed” his landmark 2007 film 4 Months, 3 Weeks and 2 Days from 1.85:1 to 2.35:1.

In their release notes, Criterion has labeled this the original aspect ratio, and I haven’t the first hand knowledge to support or contradict this claim; IFC released the film on home video in 1.85:1, and that’s how a lot of us saw it. In that context, the change feels like a substantial adjustment – given that the film takes place largely in close quarters and square rooms, the boxier aspect ratio “feels” more suited to the subject, but it didn’t take long for me to catch on to just how ideally the compositions fit into the wider frame, and how few felt “cut off” at the top. As DVD Beaver’s comparisons illustrate, some shots gain the side while others lose on the top. I wonder how the original negative of the film truly looked, and how it was framed in the camera, but perhaps such concerns don’t matter. Rather than feeling packed in from all sides, the new aspect ratio lends a different reading to Otilia and Gabita’s conflict – that their oppression comes from the top (their government) and bottom (their cultural foundation), that the range of acceptable behavior depends on squeezing through the middle.

The quality of the transfer itself is superb. I never thought of the film as one rich with color or texture, but this new 4K restoration boasts both, immediately evincing a robustness and character that greatly benefits the film. Otilia’s near-iconic green sweater stands in stark contrast to all around her – there doesn’t seem to even be much plant life in Romania – and it necessarily pops in each scene she’s in. The depth of field is very well-handled, allowing so much of the background to inform what happens in the fore. Otilia’s final nighttime journey, rightly heralded for taking on increasingly abstract tendencies without at all abandoning the aesthetic Mungiu and cinematographer Oleg Mutu established, is kept just as dark as you remember, thankfully. Mungiu supervised the restoration, and he doesn’t seem to have forgotten what precisely made the film so powerful.

As I noted, this only appears to be a slim edition, offering a couple interviews, a short documentary, a press conference, and some deleted scenes. The press conference comes from the Cannes Film Festival, and has a few insights but mostly has the same limitations as any Q&A session – those most eloquent in the audience more interested in themselves, and those who are interested in the filmmakers can’t come up with a decent question. The rest of the supplements pick up the slack, especially the 38-minute interview with Mungiu, who guides the film away from the abortion debate that understandably guided its discourse upon its release, focusing instead on the aesthetic and acting choices made within the film, and explaining in detail just how they went about getting there. He emphasizes the collaboration and hard work of his cast and crew, particularly in establishing rhythms in scenes that involve very little cutting, and the sometimes pure-luck inspiration that lead to some of the film’s most indelible moments.

Film critic Jay Weissberg jumps in for a 25-minute lowdown on the history and development of the Romanian New Wave, admitting as one must that its participants didn’t much like the term, but what else do you call it when a country goes from producing zero films in 2000 to a rush of landmark cinema that culminates in the Palme d’Or seven years later? It’s a great summary on the movement for those unfamiliar, using 4 Months as a template for illustrating the movement’s common characteristics.

The Romanian Tour is a short film accompanying the roadshow exhibition of the film in Romania. As noted, just a few years prior to its release, Romania was not making many films, and had very few places to show them, so the local distributors hired a crew to go from town to town, set up a screen and projector, and show the film in any space that would have them. We also get brief interviews with audience members, most of whom bemoan the state of exhibition in their country, a few of whom noting that they haven’t seen a film theatrically in many years, sometimes decades, until this one came to their town.

Finally, there is one deleted scene and two alternate endings. The deleted scene was smartly removed and the alternate endings aren’t as good as what they went with, as is typically the case with this sort of thing. Finally, there is a fold out leaflet with an essay by scholar Ella Taylor that beautifully draws out the film’s quality and lasting impact.