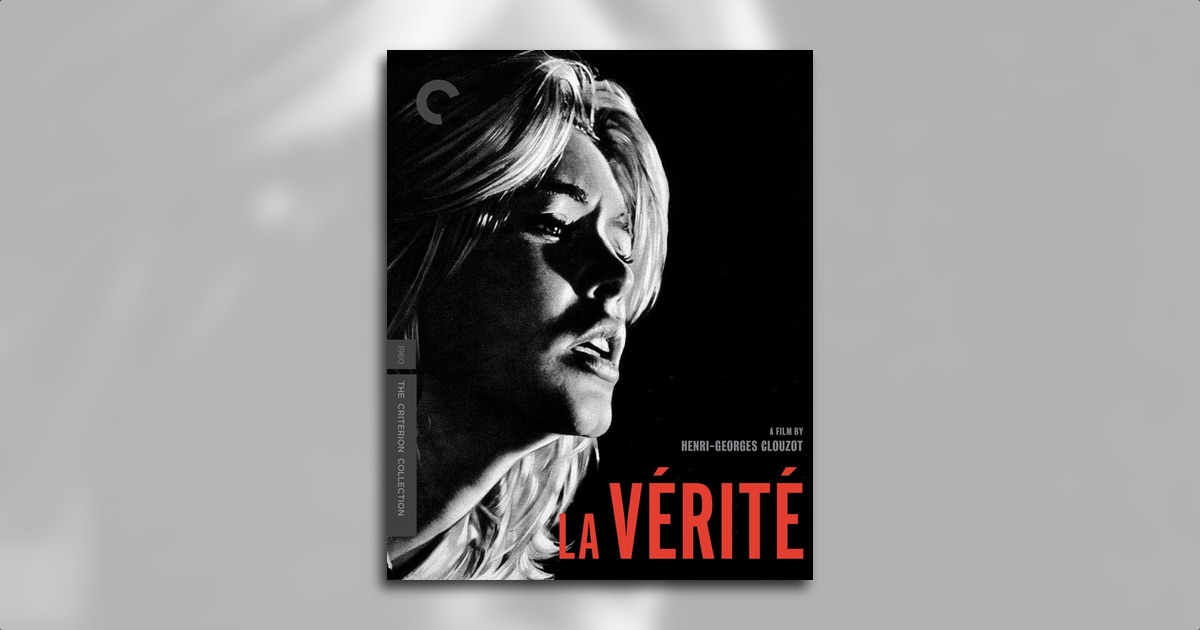 Henri-Georges Clouzot’s La vérité is, on its surface, a courtroom drama that puts a young woman on trial murdering her lover. Clouzot had spent his career in the mystery genre, honing it for French audiences so successfully that he was often compared with Alfred Hitchcock. Though far less prolific, such classics as The Murderer Lives at 21, Le Corbeau, and Les diaboliques made clear his mastery of the genre, his ability to weave clues amidst personalities and draw out tension while advancing story.

Thus, it should come as little surprise that Le vérité functions extremely well as a straightforward legal thriller. Clouzot quickly establishes the personalities of the attorneys (Charles Vanel and Paul Meurisse) so that the exposition the actors are loaded with never comes off merely as such, but is somewhat filtered through their own distinct quirks. The French legal system, which I’ve seen depicted in enough films to know I will never precisely understand it, is thankfully quite streamlined (this being one of many French films of the time financed by Columbia Pictures is perhaps the motivation). Clouzot, who cowrote the screenplay alongside a small battalion (mostly women), deploys new clues and objections and twists and just the right moments so that this over-two-hour procedural never drags.

But this isn’t merely a procedural (not that there’s anything wrong with that). This is an investigation into a whole new generation, epitomized by its star and subject, Brigitte Bardot. She emerges from a rowdy crowd of prisoners silently, entering the courtroom with little indication of who she is or where she’s been. The course of the trial is less about whether or not she did it – of course she did – than why she did it, or why she did anything she’s ever done. Why did she abandon her provincial parents to move to Paris? Why did she take advantage of her sister’s generosity? Why did she seduce that same sister’s boyfriend (Sami Frey), and in turn nearly ruin his own promising musical career? Why can’t she make something of herself, instead of laying about and dancing and making love? Just where does she get off, anyway? And just what drives such a woman? Maybe this is more a French trial than I gave it credit for.

Clouzot had his own share of such questions posed to him. Having worked in the film industry during the Nazi occupation of France, he was convicted of collaborating with the enemy and nearly banned from filmmaking for the rest of his life. Bardot, in turn, had taken the country and world by storm, mostly with a series of playfully sexy mainstream French films like La Parisienne, Plucking the Daisy, Naughty Girl, and School for Love, but it was the era-defining, taboo-breaking And God Created Woman that seized the public’s imagination even as it left little to it. With that film, Bardot became the face of the postwar generation. She and her peers were born either into poverty, war, or the road to either, but were coming of age at a time of great prosperity. Some responded by meeting it with great ambition, others stayed lost in thought, and many just wanted to live fast while they still could. And God Created Woman is still an incendiary experience, not tamed one bit by the intervening sixty years, and it’s easy to see why the generation or two before her – which had sacrificed so much for their freedom – looked at the results and were perplexed, if not outright angry.

This energy pulses through La vérité, which never pulls its punches in depicting Dominique’s faults – she is lazy and restless and backstabbing and needlessly, thoughtlessly cruel. But this doesn’t deter Clouzot from sympathizing with the way she is villainized in court far beyond the point of her actual crime. Few in the courtroom seem to even despise her for what she’s done than who she is. Or what they’ve decided her to be. The uneasy parallels between Dominique’s and Bardot’s biographies, especially Dominique’s early suicide attempt, further align the two, as does Dominique’s considerable resemblance to And God Created Woman’s Juliette – the same wild energy, the same sexual appetite, the same desire to throw tradition on its head in favor of a good time.

The film is also at another precipice that I doubt it quite anticipated. It premiered in 1960, the same year that Breathless redefined the modern cinema, and especially redefined the public’s conception of young people, and the way those same young people saw themselves in movies. La vérité too serves as an interrogation of a burgeoning cultural revolution, one that was now of age to define itself rather than have itself defined those twice their age. Clouzot, for all his sympathies and all his skills, was in his fifties when he made the film, and still views Bardot and the younger crowd as a subject, not as his peers. For those who know the period, this tension is as exciting as the dramatics.

Criterion brings the film to Blu-ray with a lovely new 4K restoration carried out by Sony Pictures, and it’s one of their better efforts, I don’t mind saying. The grain is healthy and robust without crowding out the picture, which bears out terrific density and dimension. The low-contrast cinematography, which all hues around a certain dark gray, is terrifically reproduced, no details getting shoved into crushed blacks or blown-out whites. Certain “process” shots are grainier, naturally, but that’s inherent to the source. Largely, this is as good a black-and-white transfer as I’ve seen come from a major studio.

Aside from a very good essay by Ginette Vincendeau, which reads the film as a broader interrogation of women in general – bringing in specific, real-life cases from which Clouzot and his team drew inspiration – Criterion didn’t produce any new supplements for this edition. They’ve included the 2017 French TV documentary “Le scandale Clouzot,” which provides a fine overview of the director’s career. Like most modern documentaries of its type, it’s heavy on talking heads, montage, and narration; I find these sort of things mostly unwatchable purely for aesthetic reasons, but if you prefer it to reading a long article or two on him, it’ll get you there. Elsewhere on the disc, look for an interview excerpt with Clouzot from 1960 that runs only five minutes but is extremely compelling (this is how much times change – the interviewer straight-up asks Clouzot if he wishes he’d cast a better actress), plus twenty minutes from a 1982 documentary on Bardot. It mostly deals with her personal life, and the insanity of the press coverage around the time she had her son. They get into La Vérité for about four minutes, right in the middle.

All in all, a decent edition, somewhat slim in both quantity and quality of supplements. The film is stellar and presented fabulously, but these days, that’s not quite enough to recommend $20 be spent on it.