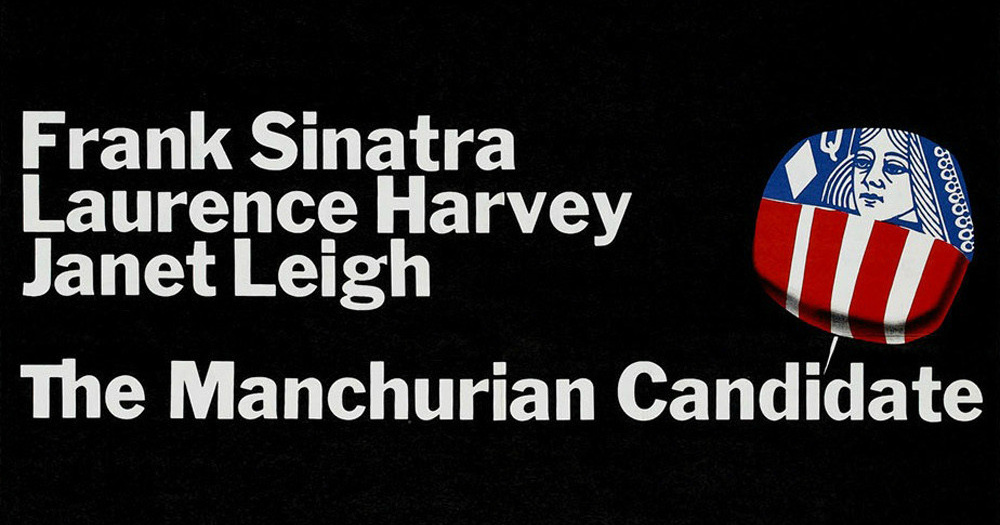 From a structural standpoint, The Manchurian Candidate is an odd sort of thriller. The first hour is spent dropping clues and suggestions, deterring the hero’s claims, and mostly providing a ton of exposition that will pay off in the second. But once the plot really kicks into action, the chase is hardly on – it pauses immediately for an extended flashback to a happy summer in the life of another character, the man most immediately threatened by the grand plot. Later, when the hero has a chance to capture the threat, he lets him go, only for the threat to reverse the danger on those above him, and on himself.

When the hero – Major Bennett Marco (Frank Sinatra) – is left to grapple with everything that happened, it plays as a less humorous version of the final scene in the Coen Brothers’ Burn After Reading. “What did we learn?” “I don’t know, sir.” “I don’t fuckin’ know either. I guess we learned not to do it again.” Director John Frankenheimer, screenwriter George Axelrod, and novelist Richard Condon were way ahead of the New Hollywood gang in recognizing the limited capacity of one man to change the course of anything. They felt the larger forces out there, dictating our lives. Even in the relatively optimistic period of Kennedy’s presidency, something was amiss in the government. Finding it would be challenging. Stopping it, impossible. Understanding it…unimaginable. 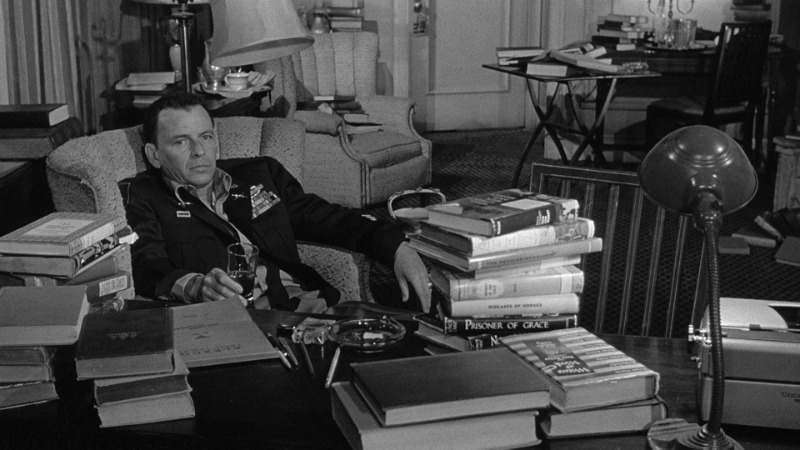 What’s so exceptional about the film is how it takes surprisingly shaggy material and turns it into a compelling thriller. Frankenheimer’s suspense is not built around impossible scenarios, but on feeling one is up against the impossible. This is why his Seven Days in May doesn’t quite work. The obstacle is formidable, but the challenge of overcoming it is not. Conversely, Seconds is a masterpiece because the obstacle is all too ordinary, but defeating it is futile.

The Manchurian Candidate falls somewhat in between the two. The villainous scheme is so decentralized that neutralizing it is not an option. The offshoots within Marco’s reach – most prominently, fellow veteran Raymond Shaw (Laurence Harvey), brainwashed to be an assassin – can be contained, but only to a point. He has his own life to live after all. He may be under the spell of Communists, but he has his own pursuits and dreams. Among its more suspenseful elements, The Manchurian Candidate‘s central concern could be said to be the work-life balance. Marco himself is romancing a young woman (Janet Leigh) whom he meets on a train in the throes of his mental and emotional breakdown. Raymond has to contend with the return of a lost love (Leslie Parrish – as in Hitchcock, both men in this film are infatuated with blondes), and his increasingly domineering mother (Angela Lansbury) when he learns he might be a danger to everyone around him. Their mental trauma alone is an external means to explore post-traumatic stress disorder, known in the pre-Vietnam era as “shell shock.” 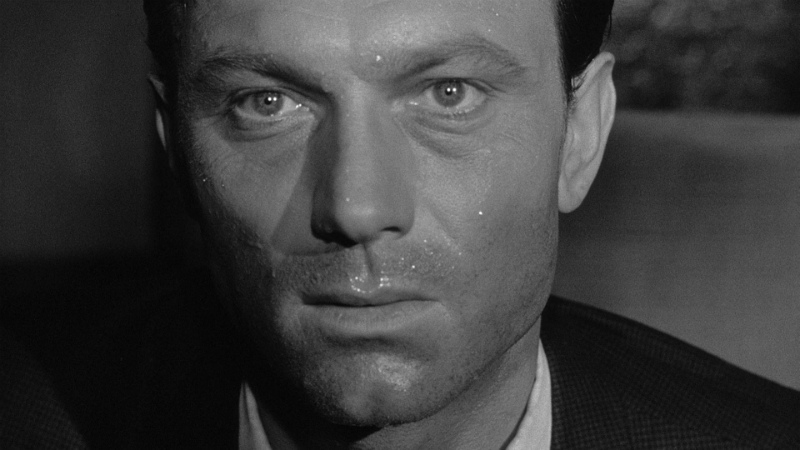 The film trades heavily on 1960s Cold War paranoia, but it anticipates the 1970s in depicting a collaboration between people within our government and enemy forces. And it depicts this as something more than circumstantial, but rather inevitable. Sinatra proves an ideal audience surrogate, sweating and squirming his way through every unsavory detail. He constantly assumes he has the upper hand, some grasp of what’s happening to him and his friends. He has no idea.

The nightmare is brought to Blu-ray in the UK on a new (Region B locked) Dual Format edition by Arrow Films. It’s just about as good a transfer you can imagine – grainy, crisp, displaying excellent depth and contrast (this is a picture of grays, as one might expect), and with just enough dirt, specks, and minor fluctuations to keep things nice and organic.

The supplements are numerous, but the best stuff is saved for the booklet. Frankenheimer’s commentary track, ported over from an MGM DVD years ago, provides a lot of good anecdotes about the production and distribution of the film – including a very amusing story of a gigantic theater in Greece that never showed the fourth reel of any film – but has a lot of long gaps. Arrow also ports over old interviews with Angela Lansbury, William Friedkin, and, in a group, Frankenheimer, Sinatra, and Axelrod. None are especially revelatory; Friedkin’s is perhaps the best, as it offers some formal analysis for why the film is so good, while the others tend to just talk about what an incredible experience it was. Arrow has also been on a kick of presenting episodes of The Directors TV specials (they also included one on Mann with their Thief release), and, while it’s cool to see interviews with so many of Frankenheimer’s collaborators and admirers, it too often turns purely towards the fawning to get anything really substantial. The contributions of the directors themselves tend to be the best part of these, and so it is with Frankenheimer here, who has an amusing sense of bewilderment that he even landed in the career he did. 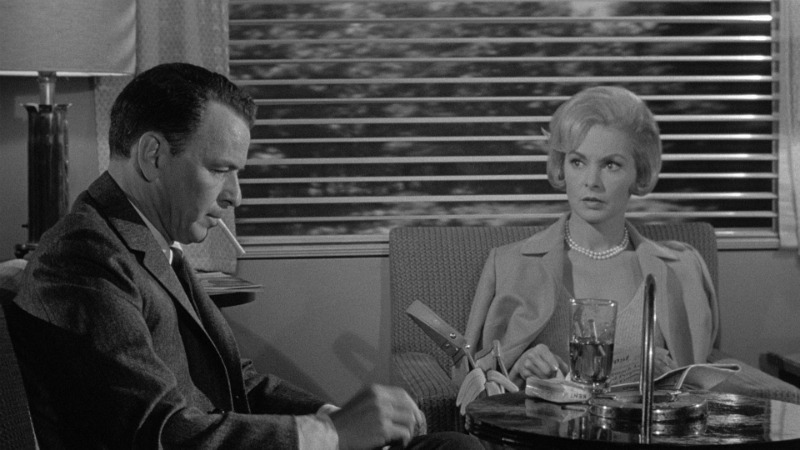 But, as noted, the booklet is where things really get interesting, with a pair of essays by cultural scholar Peter Knight and film scholar/hypnotherapist Neil Sanders on the culture of brainwashing, assassination, and Communism in which the film emerged, and how it affected the reception and discussion of those topics in the decades to come. This is a very admirable, gutsy way to approach the booklet material, and my hats are off to Arrow for taking this route. For those more cinematically minded, they’ve also included excerpts from contemporary, mostly admiring, reviews, which compare Frankenheimer to everyone from Hitchcock and Lang (more expected) to Resnais (less so, but not inappropriate). They end on the most amusing, and perhaps most pertinent, of the bunch, from Daily Express, which says simply, “I liked it in a confused sort of way but when it was over I must confess I couldn’t really see the point.”

This is all wrapped up in a characteristically expert design scheme by Arrow, which offers reversible cover art – you get to choose your shelf’s aesthetic! Always a nice touch. The discs themselves come in a tray system; the case itself is about as wide as a Criterion case. It’s quite a handsome package.

I’ll confess that I wasn’t too big on The Manchurian Candidate when I saw it some years back at the Brattle Theatre in Cambridge. I still think it’s not up there with Frankenheimer’s best, but the nightmarish tone it masterfully establishes is carried so well to such exciting heights that I can’t believe I wasn’t wrapped up in it then. I’m glad Arrow Films’ new release provided a chance to revisit it, and gain some fine perspective along the way.