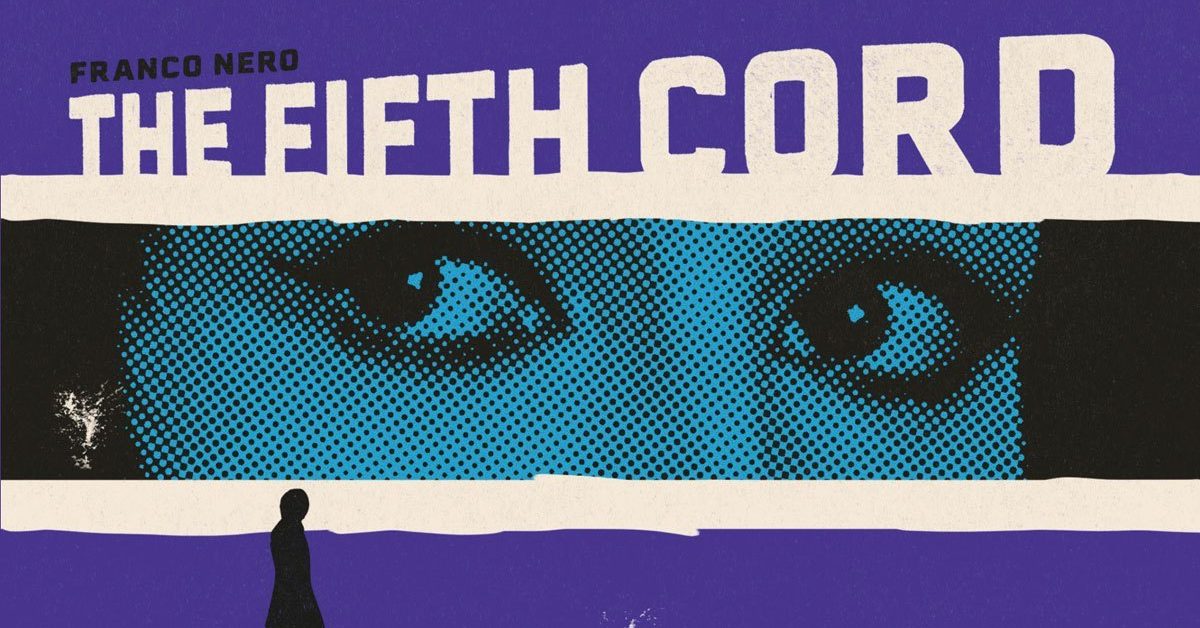 In his commentary track for this release, film critic Travis Crawford cautions himself against making any sort of superlatives in saying that Luigi Bazzoni’s The Fifth Cord is one of the best giallo films not made by the genre’s most eminent auteurs – your Mario Bavas and Sergio Martinos and Lucio Fulcis and such. But have the benefit of fewer compunctions and less experience with the genre than Crawford, so I can just flat-out say that this is easily one of the five or so best giallo films I’ve seen – ceaselessly tense, beautifully shot, lurid but not (too) exploitative, and patient enough to make the kills really count, it is that rare kind of film in which the genre elements seem to flow naturally from its creators, rather than feeling beholden to formula or template. It has everything you’d want, and each horrid stroke is earned.

We’re introduced to the major players at a party they all just happen to be attending (how generous of them). Shortly upon leaving it, one of them is brutally attacked, left nearly for dead and with serious injuries. Alcoholic journalist Andrea Bild (Franco Nero) is assigned to cover the beat, but before long, another victim surfaces, and all signs point to the two being connected. Then a third…then a fourth…and the connections form a tighter and tighter circle around Bild himself!

So sure, when I summarize it like that, it all seems pretty routine Italian mystery stuff. But from its opening moments – a fisheye lens roaming the party as the recorded voice of the murderer lays out his plans to kill and kill again – to the elegant way a more detached camera views the party, the way cinematographer Vittorio Storaro turns every space into something strange and otherworldly places the film into a realm all its own. Storaro was fresh off practically defining the craft the year before with The Conformist, one of the most beautiful films ever made, and shows no signs of feeling he’s “slumming it” here. Rather, the genre trappings seem to free him to craft either an immaculate image or a scummy one. For all the modern giallo “homages” we get these days, that mix is the element they always miss – the film must feel at once elegant and filthy.

And filthy it gets. Besides the usual exploitation of women’s bodies, there is a terrifying chase involving a young boy that is excruciatingly tense, accentuated by the patience Bazzoni displays, letting each scare creep toward the audience until we can’t bear it anymore. It also gives Storaro some different notes to play, as it is anything but graceful, but he still finds beauty in the handheld terror.

All of this looks extremely good on Arrow’s new 2K transfer, which has become characteristic for the distributor. Especially these giallo films have hit a fairly uniform stride – warm, rich skin tones, black levels that don’t swallow detail, robust grain structure that crafts a dense, naturalistic image, and colors that are richly saturated without blowing out. Damage is minimal, if even present at all. The specific quality of the images will vary, but it feels in keeping with the tools used to make it at the time, which necessarily will result in some shots looking softer or possessing less fine detail. The Fifth Cord is more of what I’ve come to expect and love about Arrow, which pours this terrific effort into these films that few have heard of and gives them a wonderful platform.

I’m a little less enthused overall about the supplements. Travis Crawford’s commentary is clearly well-researched, but too often in his track he’ll get distracted by something happening onscreen, have to double back on a point he was making, then only half-make it while also saying he’ll loop back to something else later, and kind of half-make that point too. The result feels pretty disorganized and doesn’t convey nearly the breadth of research he clearly did.

Racael Nisbet’s visual essay is much better, getting into the visual tropes of the film and especially how it functions as an extension of the common 60s-Italian-movie theme of modernity. She explores the way architecture is depicted in the film as sharing a commonality with Antonioni’s work. The interview with critic Michael Mackenzie is also okay; a bit of a fan-appreciation more than a critical assessment. Admittedly I got a little distracted looking at his Blu-ray shelf and finding it either too-perfectly-curated or the result of someone with extremely predictable taste.

The best supplement is definitely the interview with editor Eugenio Alabiso, who hasn’t one collaborator on this film whom he doesn’t completely adore. He spends the bulk of the time simply going on and on about how much he loves the film and everyone who worked on it, but he’s incredibly charming and I never once got sick of it. There’s also an interview with Nero, who remains extremely cool, if a sort of boiler-plate interviewee. plus an assortment of deleted “scenes” that are more like deleted shots, plus two trailers.

The supplements are a little hit-and-miss, but the film is extraordinary. Probably not worth Arrow’s full price, but absolutely worth adding to your list for their next sale.