It’d be easy to view Maurice Pialat’s 1991 biopic as a warts-and-all take on the famous painter. Indeed, he’s portrayed as womanizing, unreliable, a bit of a tyrant to his family, and constantly on the brink of suicide. Painting, however, proves his singular respite, the one activity that frees him from familiar torments and tremendous personal defects. In this way, Pialat’s vision of Vincent Van Gogh (played magnificently by Jacques Dutronc) actually emboldens his work, showing how much he fought through to produce works of such singular, quiet contemplation. Whatever that means for your opinion of the man, the film leaves undecided.

Pialat’s 158-minute running time gives him plenty of space to ruminate, but he largely ignores the highlights of Van Gogh’s life and career. The film takes place after the whole ear thing (which is only referenced once), excludes specific reference to his masterpieces, and in fact shows very few of his paintings at all. What remains is a lot of process – lugging equipment, setting things up, close-ups of brush strokes on abstracted canvases, taking commissions, finding inspiration, abandoning projects, stacking completed canvases, discussing possible points of exhibition – which is, on the whole, a great deal more cinematic than watching someone paint. 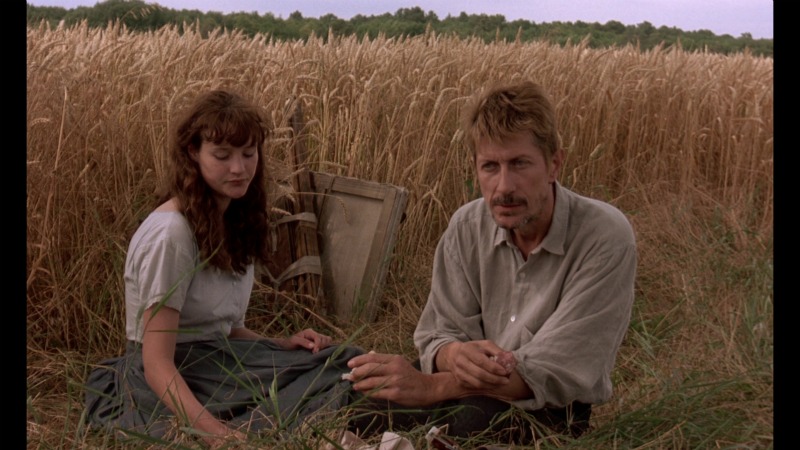 Dutronc is marvelous, giving a whole new perspective to the idea of a “lived in” performance, and reshaping the very film around him. It’s not the work of ego, as such (though, I suppose, who am I to say), but of a man who’s given himself over entirely to the purposes of the project, free from anyone’s – including his own – designs for it. In the booklet, it’s mentioned that Dutronc would often improvise, but not in the usual way of expounding on the text at hand. Instead, he would lift dialogue from other sections of the screenplay and repurpose that here. When they say you have to know the rules in order to break them, the result they speak of is Dutronc’s, who internalized the intent for the film so thoroughly that his instincts would inevitably guide him toward the best result.

As much as we are inclined to despise Vincent for his actions, Pialat is more than happy to throw in a great deal of levity and buoyancy. Even as the picture drifts more and more towards its unavoidably grim finale, he takes us to the most joyous, celebratory brothel you’re like to find this side of Fellini. It’s an odd passage, one that Pialat notes came out much more positively than he intended (the squalor of the place is still communicated, but it’s hard to spend so much time with people dancing and not end up feeling pretty good), but is intrinsically linked to the central romance, which, by this point, has more than started to peter out, and for all the sex and liquor that surrounds our characters, Pialat absolutely nails the crushing feeling that accompanies a romance on its way out. There’s more than enough room for heartbreak anywhere. 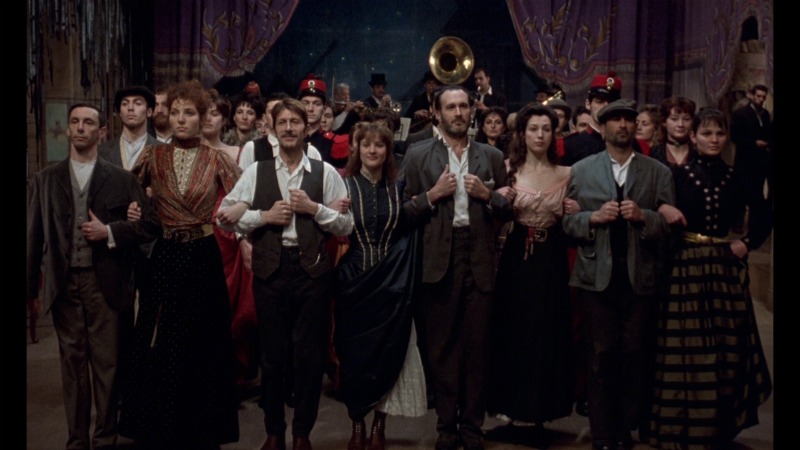 Masters of Cinema brings this heartbreak to a gorgeous (Region-B locked) new Blu-ray edition. The transfer retains a film filmic look, lightly grained and tremendously robust. There’s a real depth and tactility to the image that perfectly represents not only the original film elements, but Pialat’s subject as well – painting, as we are reminded throughout the film, is an inherently physical process, and as satisfying as it can be to browse scans of paintings online, there’s nothing like coming into contact with the thing itself. Film is very much the same, but MoC goes a long way towards merging the value of the original with the new way of viewing.

The supplements are plentiful and valuable, starting with a short documentary Pialat made on Van Gogh in 1965. It works better as a supplement than on its own, and shows just how fascinated Pialat was for so long with his subject. Rounding that out is an hour’s worth of interviews from 1991 (a 10-minute piece) and 1992 (a full 50 minutes), and then deepening that even further are interviews with Dutronc, Bernard Le Coq (who play’s Vincent’s brother and dealer, Théo), director of photography Emmanuel Machuel, and editor Yann Dedet, all of whom have great perspectives and insights into the collaborative process. The booklet, as usual, expounds on this as well, bringing in the thoughts of critic Sabrina Marques, Jean-Luc Godard (whose letter praising Pialat is included), and more from Pialat himself (never a man shy about his accomplishments), who speaks especially on his reputation of running over time and over budget.

This was actually my introduction to Pialat, and it’s made me immensely curious about the rest. His rendering of Van Gogh is neither strictly realist nor exceptionally dramatized, but thoroughly invested and full of the emotion of life. MoC’s new Blu-ray is really tremendous, offering a wide array of supplements to complement the filmmaker’s wonderful accomplishment. Highly recommended.