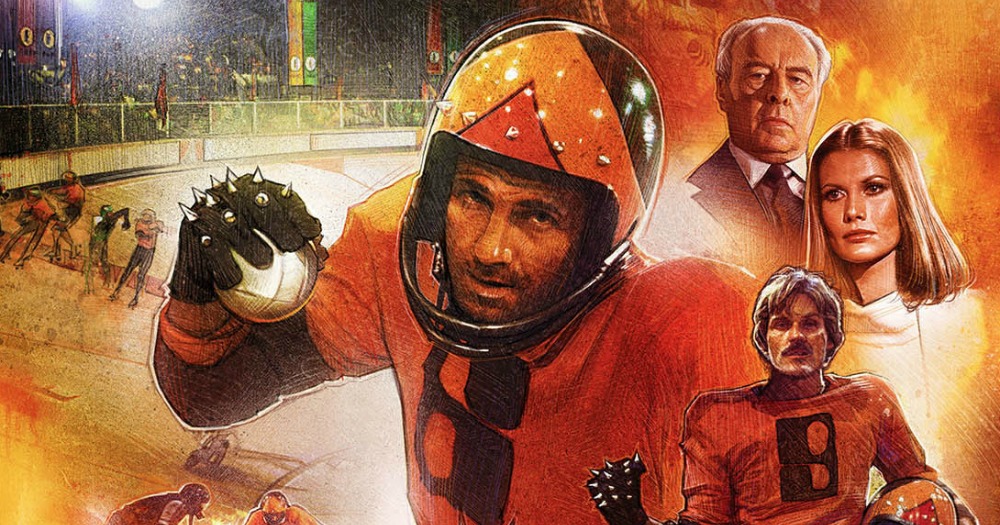 As we all know from inherited wisdom, Star Wars ruined the movies forever. Without it, we’d be getting movies like Nashville once a week, twice a week in December, and they’d all be huge hits and we wouldn’t be stuck with a bunch of CGI-infested dumping grounds for action figures and superheroes. I’m exaggerating a bit, as the general cinephile community has come to recognize some fallacies in this train of thought. Namely, that it overlooks how Star Wars itself was very much in the New Hollywood mold – an outsider director convinces a studio to finance his original vision, even though nobody thought it would make any money – and that maybe the public was just hungry for this sort of thing and Star Wars happened to come along at the right time. It may be more pertinent, however, to see all the ways that mass-appeal science fiction movies were being made right alongside your string of Altmans, Penns, and Coppolas.

For example, Rollerball. Norman Jewison’s 1975 film depicts a lightly-futuristic world in which corporations have replaced government, and the one thing they give the people as entertainment is this sport called rollerball (rollerball may also be used to fight wars; the film’s tagline and its content are somewhat at odds). Its star player, Jonathan E. (James Caan), is getting a little too big for his britches, so the top brass at The Corporation ask him to retire. The problem is, Jonathan loves rollerball. Loves it. It isn’t out of any special rebellion that he refuses; he just senses there’s something wrong with them telling him what to do. So he keeps playing. And The Corporation keeps changing the rules, making the game more and more violent in the hopes that he will die within it. You’d think that an entity as powerful as The Corporation would have a cleaner method of disposing of people, but then, where’d be the fun?

The film opens with workmen preparing the arena for the game, an important polemic device – though the remainder of the running time is solely focused on Jonathan, who lives in the upper echelon of this society, giving us this ground-view perspective on it all keeps “the common man” at the fore of everything that happens. If this is what The Corporation does to someone who brings them as much business and acclaim as Jonathan, how must the workers be treated? 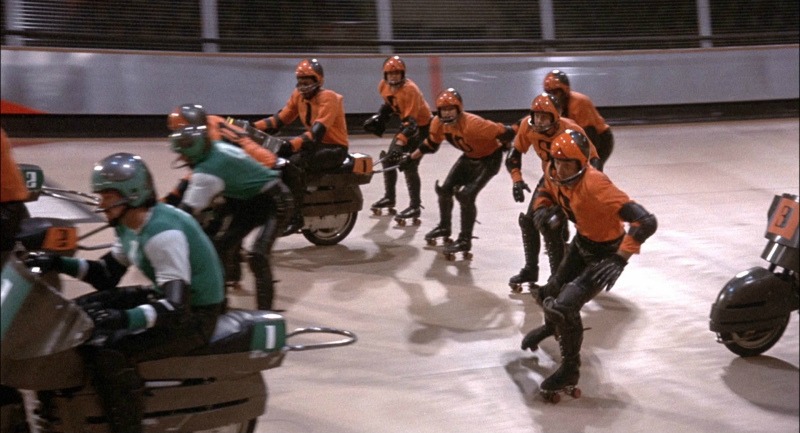 The games themselves are loads of fun. This is reportedly the first film to credit all of its stuntmen, and with good reason – they’re rollerskating (the -blading variety hadn’t yet been developed) around a track at a pretty decent clip alongside motorcycles (there are motorcycles in rollerball), taking rather spectacular falls, and it’s all far more outlandish than you typically get in a film, then or now. The trouble is that the scenes in between have a level of ponderous patience that this extraordinarily simple narrative does not accommodate. The aesthetics and emotions of the film are just too stripped-down, too spare to keep the engine revving. Caan can hold the screen with the best of them, but he can’t keep this thing afloat.

But if there’s one thing I’ve discovered in watching and researching this film, it’s that there are a lot of people who are very fond of Rollerball, and for them, I really cannot recommend Arrow’s new (Region B) release highly enough. First of all, you get another ace transfer that’s sharp and very attractive without feeling like it’s trying to turn a 1975 film into a 2011 film. Grain is nicely textured, colors are rich, and contrast is fine as far as that sort of thing goes (it’s not a film that relies heavily on darkness). Screencaps come courtesy of DVD Beaver. 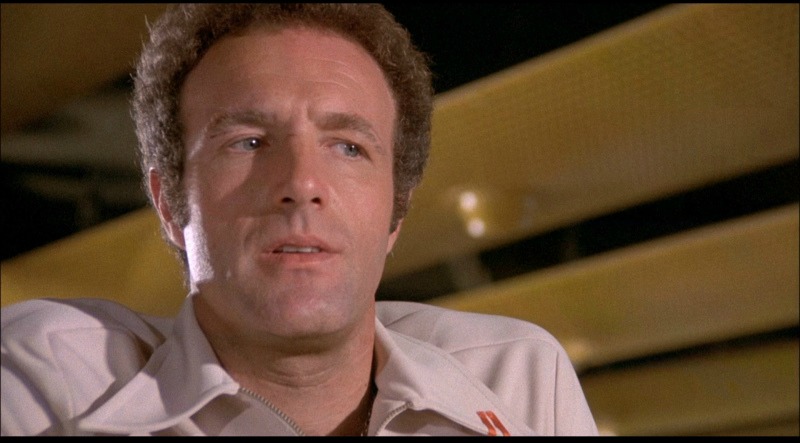 On the supplemental side, you’re looking at hours of content. Two commentary tracks, one by Jewison, the other by screenwriter/novelist William Harrison, on whose short story the film is based. Harrison’s has more pauses in it, but both are quite worthwhile, complementing each other nicely, as each has quite different ways of appreciating the material. Arrow then provides two different making-of featurettes, one an EPK from the time of release (a good deal more informative than the modern EPK, let me tell you), and one a retrospective documentary that probably accompanied the film’s studio DVD release, judging by the quality of the image and age of the participants. Both are made fairly redundant by the commentaries, though.

Where the release really excels is with a series of spotlight featurettes on the production team – one with unit manager Dieter Meyer (not often a unit manager gets featured like this!), one with stuntman Craig R. Baxley, and one with Caan himself, whose enthusiasm and passion for the film are really exciting. Baxley, too, praises Jewison and the whole production team, and isn’t shy about calling out modern productions for their comparative timidity. These supplements, and the commentaries, made me genuinely appreciate the film a bit more.

I’m still not much for the film overall, but this is quite the package Arrow has put together, and I can easily and heartily recommend it to any fans of the film.