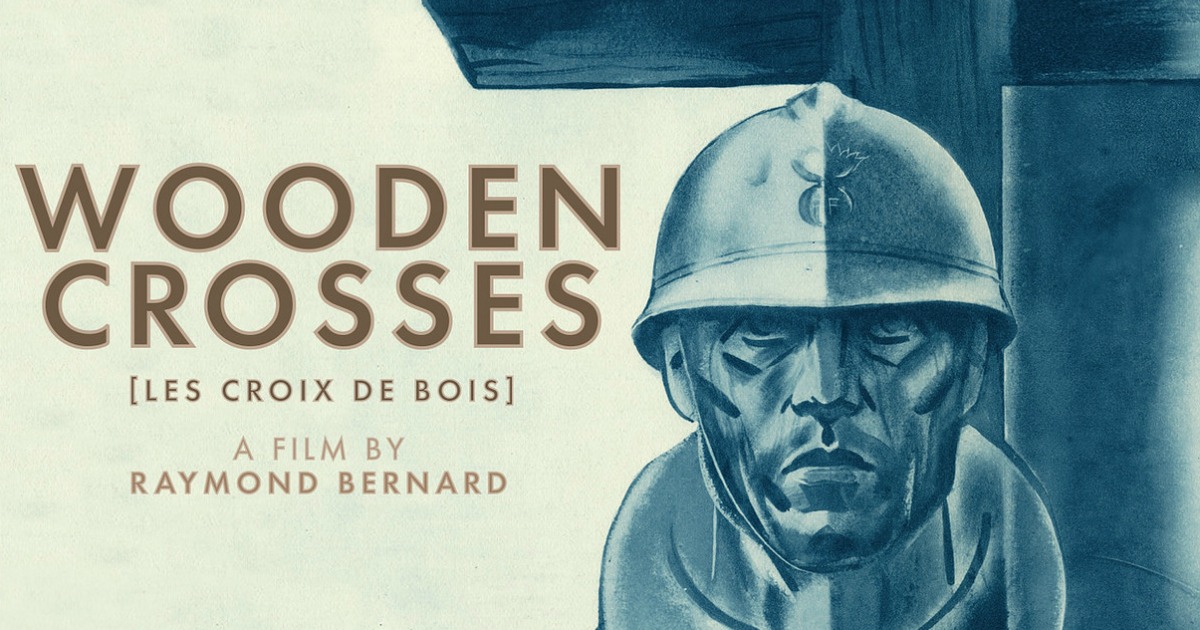 The political agenda of Wooden Crosses is immediately established from the start – a shot of rows of soldiers, standing proudly at attention, ready to receive orders and march into battle during World War I, dissolves to the image of a graveyard, one cross aligned precisely with the spot where each soldier once stood. These men are marching to their graves. But the story of Wooden Crosses is found in reconsidering its opening images alongside those that close it. There, we see a man die in the battlefield, hoping to hold onto life until them medics can reach him. Images of his life dance before our eyes, but these aren’t traditional end-of-the-film flashbacks. We’ve never seen these scenes or people before; every moment we’ve spent with this character has been but a glimpse into a larger, fuller life. Each cross is a man, each man is a universe, and this war is tearing all men from theirs.

The men are plain enough – bakers, farmers, shop keepers. Our protagonist is a student of law. None are prepared for what awaits them. They bond easily enough, as people of a certain stature, in certain times and places, will. They’re united by their loose pride in their nation and their burning desire to be anywhere else. The idea of “home” is always at the margins; in the rush when the mail arrives, in short comments. Never the main topic. Dwelling on it becomes too painful, especially as more and more men return from leave, reporting a world passing them by, half-forgetting their absence or purpose. 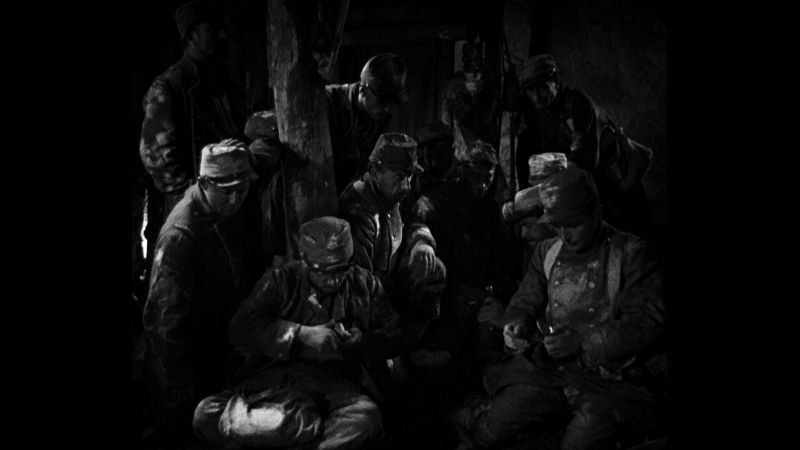 Meanwhile, they march towards increasingly-impossible campaigns, surrounded by shelling, gunfire, airplanes, and cannons. The aural onslaught is unbearable. Director Raymond Bernard layers the battle scenes with more sounds than the common man can identify, each one signifying death. The explosions go off so close to the actors, I genuinely feared for their safety. There are times when it seems like the whole world is coming apart around them. The men press on, as they have little other recourse; it’s dangerous ahead, but it’s just as deadly behind. Rarely is the sheer nonsense of war committed to screen. Dramatic structure requires certain deaths be held for certain moments. In Wooden Crosses, any man could die at any time, for no reason at all, having accomplished nothing to aid the effort. He will simply become another cross. As one such man dies, he curses his wife, who is cheating on him back home while his whole life falls away. He final words are not of longing or love, but of sheer contempt; we don’t get to decide our mood upon the moment of our death.

Bernard (who also adapted Roland Dorgelès’ novel, itself informed by the author’s service in World War I, alongside André Lang) presents these scenarios very straightforwardly, limiting the melodrama, but accentuating the feeling. When the law student, new to the unit, is on his first long march, a fellow soldier notices him awkwardly adjusting his rifle to find a way to make the load more bearable. “Here, let me carry it,” the other soldier says. “One more gun won’t make a difference.” Bernard watches the first man hand over his weapon, then observes them simply walking side by side. This quiet gesture is a bonding moment that nobody acknowledges, but everybody recognizes. 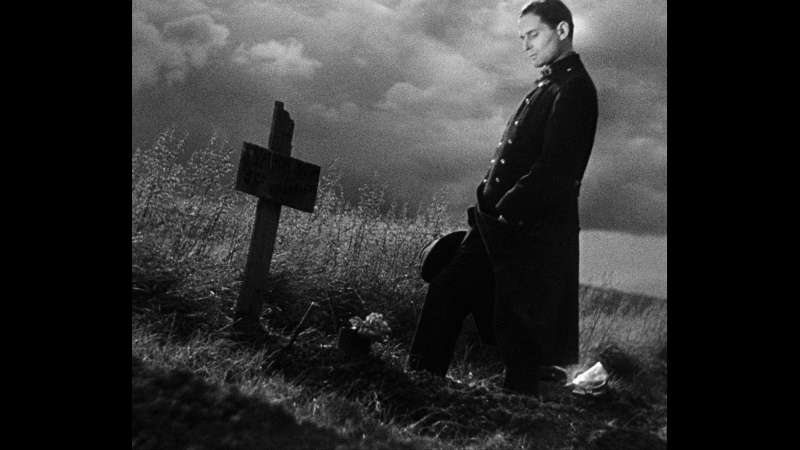 Masters of Cinema’s new (Region B locked) dual-format edition is anything but straightforward and simple. Working with a new 4k restoration by Pathé, the Blu-ray presentation is outstanding. Contrast is notably high, but grain resolution is superb, as is depth and available detail. The disc includes a supplement on the restoration process, which involved combining several distinct elements, but the final product moves completely as one. Minor fluctuations persist, but they help ground the movie in a more “filmic” look. Density, especially, is very strong. This is an image that feels thick and weathered, yet I don’t recall a trace of damage in it; it feels resilient, powerful, and permanent. My highest compliments to all involved.

I don’t usually comment on the audio, as there’s typically only so much to say, but it really has to be noted on this disc how exceptional it is. The sound design on the film itself is unusually ambitious for 1932, layering dialogue, many different types of weaponry, and some non-diegetic music to create a soundscape unlike any I’ve heard from the era. I had the speakers cranked pretty high, and the effect was overwhelming. There’s a bit of hiss left over in the soundtrack, and some of the louder explosions crackle a bit, but the total effect is incredibly powerful and haunting. The slight imperfections inherited from the source actually make the war more terrifying, as the recording technology cannot contain their might. 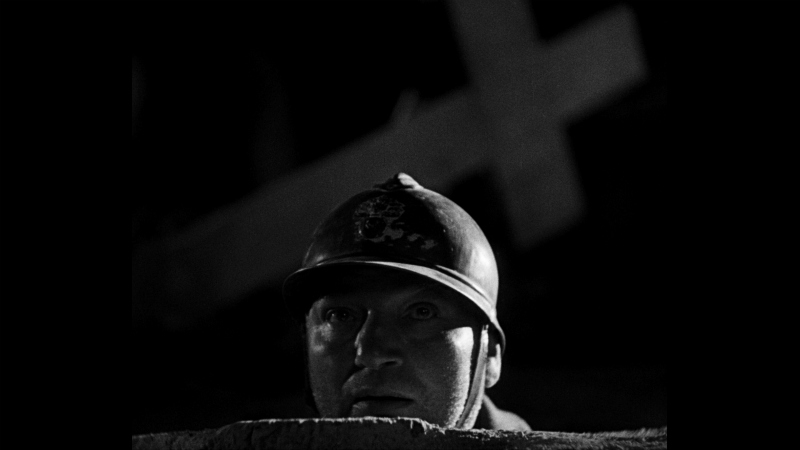 All of the supplements are pulled from the edition Pathé put out in France, but MoC provides English subtitles where Pathé did not. The aforementioned piece on the restoration is surprisingly in-depth; usually these pieces last about 3-4 minutes, half of which is nothing but before/after comparisons. This one runs 24 minutes, and goes into fairly technical detail about the challenge the film presented, and their ethos in tackling it. Film historians Marc Ferro and Laurent Veray are given a half-hour to discuss the film, and while I found their analysis to mostly be a little obvious, it’s not devoid of value. There’s a very cool 12-minute piece on the film’s sound design, a great 11-minute excerpt from an interview with Bernard, a somewhat superficial 5-minute excerpt from an interview with Dorgeles, newsreels, and a very welcome look at the work of French poster artist Adrien Barrere, who provided sketches for Pathé after spending a good deal of the War sketching soldiers and battlefields. Finally, there’s a great surprise in a 15-minute documentary about Andre Schnellbach, who served in the same regiment as Dorgeles, and who took dozens – if not hundreds – of photographs during the war, and wrote over a thousand letters about his experiences. No unsavory detail is spared, and this is a captivating, horrifying look at what he, Dorgeles, and thousands others experienced.

MoC also provides a 40-page booklet, featuring an essay by Emmanuel Burdeau, an excerpt from Bernard’s autobiography, an interview with Veray, a look at the adaptations of Dorgeles’ novel, and further detail on the restoration.

This all provides a very engaging, multifaceted look at a truly great film, among the very best war films I’ve ever seen. I cannot recommend the film highly enough, and MoC have provided the ideal way for English speakers to experience it.

Written By
Scott Nye
More from Scott Nye
Murnau's final German film is the culmination of his accomplishments to that...
Read More