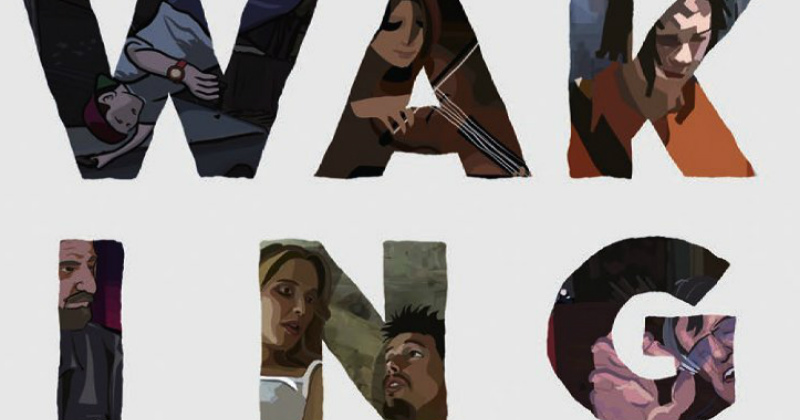 Sure, Waking Life is in some ways Linklater’s metaphysical remake of Slacker, exploding the Gen-X barriers thrown up around that landmark work and bringing it closer to a transcendent plane that he’s trying trying trying to reach, especially in this era, but never quite grasping. That’s what appeals to a lot of us about Linklater’s work, that it’s never quite there. His curiosity has to be bound by the physical demands of cinema. But this, this weird film, shot-on-digital and animated by rotoscope on computers, comes closest. Those formats mean it never really “existed” in any physical space. Produced at the dawn of the 21st century, it’s the perfect summation of a moment in time when thought and curiosity might be enough to carry civilization, when restless unease was the result of an economic boom and not certain doom, when the popular cinema could still be a little wily, a little slippery, and a good deal weird. It premiered at Sundance in 2001, eight months before September 11th would greatly diminish whatever public appetite for peaceful pondering there was. All our larger debates came back to war, aggression, eventually the economy, and some subset of what constitutes “freedom”.

Or maybe that’s just my own bullshit that comes from having come of age in the 21st century, my own dream of a society that never really existed, that wasn’t so aware of the innumerable social injustices that rightly demand our attention away from questions like “does dream time correspond to the moment before our deaths, and if so, would it then be possible to truly relive your life in the span of a few seconds?” or “is it really free will if there are all these (quantum) physical laws governing our lives?” You know, just the important stuff. But while on a certain level this sort of public discourse is enviable, the (total straw-man) argument that this sort of thinking pointedly ignores more immediate concerns is completely valid, and there’s a certain naiveté that informs even the base desire to want to make a movie like this, or see a movie like this, or have these conversations at all. There are more important subjects to bring to light, perhaps.

But then I think, well, it’s all just a conversation anyway, and though the modern culture insists that the very act of having a conversation is tantamount to actually doing something, it’s all very thorny territory. But maybe getting at spiritual or existential concerns can lead to a more enlightened view in considering social injustice, and so it’s all the same conversation, ultimately. And hey, there will always be doubts as to the practical legitimacy about philosophy; as The Beatles say, it’s nothing to get hung about.

Waking Life is about a dream, and about thought, and about the loose connections between those things. By presenting it all as animation, Linklater is able to slip between and through them, suggesting any suggestion therein is tenuous at best, and open to a different avenue of consideration along the line. There aren’t much in the way of performances, but those present assert themselves in powerful ways. Some are actors (chiefly Wally Wiggins, who guides us and himself, or is guided; but also Ethan Hawke, Julie Delpy, Adam Goldberg, Timothy Levitch, and Nicky Katt), some are scholars and professors (Eamonn Healy, Louis H. Mackey, David Sosa, and Robert C. Solomon), a couple directors (Steven Soderbergh, Caveh Zahedi), plus an organ builder and a conspiracy theorist, for good measure. Theories relating to chemistry, the government, love, aging, cinema, and much more are given their space. It all connects, and it all kind of makes sense, the way – yes, dreams – but also just common thought only kind of makes sense. Waking Life feels like one of those extended conversations you have with yourself that are difficult to precisely summarize or present to others.

Arrow makes that conversation a little more legible with a vast array of supplements. There are two commentary tracks – one by Linklater, Wiggins, art director Bob Sabiston, and producer Tommy Pallotta; the other with the members of the animation team. Naturally, the former sticks more to the film’s development, conception, and themes, while the animators have a lot of fun trying to explain the instincts that drove them. Both tracks do a great job of illuminating corners of this wacky little film. Sabiston has also provided Arrow with a half-dozen short films of his, and a fun little animation tutorial. It’s so easy to watch animated films and see only fluid motion; these sort of features highlight not only how much work goes into them, but how handmade (even on a computer) and personally-crafted they are. Arrow provides a further peek behind the curtain with deleted scenes, and, most intriguingly, some pre-animation live action footage that became the basis for the film. While it obviously wouldn’t be the film it is (or perhaps even much of a film at all) without the animation to interpret it, this gives a great degree of insight into a unique acting process, one that allows for more outlandish performances to exist alongside nearly Bresson-levels of muted expression. And if that’s really not enough, Linklater made a trivia-filled subtitle track, which sometimes just becomes him guessing at what one of his subjects was trying to say during a particular section.

By the way, there’s not a whole lot to say about the transfer – as it was essentially a digital animated film, there’s little to worry about a company like Arrow keeping the thing intact. Colors look great, it’s plenty sharp, and it just looks pretty damn stellar.

Waking Life somehow didn’t make it into my summer of binging Linklater movies ten years ago, and I was glad to have the opportunity to finally watch it now. While I still like seeing the loose, casual performances he gets out of his actors in a live-action environment, this is a truly audacious, original conception for a film that is remarkably insightful about a whole host of turn-of-the-millennium concerns that are still vital today. The more immediate concerns in 2016 – war, poverty, health care, civil rights, to name a few – may dominate our thoughts, but I hope we still have space for the truly abstract and unknowable. This is the itch Waking Life scratches.