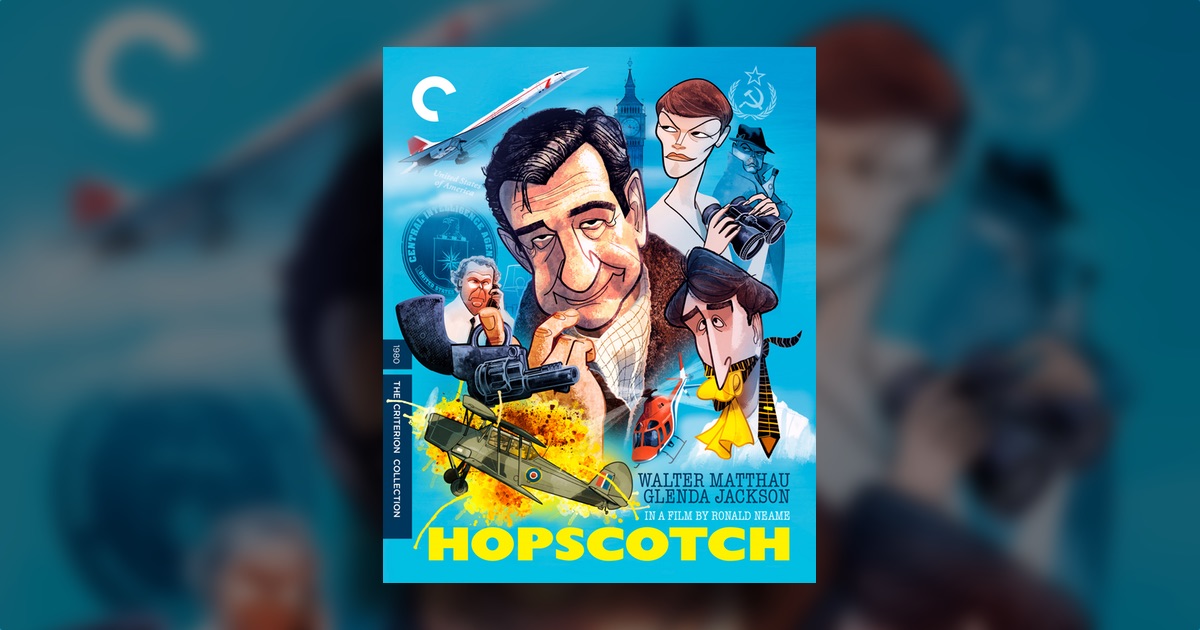 Hey, you might not be aware of this – and honestly, no worries if not, we’ve all got a lot going on – but Hopscotch is the greatest movie ever. This is an irrefutable fact, and I’m glad I was able to save you from all kinds of hand-wringing. If your hands are already getting pretty wrung, though, feel free to pop in Hopscotch just to check. I’ll wait.

Okay, so we’re all set then? I can come clean – in the pure, cleansing light of day, Hopscotch may not literally be the greatest movie ever made. But it feels that way every second whenever I watch it. Walter Matthau as a CIA agent outwitting the CIA and every other national intelligence agency? You couldn’t ask for a more pleasurable premise. Anytime you can get a protagonist the audience likes but doesn’t fully understand, you’re on the right track. Matthau made a career out of being eminently likable. He either reminds you of yourself, your pal, or your dad (“That’s always been my problem,” he quips in the film), or maybe just the versions you want those people to be. Add to that his loosely-sketched idea to write his memoirs and incite the CIA to chase him all around the world while he stays one step ahead of him basically by pure wit and instinct…the only possible problem with this movie is that it’s not secretly an ever-complicating 13-hour affair à la Out 1. We have every reason in the world to keep watching.

Oh, and on top of all that, there’s an immensely charming romance with Glenda Jackson, an actress who exudes confidence and whose doubt in Kendig’s ability to pull off this plot adds just a dash of tension. I mean, we ultimately know he’ll pull it off. How could he not? Just look at the guy. And look at his competition – Ned Beatty. Ned Beatty, as Myerson, introduced with a photo of himself and Richard Nixon. This is in 1980. For Myerson to still be displaying a picture of himself with Nixon shows he’s either totally out of touch with the national mood, or has no other photos worthy of boast. You couldn’t dream of a way to more swiftly show a more pathetic public official.

Also aiding the search for Matthau is Joe Cutter, played by Sam Waterston. Now, the makers of Hopscotch, however brilliant they clearly were, could not have known Waterston would become defined by his hugely popular role as dogged attorney Jack McCoy on Law & Order. But in going back to see the film now, that association doesn’t hurt. Unlike McCoy, though, Cutter plays strictly by the rules. He likes Kendig (this is how we know he’s smart), and would just as soon let him go, but he has his job to do, and figures the CIA will bring the old dog down sooner or later, so he might as well help make it as easy as possible. Waterston brings some real charm and swagger, never too bent out of shape but always on the go.

It’s a breezy, fun as hell film that Criterion presents in a breezy, fun as hell manner on their new Blu-ray edition. The transfer is solid, crisp and grainy and robust, density to every frame. I wonder if it might be a tad overexposed – the whites beaming in from windows take on that Janusz Kaminski vibe – but hey, I’ve never seen a print, so I can’t say for sure. Some of the older supplements that Criterion carried over from their 2002 DVD edition have clips from that transfer, and the whites look a little less extreme there, but not so much as to suggest a markedly different approach here. The transfer was carried out in 2K resolution.

On the supplemental side, Criterion ports over their short (20-ish minutes) video piece featuring interviews with director Ronald Neame and novelist/co-screenwriter Brian Garfield. Both have some great stories on how this film came together, particularly Neame, who, in the process of rejecting the movie a couple times, learned Matthau also tried to wriggle out of it by saying he wouldn’t do it unless Neame accepted it. Boy are we lucky they both got onboard. Criterion adds an excerpt of Matthau’s 1980 appearance on The Dick Cavett Show, which, of course, is a blast. All Dick Cavett shows are a blast. This is one of the universal rules governing life at this point. We also get a new essay by Glenn Kenny that’s as action-packed and witty as the film itself. The cover is a new cartoony collage by Jonas Bergstrand that’s quite fetching, but to be frank I still prefer the old one, which wasn’t as aggressive about the comedic angle while still being plenty playful.