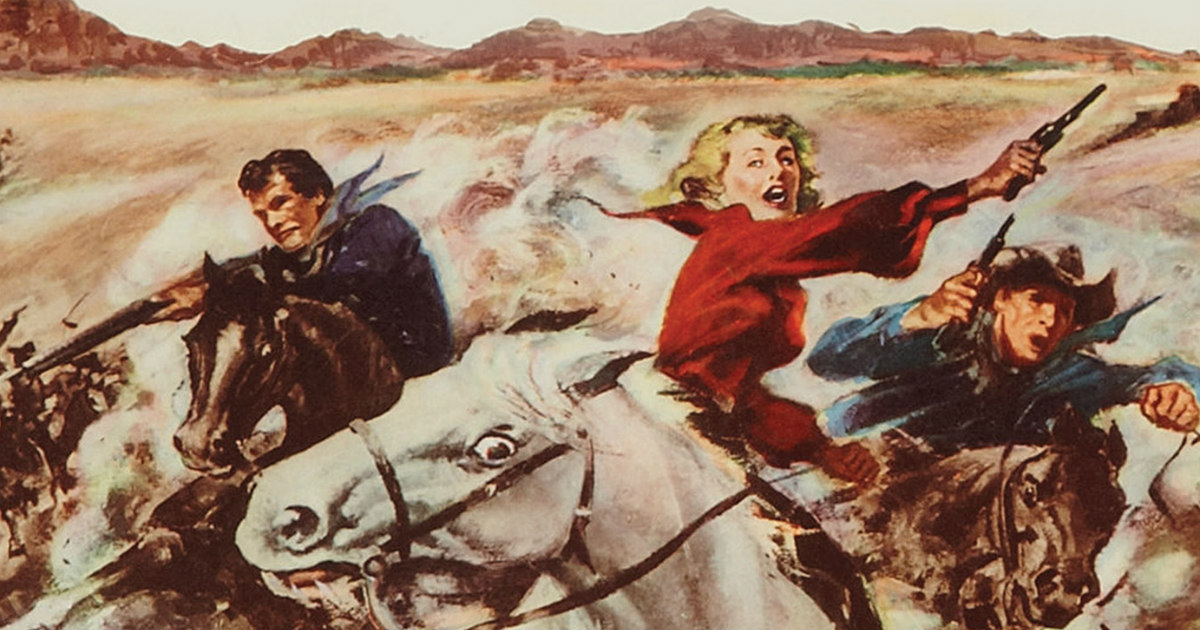 Well, I’m glad I’m not the only one who didn’t quite follow this one. In his 1957 review of the film for Cahiers du cinema (reprinted in the booklet accompanying this release), Jean-Luc Godard wrote that Forty Guns “is so rich in invention – despite an incomprehensible plot – and so bursting with daring conceptions that it reminds one of the extravagances of Abel Gance and Stroheim, or purely and simply of Murnau.”  For a movie featuring a half-dozen standoffs, at least as many deaths, two musical numbers, and an honest-to-God tornado, nothing much seems to happen in Forty Guns. The tone and tenor of the thing feels as relaxed as Rio Bravo. I’ve seen it twice now, and viewed a few scenes here and there beyond that, and I still can’t quite reconcile the whole. But Godard’s right – it’s a hell of a thing to see.

It starts right at the opening, as one might expect with a Fuller picture. Griff Bonnell (Barry Sullivan), along with his brothers Wes (Gene Barry) and Chico (Robert Dix), are riding across the plain in a coach when a horde of rampaging gunslingers barrel past them on horseback. Leading the charge is a woman we’ll know later as Jessica Drummond (Barbara Stanwyck). In the wide shots, they seem to flow across the desert like a river, or a snake (perfect for widescreen), each movement Jessica makes affecting the way the rest ride. In tight shots, they seem fiercer than the tornado that will damn near kill Jessica midway through the film. These sensations will carry over to other forms of behavior as well. Jessica is something between a gang leader and a gender-reversed harem master; neither imply a great deal of empathy for those she commands, but both demand servitude, compliance, and, when ordered, apocalyptic force. Those who can’t get along will move along.

There’s romance, and quite a lot of talk of guns, and eventually both, once Wes starts courting Louvenia Spanger (Eve Brent), a local gunsmith who knows her way around a barrel. Jessica eventually finds her softer side through a violent tornado and Griff’s mighty arms. They share a love scene in a barn as simple and sexy as they come, the camera descending from the rafters as the two come down from the high of their whirlwind. Stanwyck, by this point, had little to prove, but this cheapie western (shot in only ten days) gives her one of her most iconic roles, finally ascending to the place of command for which her most famous characters – in Baby Face, in Double Indemnity – seemed destined. She relishes it so much, commanding her screen time to such a degree that her spirit haunts her physical absences, it’s almost a shame she needed a softer side at all. Almost.

Masters of Cinema wasn’t quite the first company to get this to Blu-ray – a French company beat them by a few weeks – but for English-speaking consumers, it should prove the more attractive offer. Judging by available screenshots, the transfers seem to be of more or less equal virtue, and MoC certainly has them beat on the supplements. The video quality leaves a bit to be desired, I’ll admit. No source is mentioned for the transfer, but it has the hallmarks of a studio job – grain is wildly uneven, sometimes looking spot-on and adding beautiful texture, sometimes stripped entirely from the resultantly-waxy image. Contrast is way overdone to give it a “dynamic” appearance, in the process demolishing nearly all shadow detail. The tornado scene, a flurry of sand and twigs and all manner of debris, seems (thankfully) completely untouched, probably due to the labor involved in distinguishing the dirt flying around in the film from the dirt popping up on the film. It’s the only scene in the film to still carry this sort of damage, but it is also, not coincidentally, the richest and most authentic section of this transfer. Here, you can finally see some depth to the plain, and feel the density of the world. Screencaps come from DVD Beaver.

While the supplements may seem few and meager, I’m pleased to report they feel like neither. Sure, on the disc we only get a video piece with a French scholar (ported over from an old DVD release, I’d guess, judging from the quality) and an audio interview with Fuller, but what they doesn’t tell you is that the audio interview is, in fact, 80 minutes of him joyously interacting with an audience and – even better – is layered over the film as a separate audio track and a de facto commentary. While one would become overly strained trying to tie directly Fuller’s comments from 1969 with the underlying progression of the picture, the totality of listening to this in such a way gives one an appreciation and application for Fuller’s theories and experiences. Home video companies too often let audio interviews simply play over their menu screen, or maybe a succession of stills, but utilizing it as a commentary track is an immensely rewarding choice, one I hope MoC, and others, will continue.

The French scholar piece is also very good, if a little overly busy in the production. The booklet provides the aforementioned review by Godard, as well as an essay by Murielle Joudet and a very entertaining excerpt from Fuller’s acclaimed autobiography A Third Face: My Tale of Writing, Fighting, and Filmmaking. Best bit? “For Chrissakes, my gunman had to think about box-office receipts before he decided to pull the trigger!” Well, that or him mentioning the time he set his brother up on a blind date with Marilyn Monroe. All of that is packed into a dense 36 pages; again, MoC has made tremendous use of what may seem like a rather small array.

All that has turned this disc, with an only-decent transfer of not-my-favorite Sam Fuller film into something of a must-have, an outstanding exploration into Fuller’s working methods by way of one of his most expedited productions.