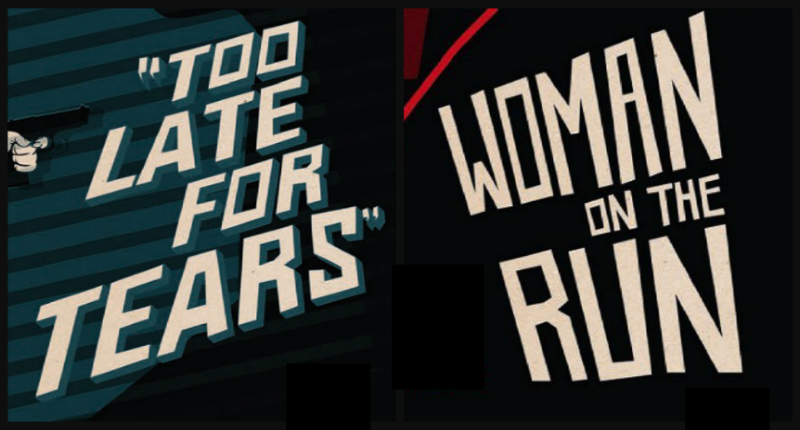 There are two major sides to the film noir coin, as I see it – the psychological and the practical. Now, the practical noir is fairly straightforward; maybe a detective has to solve a crime, or someone gets themselves in over their head with some scheme gone wrong. There’s a problem to be solved, and the protagonist either overcomes or becomes consumed by it. Double Indemnity, Where the Sidewalk Ends, Night and the City, The Killing, and The Maltese Falcon fit into this section rather well. The psychological noir uses genre tropes to investigate someone’s soul, usually stemming from their nearness to sin and death. Scarlet Street, Laura, Female on the Beach, The Chase, Sunset Boulevard, and Kiss Me Deadly fit the bill. Obviously films in each use elements of the other to shade the characters or move the story along, but the texture and flavor is notably distinct, and the value of each basically comes down to a matter of taste.

Two new releases from Arrow Films (sold separately), utilizing new restorations by the UCLA Film & Television Archive and the Film Noir Foundation, exemplify some of the better traits of both ends of the spectrum. First, the practical. In Byron Haskin’s Too Late for Tears (1949), Jane (Lizabeth Scott) and her husband Alan (Arthur Kennedy) come into a great deal of money in a very bad way, and struggle with the morality and practicality of holding onto it. The pressure really starts to bear down when a gangster (Dan Duryea) comes looking for it. But hubby doesn’t know he’s been coming around, and wifey is determined to keep that dough. What is it about the postwar era and untrustworthy dames?

Scott runs away with the film, even in the face of the reliably-magnetic Duryea, who made his living playing precisely this sort of two-bit hustler, big on talk but only willing to go so far with his threats. The scenes they share together are the film at its most electric. Whatever doubts one might have about their evolving scheme, the other is there to egg them along, if only as an extended dare. Haskin and screenwriter Roy Huggins (later a prolific TV writer) keep raising the stakes in small, believable increments until the pressure exerted on Jane becomes unbearable. Sort of a condensed Breaking Bad, we feel for her and quietly root for her success, but also recognize that she brought this upon herself and is making none of the right decisions once she loses control. 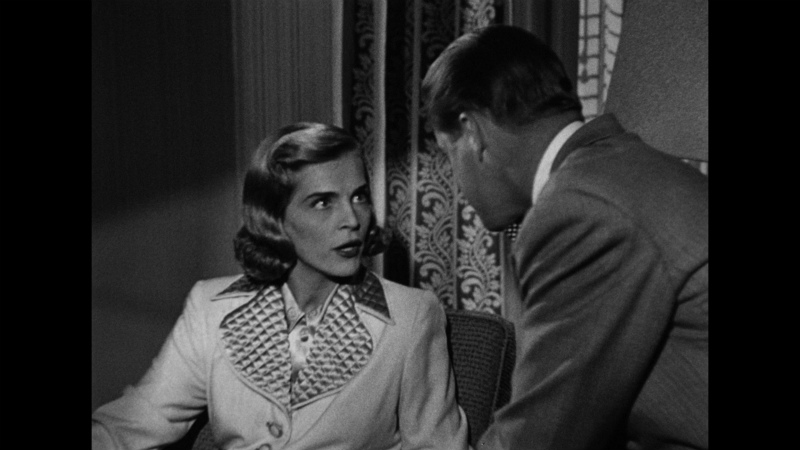 Haskin keeps things at a bit of a remove, however, especially as it goes along and starts to divorce us of Jane’s point-of-view, further centering the film around Alan’s sister Kathy (Kristine Miller) and a suspiciously nosy man who comes knocking (Don DeFore). We don’t really see the toll Jane’s transgressions take on her as the film puts her further and further into a safe, femme fatale remove that lets us enjoy her icy immorality without feeling the weight of those actions. It’s a legitimate enough avenue, and it sure makes for a fun picture, but it’s not what I really like about noir. It’s all the surface pleasures without the sting.

Norman Foster’s Woman on the Run (1950) is all sting, all psychology, and too hypnotic and wild in its visuals to worry too much that it doesn’t make a ton of sense. But our protagonists are not criminals. They’re just unhappy. Frank (Ross Elliott) is an innocent bystander on the run from the police after witnessing a mob man kill their star witness; they’d like Frank to step in and put the guy away, but he’s not wild about risking an acquittal and all the vengeance that would reign down on him as a result. His wife, Eleanor (Ann Sheridan) isn’t wild about Frank, or so she says. But when it comes to helping the cops or helping him, she stands by her man. Or runs after him, anyway.

The plotting of her hunt – particularly the scavenger hunt clues Frank leaves at various locations – is pretty spotty, and the mobster’s revenge scheme against Frank is certainly elaborate, but the film is so psychologically compelling that I had no trouble overlooking this stuff. As Eleanor hits up their favorite hot spots, the search becomes a trip through various stages of their romance, eventually ending up to what she identifies as the emotional pinnacle of their relationship. And maybe it’s just the melodramatic, romantic sucker in me, but this was damn affecting stuff. Sheridan is out-and-out great in the lead role, world-weary and men-weary and just bitter in a way female protagonists almost never are in the movies. This level of spite is usually reserved for a drunkard supporting role, a woman who’s lost in herself and in men and is completely unreliable. By shifting this type to the fore, though, Foster, Sheridan, and screenwriters Alan Campbell and Ross Hunter find so much depth and redemptive possibility in someone who’s essentially resigned herself to nothingness. 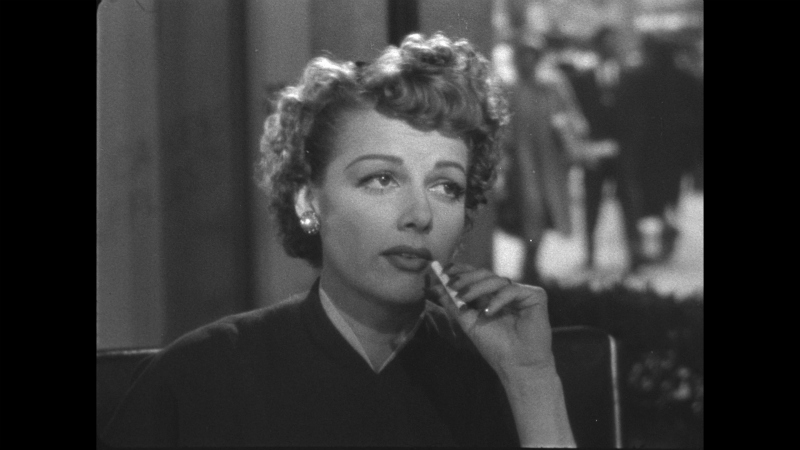 Hunter would spend the 1950s ascending into superproducer status at Universal, spinning success with Magnificent Obsession into a series of “women’s pictures” including All That Heaven Allows, There’s Always Tomorrow, Imitation of Life, and Pillow Talk – films that take women’s desires and lives seriously. I don’t want to overstate his contribution here; his main credit is for dialogue. But with such lines as “I’ve had just about enough of the all-knowing male,” well, the dialogue deserves its due, and suggests Hunter had a certain insight into the way women negotiate their place in society.

Workhorse Hal Mohr (who shot 119(!) films between 1912 and 1953, and built his own camera as a kid) provides expert cinematography that grows increasingly expressive as it moves towards the truly-audacious finale in which Eleanor’s emotional journey comes to a head while she’s trapped on a roller coaster, and Mohr takes every opportunity in that set-up to let her spiraling guilt collide with her spiraling ride. But this is really Sheridan’s film, to the core. She’s in every scene once she’s introduced, and she never gives you reason to want to look elsewhere, spinning endless exposition into gold and looking with absolute spite at anyone she doesn’t care for. And Eleanor doesn’t care for most people.

Some might prefer the more straightforward plotting and clean characterization in Too Late for Tears, but I’ll go with messy, unpredictable emotions any day. Luckily, we need not choose. Both releases from Arrow Films look lovely. The new restorations were scanned directly from their restored prints (they still have the reel change marks and everything), so this is a different sort of digital presentation than what we usually see. The Film Noir Foundation restores films photochemically, preferring to keep them on film rather than make digital files the default version (for more on this process and ethos, listen to Peter Labuza’s excellent interviews with FNF president Eddie Muller and UCLA Film & Television Archive Director Jan-Christopher Horak). Consequently, the best available versions for Arrow (and, in the States, Flicker Alley) to scan are the exhibition prints – as you’ll learn in the supplements on these discs, other elements are largely unavailable, and not in nearly as good condition. So, that having been said, there’s still a fair bit of damage in these prints, grain is quite heavy, and focus isn’t always perfect. But they are sharp, detailed, exhibit great depth and detail, and the shades of gray in these black-and-white films is superb. I saw the print in question of Too Late for Tears in March of 2015, and can say this transfer represents that restoration quite well. (screencaps courtesy of DVD Beaver)

The discs come fairly stacked with supplements – Muller and FNF treasurer Alan K. Rode provide commentary tracks on Woman on the Run and Too Late for Tears, respectively, and do a great job outlining the production history and style in each film. Rode trends more towards the historical approach, while Muller takes an analytical view that he supports with research, and I can’t imagine any viewer walking away from listening to either without a great deal more appreciation and affection for each film. These are further supported by documentaries analyzing the production and legacy of each film, and documentaries on the restoration of them. Woman on the Run also features a short piece on Noir City, the annual noir-centric festival that the Film Noir Foundation hosts in San Francisco and other cities across the country (I go to the one in Los Angeles every year, and it’s a blast).

I am reminded every year at Noir City just how mutable and fluid noir is as a loose “genre.” In the interview referenced above, Muller talks about how he sees the genre as encompassing any film where someone makes the wrong decision. The possibilities are really limitless from there. Too Late for Tears and Woman on the Run each offer a marginally different experience than the canonic noir titles might suggest, and Arrow has done very fine work in presenting them here.