Yasujiro Ozu is the kind of filmmaker, like Robert Altman in the 70s or Godard in the 60s, whose films achieve an individual greatness that is dwarfed only by their collective brilliance. One cannot imagine, in retrospect, Tokyo Story apart from Late Spring, nor Good Morning from Early Summer. The films exist in conversation with one another, adding depth and poignancy to earlier themes and characters by exploring similar terrain. Like Coppola’s The Godfather, Part II, which actively makes The Godfather a better picture even while achieving its own considerable ends, Ozu’s films embolden the strengths of his others while smoothing over their weaknesses.

This is certainly true of Floating Weeds (1959), a direct remake of his own 1934 film, A Story of Floating Weeds.  The film bounces all about a small seaside town on the occasion of a performance troupe coming through to put on a show before eventually settling on a small group as its protagonists – Komajuro (Ganjiro Nakamura), the lead actor and owner, his lover, Sumiko (Machiko Kyo), his former lover, Oyoshi (Haruko Sugimura), and their son, Kioyoshi (Hiroshi Kawaguchi), who was raised to believe his father to be his uncle. It becomes clear pretty quickly that the reasons for setting anchor in this town were largely personal, as the show opens and continues playing to half-full, unenthused houses. Rather than feel wasteful, the time spent amongst the large supporting cast is appreciated as the troupe drifts apart and turns on one another, quickly becoming the most bitter of the Ozu films I have seen. 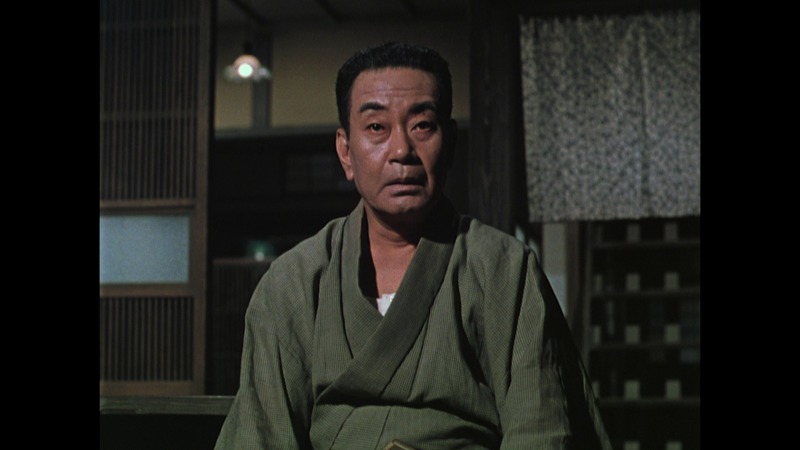 Floating Weeds at once rejects and embraces Ozu’s familiar theme of impermanence, wherein the basic circumstances of our lives – including those closest to us – are necessarily in flux, for reasons both spiritual and practical. Everything changes. Whereas other Ozu films present this as a part of the natural order, here that change largely depends on Komajuro’s decisions, which he posits as purely moral – Oyoshi wants him to settle down with her, but Komajuro claims he doesn’t want his son to grow up with an actor for a father – but in practice reveals itself to be intensely selfish. Truthfully, he just can’t quite settle down. These philosophies will be tested as the film progresses, to often emotionally violent ends. Nakamura really upends the cinematic vision of the loner as an ideal state for a man; there’s very little romantic in the way he carries himself, and certainly the way he treats his lovers. He’s genial enough when things are on his terms, but the second they turn, it gets ugly.

Ozu, like many filmmakers of the era, was wary of using color, and although he had used color in two prior films – Equinox Flower and Good Morning – many consider Floating Weeds the film in which he first found the possibilities of the technological revolution. Ozu had worked almost exclusively for the production company Shochiku for his entire career, but when production on Floating Weeds stalled there, he took the project to Daiei, whose president, Masaichi Nagata, had been longing to work with the famed director. With a change in studios came a change in cinematographers, and Kazuo Miyagawa, who shot such films as Rashomon, Ugetsu monogatari, and Sansho the Bailiff, was enthused about the sudden influx of color in Japanese cinema, and Ozu quickly caught the bug. 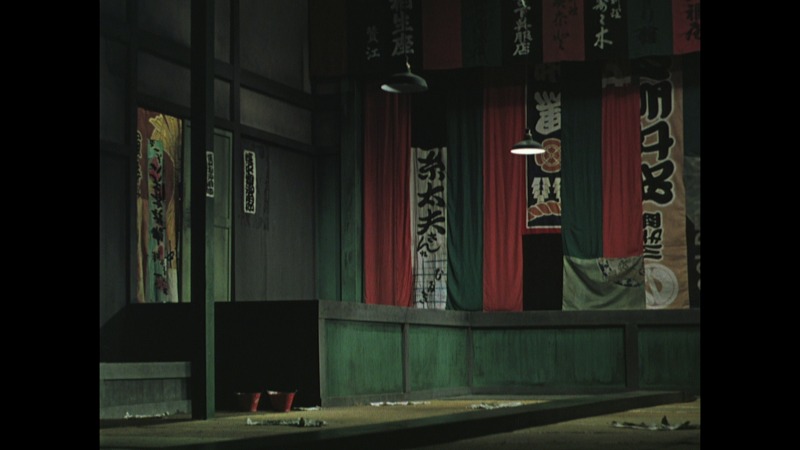 Resultantly, Floating Weeds has a much more dynamic color palette than, certainly, Good Morning (I’ve yet to see Equinox Flower), but the real visual contrast one must take note of is the shift from day to night. The beginning the the film is bathed in sunlight, echoing the buoyant, often comedic environment in which Ozu is playing, while the second half of the film takes place almost entirely at night, emphasizing not just the darker aspects of the story and characters, but those that they try to keep hidden. While this shift could theoretically be done with monochrome film, its emotional and psychological effect is much more pronounced in color.

Masters of Cinema’s new (Region-B locked) Blu-ray does a tremendous job of replicating all of these elements, and doing so in a not overly ostentatious manner, at that. Technicolor lends itself to the bold and pronounced, and while that tack is appropriate on different films (we’ll discuss Gate of Hell shortly), Floating Weeds thrives within the clashes between brights colors and a more faded presentation. I have no idea if this is especially true to the best existing print, but it’s one of those brave decisions that resonates in the final product. Everything else you’d want about the image – stability, clarity, a bit of the ol’ grain – is equally preserved. Audio comes in Japanese with English subtitles, and sounds terrific. 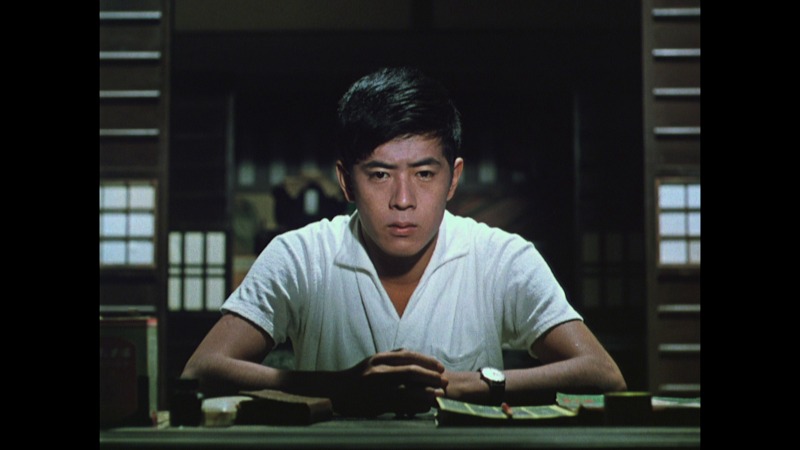 No extra features on the disc, save for the theatrical trailer, but the accompanying booklet comes with an essay by Ignatiy Vishnevetsky and, more excitingly, excerpts from Ozu’s personal diaries. The essay provides a very good analysis of the film and its production, but is a little disorganized, but those diary entries are endlessly fascinating, filled as much with reflections of his own tiredness and drunkenness as they are notes on film production. Translated from Japanese to French in 1996, Craig Keller translated the French exclusively for this edition, so you’re really getting something unique here.

Those who have the Criterion edition of the film would do well to keep it, certainly for also having the original silent film, but also for the commentary tracks. I don’t have that edition myself to compare it to, but looking at DVD Beaver, the differences are marked, though I can hardly imagine the Criterion attains the same clarity of image, being a DVD and all. For Ozu fans, this is an easy get, and for those who have yet to start in, this provides about as fine an entry point as one could imagine, even if, like me, you tend to prefer his black-and-white work. All of his themes are present in full force, and the execution of them is lovely.