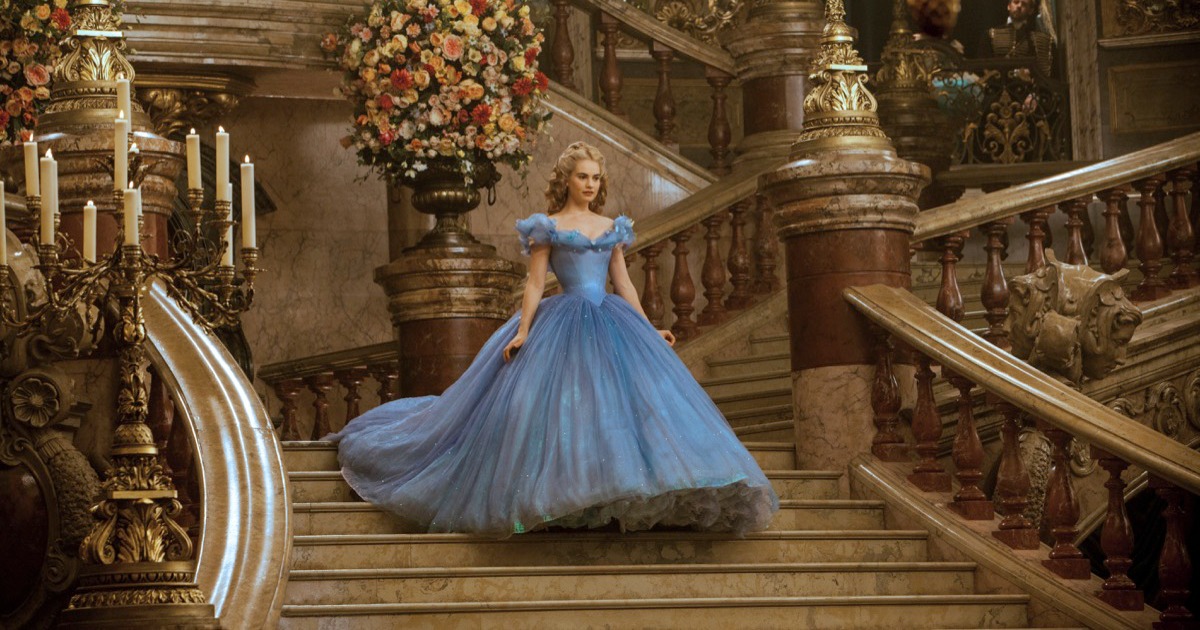 Note: We’re all familiar with Cinderella, so I’ll spare us a plot synopsis and get right to it.

The old feels new in Kenneth Branagh and Disney’s live-action retelling of its 1950 animated feature (itself an adaptation of the Charles Perrault fairy tale). When did a classic take on a fairy tale become refreshing?

The answer is sometime during the current blockbuster cycle of revisionist live-action fairy tales. As Disney leads the way in the Revampathon of iconic properties, we’ve witnessed digitized world expansions, CGI battles galore, villains in the spotlight, needless mythology and lots of flavorlessness. Some of this has been successful (Maleficent translating the devastation of rape trauma) and most of it has not (everything else?). I step into this review admittedly on the defense. Singing the praises of Cinderella also means pushing against the kind = passive = bad line of thinking which has become prevalent regarding the titular character.

The “have courage and be kind” message of Cinderella may not be “rule the world”, but anything less should not automatically imply regressive sexual politics. What matters most for me on a foundational level when servicing women in film (outside of the central issue of desperately needing more women storytellers) are questions like; do they resonate as individuals? Are they more than cardboard cutouts or narrative props? Does the film do justice to a female-centric story? If all women are to be depicted as strong, ruthless, fierce creatures, we’re doing girls a different kind of disservice to the full range of women that should occupy our screens. I want to see girls like Katniss, Hermione, Merida, Matilda, Kiki, and yes Ella brought to life (and hey, can we get some non-white heroines?). And courtesy of Lily James, Ella is brought to life.

Playing a fairy tale heroine tends to eat actresses, even good ones, for breakfast. Working within the ‘princess’ archetype (whether revisionist or traditional) is deceptively difficult. Much of the battle is fought during the casting process. Cinderella and her peers operate within archetypes that tend to register in a Practically Perfect in Every Way brand of irritating or worse; a non-entity. Yet somehow Lily James’s steadfast eyebrows and infectious luminescence makes ceaseless positivity endearing. For all its additional delights, Cinderella triumphs primarily thanks to the lead performance. Chris Weitz’s screenplay provides her with ample support, ensuring she is not relegated to the pitfall function of being a vacant gateway into a fantasy world.

Ella’s outlook on life is sustained by a promise made to her dying mother (a glowing Hayley Atwell) to live by the aforementioned motto. Critically, Ella’s optimism never suggests oblivious ditz. James’s face constantly communicates the effort it takes to live by these words, as well as the earnest attempts to comprehend the heartlessness around her. The only way she knows how to survive is to cling to happy memories and to what is good. Everyone has survival mechanisms, ways of coping with fearful situations; denial, escape at all costs, optimism, hope, self-loathing. What some are seeing as Ella’s doormat weakness is actually quietly defiant survival, and survival has worth in this or any world.

Prominence is given to understanding Ella’s ‘Cinder’-fall-from-grace predicament. In one scene a peripheral character asks why she stays with her stepmother (played with succulent relish by Cate Blanchett) who treats her so horribly. She replies that the house is all she knows (not to mention she has nowhere else to go). This is an only child whose sole meaningful relationships were to her parents (her father is played by Ben Chaplin), and the house is a physical connection to them she is unwilling to sacrifice. The narration explains that she welcomed servitude after her father’s death because the constant work provided much-needed distraction from grief. Her entrance into submission is a gradual and almost imperceptible descent full of small compromises which add up to something much bigger. Her chin-up demeanor may be outdated and regressive to many, but it’s made meaningful here. In a critical additional scene, Ella is given an opportunity to adamantly refuse a mutually advantageous proposition by her stepmother. This is no small act of rebellion.

Living up to one’s parents also occupies the mind of Prince Kit (Richard ‘King of the North!’ Madden). The king (Derek Jacobi) is dying (even by fairy-tale standards this is packed with parental death) and Kit doesn’t want to disappoint his father by not marrying royalty. Theirs is a warm and quite moving relationship, especially considering it takes place on the sidelines. The scenes they share help take the Prince out of the role of Savior, and into the role of, as with Ella, human being. The father-son relationship is just one example of how this story we all know by heart is given a little extra padding. Some choices work (rooting everything in Ella’s relationship with her parents, particularly the father-daughter relationship) and some miss the mark (using the stroke of midnight for an elaborate set-piece, Helena Bonham-Carter’s one scene performance, human lizards?).

In another narrative tweak, Ella and Kit encounter each other in the forest before the ball. And stop the presses because Lily James and Richard Madden (who has blue eyes for days to the point of questioning CGI enhancement) actually have chemistry! Kenneth Branagh’s camera seizes upon their open faces and the performances shine out of them. The energy of their eyes could light a city. Anchoring the stakes is Cate Blanchett as Lady Tremaine, ripping through the scenery with a wily smile, wild-fire eyes (this film is all about the eyes) and big glimmering costume jewels to match. Sandy Powell dresses Blanchett in chic modernized glamour; her clothes proudly project the illusion of power and status. Key cutaways are used to infer how she views herself within the narrative. Ella’s presence suggests a resentful reminder that the world has turned her bitter.

Kenneth Branagh channels his directorial bluster into Cinderella by putting grandiosity side-by-side with a combination of human emotion and the impressions that make up life. With plentiful help from the lavish production and costume design, everything becomes sweeping and magic becomes magical again thanks to that lost onscreen virtue; moderation.

The golden carriage! That blue dress! Those glass slippers! The enchanted objects-on-a-timer are corporeal and intimate and oh-so-pretty. We perceive just how much this temporary transformation means to Ella. Because the ball is not primarily about seeing Kit; it’s about having a night that belongs to her. And she soaks up every moment. So does Branagh. That he and Ella find endless wonder in something as simple as the twirl of a dress suggests there is hope yet for magic at the movies.