Last week’s announcement of two Criterion releases of classic films by Satyajit Ray has once again diverted the attention of many of us, however briefly, to the topic of Indian cinema. For a nation holding approximately 1/7th of the world’s total population, it does seem a bit odd that the culture and history of that venerable civilization still seems to have established a relatively small foothold in the popular Western consciousness. Even among art house film fans like the kind of folks who visit this site regularly, the cinematic output of smaller nations like Japan, Korea or any of the European nations occupy a lot more of our attention and have made a stronger impression on global film culture. I could probably diverge quite a bit from the purposes of this review to reflect on why that is, but the simple explanation can be reduced largely to a lack of exposure. Maybe somewhere down the line, when Satyajit Ray’s films are more readily available (after Criterion fulfills the rumors that have been building over the past year or so about a massive trove of his works that they now have the rights to distribute) and the cultural exchanges between India and North America move our appraisal of India beyond stale cliches about call centers Bollywood spectacles and convenience store merchants, we’ll have a more robust and nuanced appreciation for media produced in that fascinating but still very exotic subcontinent. And to help facilitate that understanding, small independent films like Chris Smith’s The Pool can form a useful bridge.

The Pool was filmed in 2006, released on the festival and indie circuit in 2007, and just came out on DVD earlier this year. Thus, it preceded Slumdog Millionaire, probably the first movie that most Americans would reference nowadays when asked about a film set in India, by well over a year. Both movies won awards – The Pool taking Sundance’s Special Dramatic Jury prize, while Slumdog won the Academy Award for Best Motion Picture (and seven other Oscars! I had honestly forgotten just how dominant the film was that year.) There’s no disputing the fact that Danny Boyle’s “passage to India” will go down in movie lore as a much bigger and more important film, just on the merits of its box office receipts, its trophy case and the overall impact that it made. But truth be told, I’d much rather watch The Pool again before I pay Slumdog another visit. The Pool‘s basis in reality, without the distracting and absurd contrivances of Millionaire‘s “game show” plot device, and a more understated look at what life is really like in 21st century India, is much more welcome in my home theater any time.

The Pool concerns a young man named Venkatesh, in his late teens, forced by the hardships of life to be self-sufficient on the pittance he earns at a variety of menial tasks. Though he’s illiterate, he’s clearly intelligent, only lacking in the opportunity to go to school and understanding that his time to get some education is close to running out. That doesn’t stop him from entertaining notions of making money somehow and enjoying the finer comforts of life. Too inherently decent to resort to crime or high risk ventures to make the quick (but dangerous) cash, Venkatesh has to placate his desire for something better with the idle pastime of gazing upon the pleasures of prosperity from a distance. One of those objects of his contemplation is a swimming pool that he can spy from up in the branches of a tree, peering over the wall that prevents him from sampling its cool waters for himself. After a short while, when the home’s occupants return from an extended time away, he notices that the young woman who lives there is rather easy on the eyes as well. He goes into a benign stalker mode, looking for his opportunities to meet the owner, who he’d like to work for, and make friends with his intriguingly beautiful daughter Ayesha, just to see where it all might lead.

Director Chris Smith takes his time in exploring the relationships that develop between Venkatesh, his younger street kid sidekick Jhangir, and the privileged father-daughter who dwell in that house with a pool that they curiously never enter themselves, even though it’s meticulously maintained and always crystal clear. Each of the characters develop into plausible personalities that most viewers can easily relate to in their own way, complex enough to seem realistic, noble in their respective muddled pursuits for what they want from life, and not so overloaded with emotional baggage or manufactured quirks as to become caricatures. The result is a story that delivers an affirming, positively humane message without resorting to overt emotional manipulation or wildly unbelievable coincidences (viz. Slumdog Millionaire.)

In telling a rather small, universally applicable story that truly could have taken place anywhere, the film might be dismissed as having modest ambitions or being basically a minor-league effort. Perhaps if Chris Smith, more known as a director of offbeat documentaries, had kept the production in the original Iowa setting of the short story that The Pool is based on, with American actors and more conventional surroundings, the familiarity of it all as “just another low budget indie flick” could have indeed made the film more forgettable and anonymous. His ambitious and daring decision to transplant his American production crew over to the western seaside state of Goa does inject something unique and alluring into the mix – the scenery, soundtrack and sheer fascination of discovering a beautiful and somewhat mysterious part of the world is a nice bonus – but those elements provide no guarantee that the film would have actually worked. (See Best Exotic Marigold Hotel for a dismal example of blown opportunity in the “let’s go make a movie in India!” department.) There’s a nice “making of” documentary included on the Kino Lorber DVD that conveys many of the obstacles and anxieties that Smith and his American colleagues had to work through as they quickly found themselves overwhelmed by the logistical challenges and cultural chasm of making a film in a country where none of them spoke the language or understood local customs. The fact that they overcame all that, put together a fine cast of unproven amateurs and one big name Indian star (Nana Patekar), comparable in status to a Robert De Niro or George Clooney on a Hollywood scale, and filmed it all with vibrant aesthetic proficiency, is no small thing to take for granted. The Pool probably won’t carve out a place in the pantheon of landmark films for most viewers, but it’s still a notable achievement. Now that it’s available for home viewing six years after it was released in theaters, The Pool is fresh, cool and inviting. Take a dip! 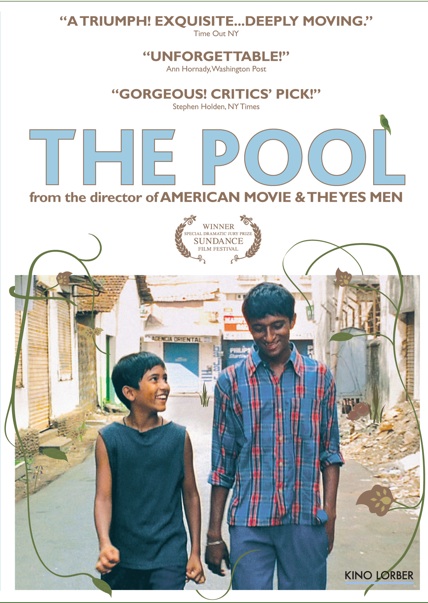