I know I’m not the only one who looks to outfits like The Criterion Collection and Masters of Cinema to introduce me to films and filmmakers with whom I would otherwise be totally unacquainted. While I think providing context and interpretation of well-worn classics is of equal importance, it’s hard to deny the excitement that comes from seeing a film, or in this case, a new set of films, that makes you say, “well, now, what’s this all about?” Masters of Cinema had previously released a DVD edition of Sadao Yamanaka’s Humanity and Paper Balloons way back in 2005, but having now made the transition away from the PAL video format and into NTSC, they seized the opportunity to put out a new edition of that by also including the only two other films by the director known to have survived the gauntlet of time (and, you know, war). The Complete (Existing) Films of Sadao Yamanaka is a wonderful look at an artist whose prolific career was met suddenly with misfortune, though it is unable, naturally, to provide nearly a total portrait.

On the day Humanity and Paper Balloons was released in 1937, Yamanaka was drafted into the Japanese army, dying the following year, just shy of his 29th birthday, in a field hospital. Between his feature debut in 1932 and his drafting, he directed between twenty-four and twenty-seven films (sources seem to be in disagreement about the exact number, but as the MoC booklet sticks with twenty-seven, I’ll use that henceforth). All but three of those are gone entirely, destroyed when film preservation was not a grave concern already, with the war only making even minor efforts impossible (the vast majority of Mikio Naruse’s silent films befell the same fate). But because, perhaps, of Yamanaka’s death and subsequent inability to craft a lasting reputation during the time in which Japanese films were more popularly exhibited in the Western world (the rise of Ozu and Kurosawa in the 1950s, for example), even those that did make it through all this have been unfairly neglected. 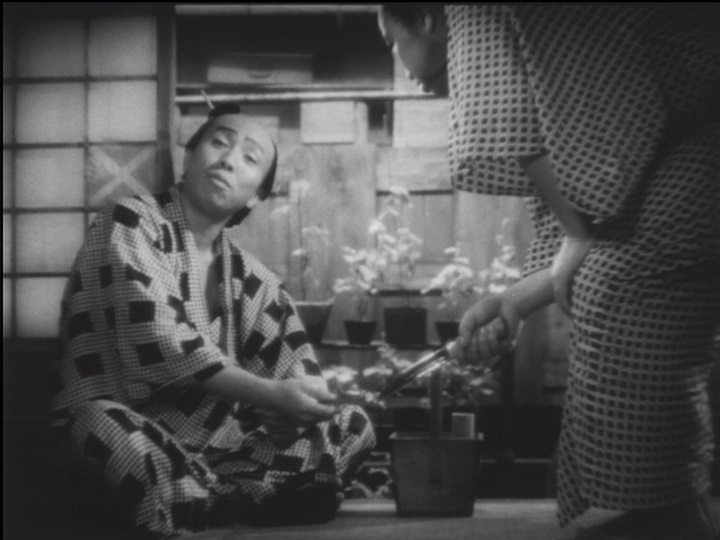 As Tange Sazen: The Million Ryô Pot, Kôchiyama Sôshun, and Humanity and Paper Balloons demonstrate, he was a remarkably versatile artist, capable of moving in and out of comedy, tragedy, excitement, depression, and myriad other unclassifiable emotions in the space of a few frames. Partially, it was easier to achieve in his format – all three films take place in neighborhood settings, and, while each has a definite central conflict, they all benefit from the numerous side stories crafted by Yamanaka’s camera staying with a supporting character for just a couple more minutes, and seeing what their story is all about. It’s the sort of “there are no small parts,” egalitarian type of storytelling that was popular the world over in the 1930s, as communities built up in tighter and tighter quarters. Yamanaka at once highlights the togetherness of city life, while emphasizing that each person’s struggle may be very intensely their own.

Humanity and Paper Balloons may be the most direct in that approach. In it, a ronin (masterless samurai) tries desperately to attain a position with his father’s former master, who disinterest in the poor man could not possibly be more pronounced. At every turn, the ronin is humble and polite, but the master brushes him off until he’s finally in a position to dismiss him entirely, but escape without being confronted with the ronin’s total devastation. It’s a wrenching moment, as much for the simplicity of Yamanaka’s representation as just how thoroughly this moment had been telegraphed. That the ronin had been lying to his wife about the progress he’d been making only underscores the impossibility of escape. He may be masterless, but he’s far from free. 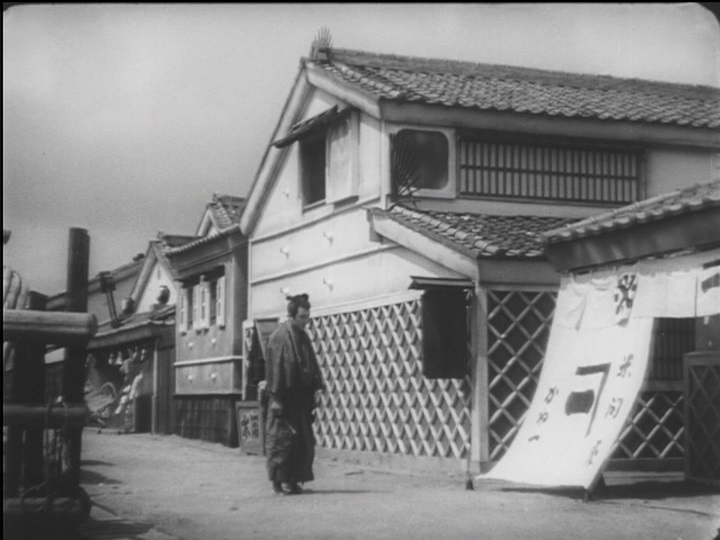 Of the three, 1936’s Kôchiyama Sôshun tends to be less-discussed, for a number of reasons – the action is hard to follow (and in parts, it seems like some brief sections of the film are missing altogether, or perhaps were just very harshly edited to begin with), it has perhaps the biggest cast of the three, making precise character relationships difficult to keep track of during its brief running time, and yet the bulk of the film is spent simply telling the story without grounding it centrally, emotionally or thematically. It’s still well worth seeing, particularly as a portrait of lost youth. It mainly follows a young man who steals a dagger from a samurai, then runs away with a prostitute, which, given that women in such a profession were essentially slaves, is more trouble than it’d already be.

And finally, 1935’s Tange Sazen: The Million Ryô Pot easily runs away (and how) with being the most entertaining of the bunch, even while acknowledging the plight of orphans and the struggle of the lower- and middle-classes. It’s the simplest premise in the world – a bunch of people chase after an object potentially worth a fortune (shades of René Clair’s 1931 Le Million) – and don’t get me wrong, that makes up a great deal of the narrative drive. But I was so taken with the way Yamanaka would step aside of the plot entirely for small, very funny bits of character-based comedy, from a man who’s unable to tell a young boy that his parents have died to an out-of-shape master of a dojo forced to fight a talented swordsman to many, many scenes involving the catching of pet fish. This is the film in which Yamanaka’s pliability really flexes itself, remaining open to a range of expression and understanding, depending on the character, while maintaining a definite lightness of tone. While Humanity may be the more obvious masterpiece of the bunch, given its thematic weight and subtlety of expression, there’s something really incredible going on here. 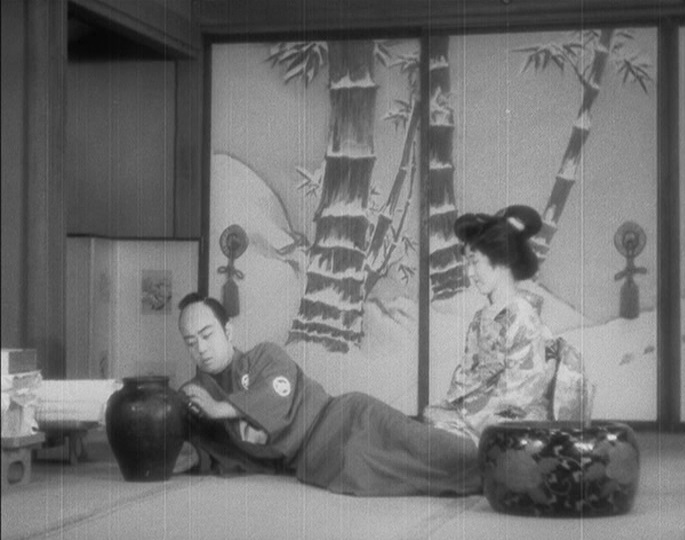 These being the last remaining films by Yamanaka, it stands to reason that the prints themselves would not be in great shape, and you know what, sometimes a little logic pays off. Humanity looks by far the best, as it’s merely faded and slightly damaged. Ryô Pot has a series of vertical lines that run through pretty much the entire film, on top of some missing frames and other assorted damage marks. Kôchiyama Sôshun isn’t as overtly damaged as Ryô Pot, but on the whole presents a far less satisfying image, lacking the relatively minor sharpness that earlier film boasts, though none are what I would call “crisp” in any sense. It’s very easy to see why MoC went DVD-only on this release, as quality sources just don’t seem to be available. Nothing is unwatchable, and the good people at MoC have done all right with what they have (I noticed nothing in the way of compression, even though two of the films share a disc), but it is kind of a “you get what you get” situation.

Special features aren’t bountiful, but a few small fragments cut from Ryô Pot, as well as very short surviving fragments from two other lost Yamanaka films (Genta of the Shore: The Longsword of Dakine and The White-Hooded Thief) go a long way towards earning the “complete” title the package boasts. Finally, scholar Tony Rayns shows up for a video piece to discuss Yamanaka’s life, work, and legacy. It’s very good, if a little under-produced (the bulk of it features Rayns speaking directly into the camera).

And, of course, it wouldn’t be a Masters of Cinema release if it didn’t feature a booklet that more than makes up for the lack of disc supplements. In it, we get a very enthusiastic essay by filmmaker Shinji Aoyama, offering a comparison that’s easy to draw, but harder to substantiate to Jean Vigo, the French director who himself died at a very young age and left behind a woefully short filmography. As different as they were as artists, it’s useful to consider the two side-by-side, as Vigo is widely considered a genius off a far smaller sample size than that of Yamanaka (in terms of running time – the latter’s filmography gives us nearly four-and-a-half hours of material, while Vigo comes in under three), who has thus far been largely overlooked. One can only point to a paucity of material as evidence for so long.

Tony Rayns expands upon an essay that was included in MoC’s Humanity and Paper Balloons release, managing to not repeat himself terribly from his video contribution, and offering a lot in the way of context to the period in which Yamanaka worked, and those that have followed. Film scholar Kimitoshi Satô has the longest piece, focusing on many primary sources from the period, including Yamanaka’s diary entries and thoughts by Yasujiro Ozu. Those diary entries are expanded upon in a great piece Yamanaka wrote in 1935 called “Diary of an Idle Man,” which is as much a defense of his life habits as an explanation of his process (ending with the declaration, “If what drinkers say is lively when utilized in a film, I may insist that drinking is part of my profession. Ah!”

As is their tendency, and their privilege, Masters of Cinema packs a lot more into this release than may first meet the eye, and as an introduction alone to this great talent, I highly recommend checking this release out. Kôchiyama Sôshun didn’t totally land with me, but the other two are really spectacular, and easily worth, for those who have a region-free DVD player, the modest price for which they may be acquired.

The following clip is not representative of the video quality on the DVD.