The extent to which a documentary filmmaker must be involved with his subject is always something that will be fiercely debated. The mere presence of a camera undoubtedly infects anything less than a crisis situation, but a documentarian’s desire to own a given conflict often comes across as self-aggrandizing and false. That Emad Burnat, both the guy behind the camera and the subject of the film, avoids this trapping in 5 Broken Cameras is but one of its many exceptional qualities; it’s essential to the form the film takes.

Burnat originally bought a camera in 2005 to film his fourth son soon after he was born, and he quickly took to the form to the point that, when Israel began encroaching into the West Bank with some settlements that same year, he considered it second nature to film the protest movement that quickly formed in his home village, Bil’in. The film’s title and structure comes from the fact that Burnat’s cameras rarely lasted long – though one actually saved his life in one instance, they took the toll on the occasional battlefield. What emerges in the film is an intensely personal account of a defining struggle between Israel and Palestine, in this way encapsulating the decades-long conflict that for most of us seems personal only in the abstract; though Burnat is rarely on camera himself, he becomes a face for one side of it. That the final product is a collaboration between himself, a Palestinian, and Israeli filmmaker Guy Davidi, who handled most of the editing and landed on the concept for its final form, is a further testament to the artificiality of much of the conflict, and what can come from true cooperation. 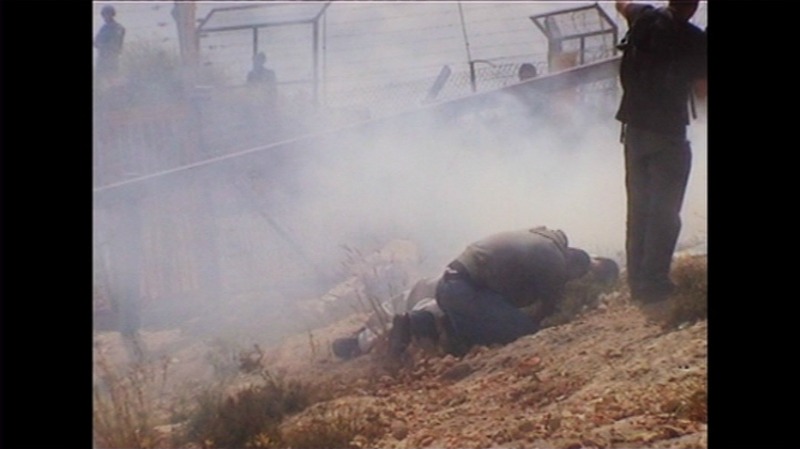 Kino’s new DVD release of 5 Broken Cameras is a very fine thing. The image quality is naturally limited to its consumer-grade source, and though I have little reason to doubt Kino retrieved from it everything it could, it makes it somewhat more difficult to judge in a conventional sense. Burnat has a very fine eye for framing and a precision to his handling of the camera that immediately alleviates any concerns over it essentially being a theatrical release of a home movie. The film is presented in an anamorphic 1.78:1 frame, though much of it is letterboxed into a 1.33:1 frame to account for Burnat’s earlier cameras. Sound is centered on Burnat’s narration (and he has a wonderful, soothing voice for it), which is crystal-clear, and from there, it just depends on what Burnat could capture on the field, though I rarely found myself wanting for clarity.

A handful of short special features – separate interviews with Burnat and Davidi, Davidi’s 2010 documentary short Keywords, and a promo piece about the Greenhouse program, which hopes to enable new voices in the documentary field to find ways of presenting their work – helps round out the package, but the film itself is so good, it’s easily worth the cost alone. Nominated for Best Documentary Feature, this is one Academy Award nominee that won’t be discarded over time. More than an exploration of a single conflict, this is an encapsulation of a region’s struggles, and a universal portrait of fatherhood and familial responsibilities against larger callings.