The crime genre has, almost always, been a romanticized vision of gangsters, money and organized crime. Films like The Godfather, Goodfellas and Scarface are perfect examples of this romantic view. Film techniques such as slow motion, fast edits and the use of pop music are ways filmmakers glorify and magnify violence in these movies. In contrast, it was completely odd to me that the Matteo Garrone’s Gomorrah, which does not follow this pattern, was presented by Martin Scorsese, a filmmaker who is known for such romanticisms. Although I am very well aware of Scorsese’s love for film and Italy, his name at the opening credits was a little jarring to me. After my viewing of the film, however, it felt perfect and fitting. This would be a good companion piece to Goodfellas as they both explore the same themes. This film exceeds and subverts my expectations on what the crime film should be.

Gomorrah is a haunting and sprawling tale of organized crime in Naples, Italy. It is based on the book of the same name by Roberto Saviano, an undercover journalist who exposed many of the practices of the Camorra (a criminal organization in Italy). Saviano is currently in hiding out of Italy because of the book, as there has been a hit taken out on his life by actual Camorra bosses. The film follows five separate story arcs of everyday people in Naples and how the Camorra has effected their lives. It opens with three men enjoying the amenities of a tanning salon, the place quickly turns into a slaughterhouse as these men are gunned down in cold blood. We are introduced to these five stories in such a slowly paced way to construct a world which we are not normally invited to view. We meet TotÃ², a 13 year old boy who becomes involved in this organization by observing a drug deal and returning items retrieved after a police seizure. Other stories revolve around Don Ciro, a fearful middleman that delivers money to the families of imprisoned gangsters, Roberto and his boss Franco who illegally dump toxic waste for the crime syndicate, a skilled tailor named Pasquale who runs a Camorra owned sweatshop, and finally Marco and Sweet Pea. These two cocky young boys are fascinated by this underworld and continuously quote Al Pacino in Scarface, but when they come across an arsenal of guns, they use the weapons to become part of it.

The acts of violence are executed with such precision and nuance, while being portrayed as random. In that way, the violence in the film is based in a reality that builds tension in almost every scene. The director, Matteo Garrone, plays with this tension. There is a point in the film where we are almost expecting gun play and brutality at times, but it never comes. Somehow, Garrone finds ways to show these acts when we are least expecting them. This just feels so real.

Gomorrah is shot in a documentary style with peering camera work that appears to be drifting or floating between characters which adds to the realism of the film. The grittiness is explored through the use of shadows and light. Most of the film is dark, almost black. We are unable to see characters’ faces or set pieces at times, which adds to the feel of intensity throughout the entire piece. We feel a certain looming presence that could be either the Camorra, violence or crime. Money doesn’t seem to be a status symbol or motivation for most of these characters; rather they value survival and power. Characters don’t drive fancy cars or dress in an expensive manner. In fact everything seems to be thrown together and shabby and much of the movie takes place in various poor housing projects in contrast to the romanticized view of crime being a lifestyle of excess. In Gomorrah, the only symbol of status is staying alive.

The most touching moment of the film comes at the end with Pasquale, the tailor. After surviving an attempt on his life he is forced out of the garment industry and takes up a job as a truck driver. While at a truck stop he sees the actress Scarlett Johansson on TV at the Cannes Film Festival on the red carpet wearing one of his dresses. Pasquale is heartbroken as he looks onto something he created and can no longer be apart of. As he watches, the TV commentators spout on and on about her beauty. They note that the dress is “an apparent simplicity, but it’s really very complicated” which is a statement that can also be made about this film. The scene is shown as a reminder of how big the Camorra actually is – a Hollywood A-Lister is wearing a dress from one of their factories.

Matteo Garrone delivers a very intense and gripping film. Moreover, he delivers a wonderfully composed and photographed film that warrants high praise and is a technical achievement. He doesn’t glamorize the crime world, but rather he sheds light on the reality of its shadows.

Gomorrah is now available on DVD and Blu-ray courtesy of the folks at Criterion.

Here are the bonus materials available, courtesy of Criterion.com: 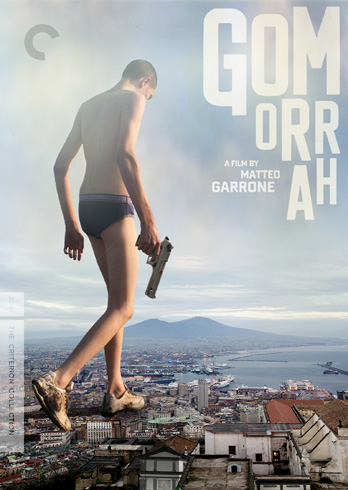 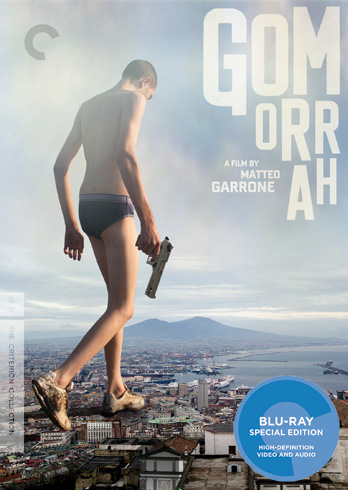