It was 12 years between films for Alejandro Jodorowsky when he announced his making of the film Santa Sangre. Nobody knew what to expect, and for good reason: Jodorowsky is a dividing director. A visionary, a master at his craft, eccentric and difficult to truly categorize, he made films that you couldn’t help but speak about for days and weeks after seeing them. Everything from El Topo, The Holy Mountain and Fando & Lis were films that were like a punch to the temple and were big during the midnight screening boom. But with Santa Sangre, he was coming back after a self contained sabbatical from film making and back to the forefront of cinema. Did he bring the goods or did we get a dud?

We open in an insane asylum, a naked man perched on top of a tree and more animal than man. His name is Fenix (Axel Jodorowsky), and when given the choice between a steak or a raw fish, he jumps down to eat the fish, tearing it apart like a bird. He has a huge falcon tattoo on his chest, which then shows us a real falcon flying around a city and we see a circus. A boy magician is seen, a young Fenix, who has a fiend of a father named Orgo (Guy Stockwell) and a mother who is pure of heart named Concha (Blanca Guerra). Orgo is the ringleader of the circus and has been having an affair with the Tattooed Woman (Thelma Tixou). Concha is the leader of a religious cult who worships a woman who was raped and had her arms cut off by two brothers, and has tried to get it recognized by the Church. When the monsignor curses them, their church is bulldozed and Concha returns to the circus to be an aerialist again.

Fenix believes his family is back together but sadly, Orgo can’t help but continue his affair with the Tattooed Woman. Concha takes revenge by throwing acid on his privates and in a moment of rage Orgo uses his knives and cuts her arms off in a beautifully shot blood splattered display, which transforms her into the patron saint she’s worshiped all along. Orgo commits suicide, all in front of Fenix, which explains the stay in the asylum in the present day. One day, Fenix looks outside and sees his armless mother and escapes the hospital and goes to live with his mom, starting a new performance piece with her, this time being her arms whenever she needs them.

The film is by far Jodorowsky’s most accessible film, which isn’t saying it’s not a surreal fever pitch of cinema that is hard to pinpoint. Jodorowsky is playing with the whole idea of an Oedipus Complex, but instead of the son killing the father, he has taken the tattoo of his father and almost become as psycho-sexual at points like him. Even though Concha has no arms, she uses Fenix as her own puppet, using him for her own means and to kill women who she either wants revenge on (The Tattooed Woman) or is jealous of when Fenix shows any interest. It does have a mostly coherent narrative, with a few intensely macabre dreams, such as an elephant Fenix remembers when he was a kid which was dying, bleeding from the inside and out its trunk.

Besides the mom’s hold on her son, the other constant female in the film is the mute girl Fenix befriended when he was a kid, Alma (Sabrina Dennison). What is interesting is that Jodorowsky cast a girl who was actually mute, which gives a reality in a film that deals with a lot of insanity. Alma was the only thing Fenix had to look forward to as a kid and when he lost his mind after his father killed himself and his mother lost her arms, he was committed, losing contact with her. She finds Fenix again after so many years, and it was like they had never lost that connection.

Jodorowsky also is never shy to show the gore within a film, and in the case of Santa Sangre, we get a good amount of it. Everything from a Giallo-esque first person killing (which was quite surprising) to a knife act gone wrong, Jodorowsky never pans away from the victim. He shows every inch of violence and if you are just a gorehound, you’ll have enough to love here. The difference between this and say, a regular slasher flick, is that Jodorowsky infuses his visual flare at every turn, a combination of Bunuel, Hitchcock, Fellini and Argento, all mixed up and wonderfully painting a colorful and bizarre picture for all to see.

Severin has done an amazing job here with their presentation of Santa Sangre, a film that hasn’t been on DVD or Blu-ray in the States. Giving what I like to call the Criterion treatment, they’ve cleaned up the picture, which has never looked this good before. You get an insightful commentary with Jodorowsky and Journalist Alan Jones. A Jonathan Ross hosted show from 1990, For One Week Only, which is a candid interview with Jodorowksy. We also get a documentary on the real life inspiration for the film, Goyo Cardenas. A 2003 interview with Jodorowsky, an on-stage Q&A, deleted scenes with commentary, some Simon Boswell videos and a trailer. The most amazing thing is the feature length documentary, Forget Everything You Have Ever Seen: The World of Santa Sangre, which is one of the best making-ofs I’ve seen in quite some time.

Madness is prevalent here, but to give more away would be a shame for all those who haven’t seen the film. Retribution is also something Fenix is attempting to get throughout the film and we as an audience just want him to live happily ever after. This being a Jodorowsky, we never know exactly what we’re going to get until the final minute and there’s nothing wrong with that. There isn’t a boring minute in this film, and it is a cult film that has become a classic in many eyes, including my own. A film that has many layers, each one waiting to be opened. A must have disc from Severin. 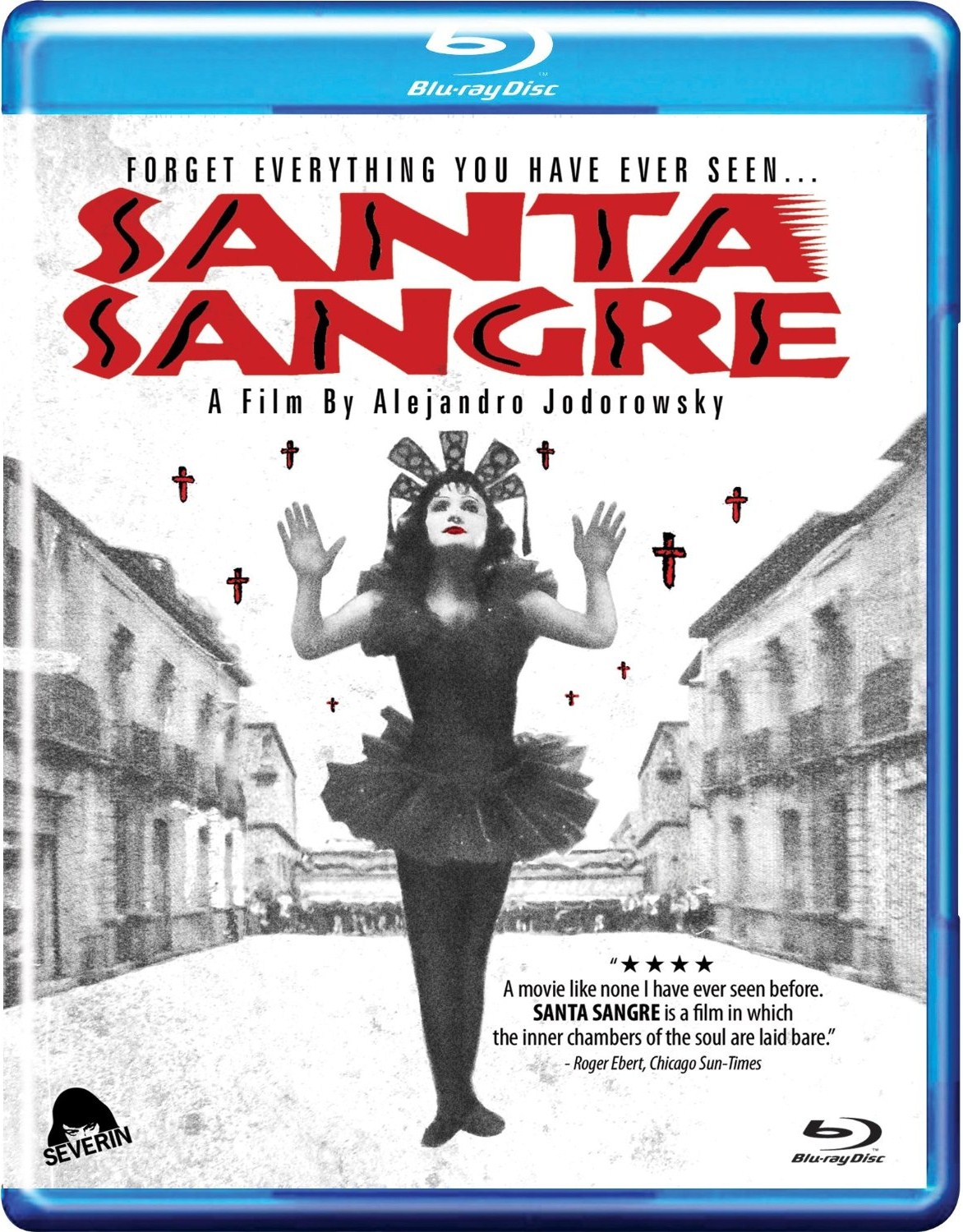