The second DVD featuring some Gamera rumbles this week from Shout! Factory is a fun duo of films, dealing with a kaiju knife fight and some World’s Fair action. And we get a shoddy return of a villain in such a way that itwill draw a giggle or two. Many people say this was the beginning of the end for the franchise, but I’m a bit of an optimist when it comes to these films.

Gamera Vs. Guiron is an interesting film from 1969. It has one of my favorite baddie movie monsters of all time (Guiron) and has one of my favorite kill scenes as well. It wasn’t until now that I got to see this film uncut the way it was supposed to be, due to rights issues and Sandy Frank butchering it like he does. It tells the story of Akio and Tom, who spot a spaceship that lands in a nearby field. Curious boys, like they are, they go to the ship and enter it and are whisked away to the planet of Terra, where they meet two beautiful and evil women, and their creature Guiron, who does battler with Space Gyaos and destroys him in such a fast manner, it’s a bit sad. Also the scene was quite violent and seeing this in the way it was supposed to be seen was a revelation.

Gamera almost gets killed but ultimately defeats Guiron by flipping him on his head, sticking his bladed head into the ground and ignites a missile that was lodged in one of his indents and BLOWS UP HIS HEAD! Gamera then brings the boys back to Earth and the day is saved yet again. Guiron sadly has not appeared in any other kaiju films but I think it’s about time for him to return to the forefront of monsterdom.

Next up is 1970’s Gamera Vs. Jiger, another strange entry in the series. It begins with the 1970 World’s Fair about to take place in Japan, so construction is going on at all the establishments and buildings to make sure everything goes well. While some scientists on Wester Island find a mysterious statue called the Devil’s Whistle, they decide they want to bring it back to showcase at the World’s Fair. Gamera is quite pissed off about this and tries to stop them in the safest way he can but they shoot at Gamera and take the statue anyway. Sadly, they should have listened to Gamera because on the ship back, the crew starts to go insane and the only explanation is the statue itself, which is producing some sort of sound from within. When they finally remove the statue, Jiger appears and she’s ready to throw down with Gamera right from the start.

Jiger actually wins her first fight with Gamera by pinning his legs and arms fully through, therefore disabling his flying and then throws him on his back, totally whipping his tail (so to speak). Jiger is in search for the statue and nothing will get in her way due to the pain the sound is causing her. She showcases a heat ray as well that can destroy entire city blocks. Gamera comes back to fight, gets trounced again and to make matters worse, Jiger lays an egg inside of Gamera’s chest with her stinger. This puts Gamera into a coma and Jiger is on the loose still, destroying everything in her path.

I don’t want to give the whole plot of this film away, but baby Jiger is in the film, resuscitation via electrical shock to Gamera is involved and the statue’s white noise element is a constant deterrent for Jiger and her child. This is probably one of the more ‘crazy’ Gamera films, with another creative creature in Jiger and making her a female just adds to the sexual tension… just kidding. It’s an easier way to explain a child version, which gets no complaints from this kaiju lover.

Again, I can not commend Shout! Factory enough for taking the time to put these films back out to the public to devour the way they deserve. Are these films better than the Gojira series? I wouldn’t go that far, but I would never say they’re the Go-Bots to Gojira’s Transformers. That wouldn’t give any credit to the Gamera series at all. Gamera was more of a heroic creature, and after each film, we see him in the role of Japan’s savior for the most part. He’s more like Mothra than Gojira, even though they have some similarities. No special features on the disc, but we do get newly translated English subtitles and to anyone who remembers the dubbed versions, we also get two different English dubs. Another great release from the pop culture aficionados over at Shout! Factory. 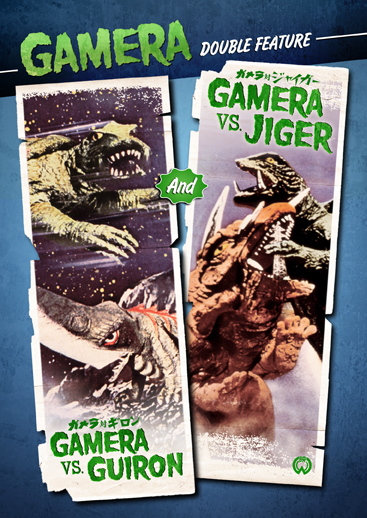 Gamera is back, battling oversized monsters in the fifth and sixth movies in the Showa series of Gamera monster movies, Gamera vs. Guiron and Gamera vs. Jiger. Fortunately, for citizens of planet Earth, anyway, Gamera prevails, sending these terrifying creatures to their doom.