Shout! Factory has come back strong this week with two new DVDs in their recent acquisition of the Gamera franchise. And they’ve taken the next four films in the series and made two double feature DVDs, which makes for a fun and balanced viewing session.

Gamera Vs. Gyaos (or Gamera Vs. Gaos here in the States) from 1967 is the direct sequel to Gamera Vs. Barugon has Gamera playing more of a hero role this time around, helping Japan fight a new threat to the land, Gyaos, who is a huge bat creature. How could you go wrong with Gamera fighting a gigantic vampire bat? You really can’t, to be honest, and we have some typical battles between the two throughout the film. As usual, mankind somehow awakens/irritates this evil and it starts to devour people and destroy anything in its path. Gamera tries to protect Eiichi Kanamura, and shows Gamera’s intelligence when he realizes Gyaos is weak against heat.

But Gyaos thinks Gamera is defeated by this new creature, which tends to happen in these films and the Gojira films as well. But it makes for a fun romp, and this film has a bit more violence throughout, which was a bit surprising. A scene involving Gyaos removing his own foot because he senses his death will come about if not done is a bit shocking in one of these films. Ultimately, though, it has a great idea for a villainous monster but for some reason never truly delivers the goods that the previous films and upcoming selections did. But a great little tidbit is that this is the first film we see Gamera bleed from one of his battles.

Following that is Gamera Vs. Viras (also known as Destroy All Planets in the U.S.), a pretty good addition to the franchise that shows us what Gamera’s true weakness is: his love for children. Gamera is seen right away destroying an enemy alien vessel. These aliens are evil and send a distress call before being vaporized, showing them Gamera, who is their enemy now. We then see Gamera playing with some Boy Scouts on a submarine, racing with them. But the fun isn’t for long when a second alien vessel comes and captures Gamera and the boys.

Gamera is then scanned by the aliens, who implant a device in his head where they can control him to do their bidding. While the boys are trying to escape we see Gamera destroying cities, dams and anything else that comes into his path. The boys find another monster, a squid-like being, who they think is also a captive of the aliens. Little do they know that he is their leader. They finally get Gamera free and in one of the most ridiculous moments on film, the aliens don’t share human forms at all and instead form into Viras himself. It’s a beach side battle which ends when Gamera comes to the conclusion to haul Viras into space and freeze him to death.

To be honest, I was looking forward to the next Gamera films in line from Shout! Factory and they don’t disappoint. They don’t necessarily wow either, but they are fun films that will remind you what it felt like to be a kid on Sunday morning. One is a little lackluster and the other has roughly 20 minutes of stock footage in the film. Of course it is known that many films, especially sci-fi films from that era did that in droves. Is that a proper excuse though? Not really, but it was the business and they did it in every country, and it’s always a fun game to pinpoint which parts of the film are stock footage.

But the good thing is that Sandy Frank has nothing to do with these releases whatsoever, which makes a kaiju fan like myself a happy camper. For anyone who doesn’t know who Sandy Frank is, Mystery Science Theater 3000 and film fans everywhere didn’t appreciate his horribly re-dubbing, re-editing and wrongly translating these films, among others, for many years, being the only way you could actually watch these films. There are no extras in this release, but the one thing that will make everyone breathe with a sigh of relief that they have the original Japanese track and English translations, being the first time in the United States that these films are seen the way they were meant to be. Shout! Factory also did a stellar job with the transfers, not overdoing it but making the films look better than they have in any home video release. 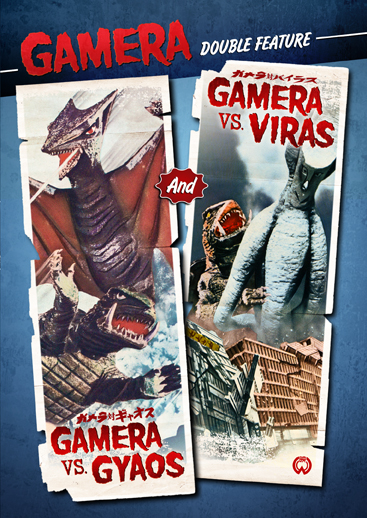 Gamera is back, battling oversized monsters in the third and fourth movies in the Showa series of Gamera monster movies, Gamera vs. Gyaos and Gamera vs. Viras. Fortunately, for citizens of planet Earth, anyway, Gamera prevails, sending these terrifying creatures to their doom.