“Don’t be diabolical. Don’t spoil the film for your friends by telling them what happens. Thanks on their behalf.”

Those are the words of Henri-Georges Clouzot at the end of the film, Les Diaboliques. For good reason too, the film is a murder mystery. Not because of who has killed who; we’re told that information right away in the film. The true mystery is what occurs throughout the second half, which makes Les Diaboliques one of the classics, not only in the horror genre but in film in general. It’s no surprise that Clouzot was called the ‘French Hitchcock’, but I think of the man as more of his own filmmaker, not taking from another.

We are introduced to Christina Delasalle (Véra Clouzot), wife of Michel (Paul Meurisse) who is having an affair with Nicole (Simone Signoret). Sounds like a typical film, but what makes it interesting is that Christina and Michel are the headmistress and headmaster of a school they run and own, while it isn’t any secret that Michel and Nicole are having a relationship. Michel is a tyrant, one who abuses all those around him and his power is over these women and every other teacher and child at this school. Christina is friendly with Nicole as well, so it gives a different spin on the relationships between people, and makes sure that the affair isn’t the center of the film.

The film centers on Nicole’s plot to kill Michel with Christina, using an odorless poison to debilitate Michel while they’re away on vacation and to drown him. “He won’t feel a thing” is what Nicole keeps telling Christina. And this is the closure Christina needs from her abusive relationship with Michel, who she wants to be free of from good finally. Christina is a fragile woman, who has a bad heart and just tries to get on by, day by day, because the children mean most to her. It’s a sad portrayal, one that Véra Clouzot plays with such sincerity. You feel for this poor woman, who is married to one of the true scums of the earth, played with a icy evilness by Paul Meurisse.

It’s Meurisse’s main job to make us hate this man to the point where we want these women to succeed in doing an act that in its own way is as horrible as anything that can be done; murder. As an audience, we’re still appalled by this murder but in the end we don’t truly blame them, as that it’s the only way they can get away from his grip on them all. But as I said earlier, the murder mystery comes about after the murder itself when the body has been placed at the bottom of the school’s pool and when it is emptied, a surprise is discovered. There’s no body there.

This is where the film begins a downward spiral, with Christina not being able to handle the pressure of keeping this secret, running out to the morgue when a body is supposedly found in the channel and when a retired inspector is perplexed by this woman not reporting her husband being missing but assuming the worst has occurred. We then have a battle between women, as to who is going to break first and who will be the first to perhaps call the police and blame it on the other. A scene dealing with this in particular is tense and when the phone is hung up, we’re relieved and can breathe a bit easier for a little bit.

The film Henri-Georges Clouzot did after his successful The Wages of Fear, Les Diaboliques (or Diabolique for the American release) was yet again another revelation in his career as a filmmaker. Criterion re-released a new Blu-ray edition this past week but a month before they did, we had a new Blu-ray/DVD combo pack from Arrow Films in the UK within their new line of films, Arrow Academy. This is the one we’re covering here, and their Blu-ray transfer is one to behold. The whites and blacks are sharp, and we just get the best of what Clouzot was showing us on the screen.

A big worry with any foreign film is the choice of subtitles. One wishes most would use yellow subtitles for black and white films, but they aren’t too bad for this release. It’s something we have gotten as used to as possible and doesn’t deter us from what is being said. On a smaller TV I can see it being a bit of a problem, but in this case it works adequately. Arrow also gives us a nice array of extras. Ginette Vincendeau, a French cinema scholar, gives us a nice informative introduction to the film, which should be watched after the film, which runs about a half hour.

Susan Hayward, author of Les Diaboliques (Cine-file French Film Guides) provides an insightful commentary track, which Vincendeau does reference in her very own introduction. The original trailer for the film is also included. And Arrow’s own wonderful touch, providing the consumer with newly commissioned artwork and three other optional choices, all being original posters for the film. It’s a great touch that they’ve become famous for and one we appreciate. They also include a written conversation between Paul Schrader and Clouzot with rare illustrations by Leon Barsacq and a new essay about the film by author and critic Brad Stevens.

Arrow Films have put out a wonderful release here with Les Diaboliques, a classic film that is still regarded today as one of the great thrillers of all time. With their new Arrow Academy line, they might be giving Masters of Cinema a little run for their money and giving the consumer a new company to be rooting for with what films they will be releasing next. This is a wonderful addition to the Criterion disc, and both should be on your shelf so import this one as fast as you can. One can not say enough amazing things about Les Diaboliques, and Clouzot truly cemented himself as one of the greats. And to anyone who gives away the ending, they truly are a diabolical one. 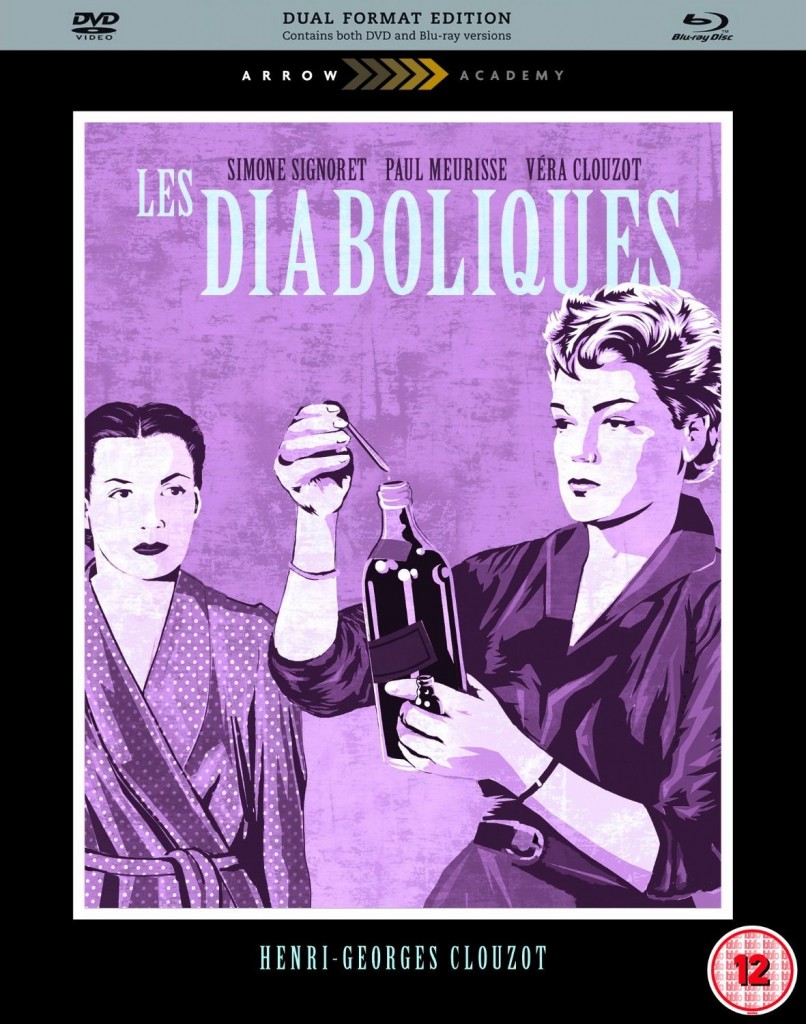