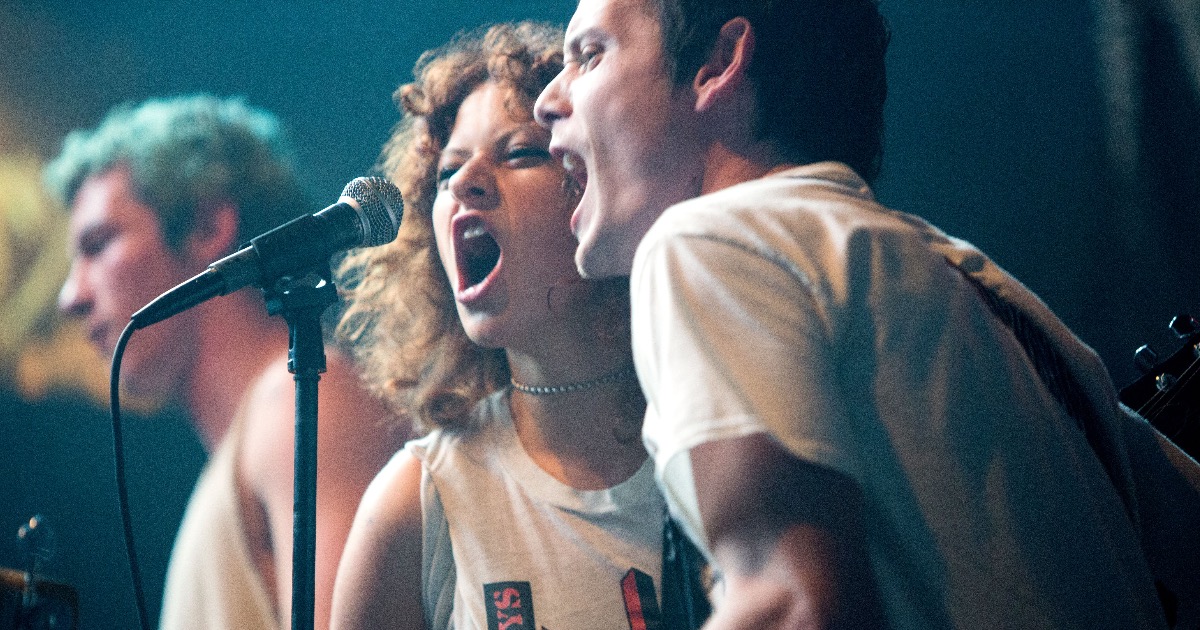 When I was younger, I would consider myself a punk rock kid. I would go to shows all the time, in clothes that I pieced together from other clothes. A little dirty but not too crusty. Whenever a show would be going down, I would go with a few friends. No matter how big or small the venue (I preferred smaller because I could get up close to the band in that case), especially when I was going to out of the city shows. The ones at colleges or small hole in the wall joints. But anytime I saw a few skinheads around, or if one of the bands was a pro-skinhead band, I made sure to stay out of the pit and on the sidelines because I knew hell was about to break loose.

Which brings us to the movie Green Room, the new film written and directed by Jeremy Saulnier, he takes a simple premise: people trapped in a spot while evil forces try to take advantage of them, and brings it to the punk show. A skinhead punk show, which is already a horrific image, with swastikas and SS written everywhere. Of course like a lot of horror films, they are led there by some sort of force, in this case a punk rocker who had a show lined up with them but it being cancelled and him not telling them, they were about to cancel their tour when surprise, he has a cousin who is involved in the skinhead scene, but he can guarantee them $350 for a gig up toward Portland. What could go wrong?

And that’s the power of the film Green Room. Even though they have a bad feeling going into this show at the last minute, they’re desperate for the money and would rather be able to coast on back to their home as opposed to driving on fumes and siphoning off gasoline from random cars on the way. The band is a four piece, led by Anton Yelchin, Alia Shawkat, Joe Cole and Callum Turner, and they work as this tight knit group. Going into the den of the skinheads, they’re just going to perform and be on their way. Pat (Anton Yelchin) even has an idea to mess with the crowd, by doing a cover of The Dead Kennedy’s Nazi Punks Fuck Off, which of course draws the crowd into a bit of a frenzy. But they go about their set and they survive playing their songs and head back to the green room.

This is where the conflict comes into play. They’re told not to go into the green room because the headlining act are inside. So they are in the hallway, getting their stuff to take back to the van when Sam (Alia Shawkat) realizes she’s forgotten her phone in the room. Pat goes back into the room to grab the phone and the charger when he sees a violent act has taken place. Pat tries to call the cops but is stopped and now they can’t leave. At first their guaranteed the cops are coming, but it’s all a ruse because they have two young believers (skinheads in training, basically) who pose as the stabbing victim and are taken away. Which then enters the central villain, the soft spoken leader of this group of miscreants, Darcy Banker (played with subtle villainy by Patrick Stewart).

Stewart is a powerhouse here, not because he’s chewing the scenery but instead is doing the opposite. He’s cold, calculated, angry that his people didn’t take care of this in a simpler manner, but will get the results he wants. He tries to talk ‘sense’ at first, guaranteeing them freedom but they’re not buying it. And it’s a game of cat and mouse, which side will topple over first. We feel for the band Aren’t Rights, because they just want to play their music and be on their way home. But because of a chance encounter, it spirals into a cavalcade of violence, one in which nobody in the band will ever be the same again.

Everyone is in top form as well, Anton Yelchin being an actor I like a lot but sometimes I’m not so thrilled by some of his choices. But he always gives it his all and in this, I’m impressed by him not wanting to be the leader in this maelstrom, but having to accept the responsibility. Alia Shawkat again is great, which is no surprise because I like her in everything she appears in. Joe Cole as Reece shows he’s more than a drummer, someone who knows some mixed martial arts, which do come in handy at one point. And Callum Turner’s Tiger, the singer of the group, is the chill one in the group, but when someone close to him gets injured severely, he’s there to help and be a comforting voice when needed.

Imogen Poots (who I will always say has the name who is the most fun to pronounce) is also fantastic as Amber, a skinbyrd (a female skinhead), who is thrust into this tight knit group and fights alongside them, while also fighting off the stigma against her. It’s a very subtle performance, which is needed in a film that is so damn intense from start to finish. Once their set ends, it’s non-stop grabbing at your seat intensity, one where at the screening I was at, while not packed, I heard audible gasps, sounds of disgust and shuffling in seats from what was unfolding on screen in front of us. It was a screening any director would want to witness, because I believe people were reacting to every beat, which shows how methodical the script and direction by Saulnier is.

Being at a punk show where a group of skinheads came down on a few smaller kids and tried to beat them up for no reason as they just wanted to show superiority, this film made me harken back to my youth and it cut close to home. It felt authentic the whole time, this dirty warehouse, a DIY punk rock venue where a small subsection of civilization could go and spout some hate. It just so happens that a group with no ties in this world got mixed up in it all and could never have imagined the hell they were about to experience. While we hope they survive, we still enjoy the bumpy ride. Hoping for the best, expecting the worst.