Only a few days after he’s been released from prison, Tony Le Stephanois (Jean Servais) is reunited with his former partners in crime Jo (Carl MÃ¶hner) and Mario (Robert Manuel). They want him to do one more job at a Parisian jeweler’s shop, which if successful means they can retire. Tony declines to get involved again in the business. Tony meets up with his old girlfriend Mado (Marie Sabouret) who has been seeing a gangster named Pierre Grutter (Marcel Lupovici). Enraged by this relationship, Tony savagely beats Mado for being involved with Grutter.

Tony then agrees to do the job, but not because he wants the money. He wants to hit he jeweler’s safe instead, not the outside window. We are then introduced to Cesar (Perlo Vita, better known as the director Jules Dassin), a master safe cracker from Milan and a colleague of Mario’s. They then plan the heist meticulously, detailing the intricate alarm system that is the biggest problem. And then we get into the meat of the story, the 30 minute heist detailed on screen, with them drilling a hole through the ceiling in the upstairs flat from Sunday night to Monday morning, when nobody will be around.

Everything seems to have been too easy, and of course this is where the deception, a bit of double crossing, an angry gangster, heroin addiction and a lot of murder to round out the movie. But one doesn’t want to give away the plot bits that are essential to viewing it for a first time and for some reason there’s a nagging feeling telling me not as many people have seen this film as one would think. Even though this has been in the Criterion Collection for awhile now (spine #115), for some reason it hasn’t gotten an upgrade or a newer cover and is ready for a Blu-grade. Everyone is amazing in this film, top to bottom, especially Servais, who gives his Tony a well rounded, sometimes unlikable arc, yet by the end of the film you are in his corner. You can never fully read him, and the depth he gives to the character is astonishing. The soundtrack, by Georges Auric (who did Cocteau’s Beauty and the Beast) is also amazing. And Dassin has never been better, which is perfect that he won the Director Award at the 1955 Cannes Film Festival.

But luckily Arrow Films has done the deed, with another release from their Arrow Academy line. They’ve already wowed me with their presentations for Bicycle Thieves and Les Diaboliques and they’ve gone three for three now.

The film has never looked as good as it does with this release. It actually rivals some of what Criterion has done with b&w era films, especially from France, and I have to give them the utmost respect for doing so. It looks as if it came out last year, not over 55 years ago, and it’s a testament to the hard work the folks over at Arrow are doing. And luckily it’s in its original 1:33 full screen ratio, because it always worries me when some people might think a widescreen presentation might benefit an older film. Shame on those, but in this case it’s as perfect as can be.

We also get a great introduction to the film by French cinema scholar, critic and author Ginette Vincendeau. We then get two amazing supplements with Jules Dassin himself, who sadly passed away in 2008. A 30 minute interview with Dassin detailing the film Rififi and how it came about, his blacklisting, the cast and crew he got to work with and the script process. The second is a Q&A with Dassin, where he discuses the film in more detail and various other points that is indeed intriguing. It’s rounded out by the original trailer.

Imagine being a well respected director in Hollywood, making some of the greatest film noir of all time. Then you get blacklisted because of McCarthyism and had to move away to France, who took him in with loving arms and where he revived his career. It sounds like a film itself, but it’s actually what Jules Dassin, who made such classics as Brute Force, The Naked City and Thieves’ Highway before having to leave his career. In retrospect, if it wasn’t for the horrible way he was treated, his seminal Rififi would have never been made, therefore not influencing the heist film as we know it. It’s a scary thought to think. But thankfully he didn’t give up and instead persevered and made one of the greatest crime films of all time. Look at any heist film after watching Rififi and you will always remember where it all came from. 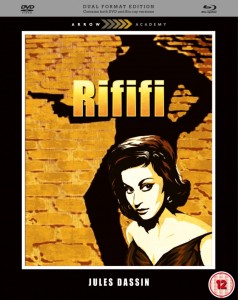