Larry Blamire is a lover of the films of yesteryear. But not the sprawling epics or strategic war films of yesteryear. He’s a genre lover. B-movies that are still loved today. The man who made The Lost Skeleton of Cadavra, which became a cult hit after it came out in 2001 from word of mouth, has come back to show us what he thinks of the haunted house murder mysteries of the 1930’s with Dark and Stormy Night, a clever parody film that hits home to any lover of The Old Dark House and others like it.

Sinas Cavinder has just died and the reading of his will is about to occur at his large estate. We have the Cavinder family, friends of Sinas, a couple of reporters and a series of random strangers who happened to be driving in the middle of nowhere who end up at the house. Sadly nobody can leave because the bridge has somehow been washed away. Trapped, they have no choice then to stay the night. One by one, the lights go out and so do people’s lives. A phantom stranger is killing them and it’s up to the plucky reporters and a New York cabbie to save the day. But is the phantom actually Sinas himself, back from the grave?

The great thing about this film is that it’s a loving homage to the murder mysteries of the ’30’s. The music is atmospheric and the models, while being cheesy looking, fit the mold all too well. A cast of great character actors and unknowns (well, unknown to the public eye, not to anyone who watches any of Blamire’s other films), it doesn’t follow the routine comedic formula. It has witty banter and some great vaudevillian style comedy thrown in. One scene in particular has a note that is found next to a dead body. One of the patrons picks it up, reads “You will be next.” and freaks out. Another person asks why they are freaking out, and they read it again, and that person then screams. And it goes on for a good minute and a half. The age old ‘keep it going until they stop laughing’ and then hit it to the point of laughter again is a hit or miss situation, and Blamire knows how to hit the mark.

For all you Lost fans out there (which I am one of you now), Daniel Roebuck who played Arzt himself is the star of this mystery, playing 8 O’Clock Farraday, a reporter who is in need of a big scoop. And that’s what this film has in droves: strange and quirky names that just make you laugh a bit. Mrs. Cubcupboard, Seyton Ethelquake, Teak Armbruster and Dr. Van Von Vandervon are but a few of the names that Blamire has mashed together to make you giggle a bit, especially when they are delivering the lines so seriously.

The film has the look of an old 30’s murder mystery, and that just shows how well versed Blamire is at these parodies he makes. This isn’t the sad parodies we’re used to nowadays, where they just throw nonsense at the screen and don’t even care if it sticks, as long as it’s a pop culture reference. This film has that certain feel that an older film would have and the acting styles that the characters are using are just the icing on the cake. A big shout out has to go to Brian Howe for doing a wonderful over the top performance as Burling Famish Jr., pencil thin mustache and all.

Again, Shout! Factory has done a primo job with their package for Dark and Stormy Night. You get a behind the scenes making of featurette, a gag reel, the colorized version of the film and a director and cast commentary track, which shows how enthusiastic they all were while making the film. As I said above, Dark and Stormy Night is a great homage to those mystery films of yesteryear, and Blamire just shows why he’s at the top of the parody pile.

Also, look for Bob Burns coming out of retirement as the gorilla Kogar. That was a pleasant surprise in the film. 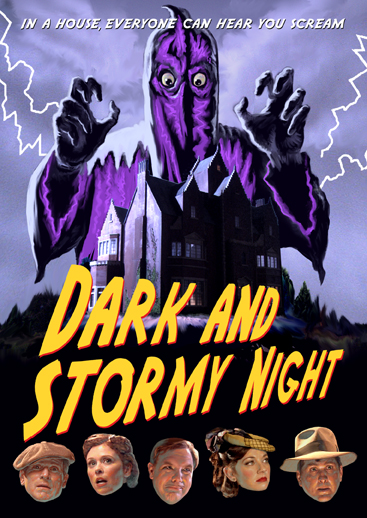 Set in the 1930s, a family of a deceased rich old man are gathered for the reading of his will in a gloomy old mansion. They soon find themselves being murdered by a mysterious phantom while two rival reporters compete for the story.