The days of the double feature. Long since dead in the normal every day theater chains, we sometimes get them in cool repertory houses, such as the Alamo Drafthouse in Austin and the New Beverly in Los Angeles. When the film Grindhouse was released, I thought there was going to be a resurgence to double features, but sadly the box office proved otherwise. Luckily though, some DVD companies have decided to put two films together, sometimes alike and sometimes not alike at all, with random trailers in the beginning and between the two films. One company is Shout! Factory and they’ve been doing so with their Roger Corman Cult Classics Double Feature DVD sets and their newest one, The Evil & Twice Dead are two haunted house stories, similar in concept but completely different in output.

The Evil (1978) stars Richard Crenna as C.J., a psychologist who buys an old mansion at a bargain price and wants to fix it up and make it a new drug rehabilitation center. With the help of his wife, a friend and students, it shouldn’t take long to have this fixer upper ready for the world. Sadly the mansion has its own agenda when a cross is removed and Satan himself is wreaking havoc on the inhabitants. Yes, I said Satan himself is in this house, and we see him in a scene that the Wachowski’s must have seen late one night for their Architect scene.

It’s an above average Amityville Horror lookalike. Only is a copycat in the premise of a haunted house. Instead of a family, this time we have college students, a professor, a psychologist and his wife. Oh, and a groundskeeper does get burnt alive in the first 5 minutes. My only complaint with the film is the not so varied deaths that are thrown at our protagonists in the film. Too many burnt offerings and electrocution for my taste (as a horror fan, you want some variation). But the death by quicksand scene is fun and unexpected. Even though the victim could have walked anywhere else to get away. But it’s definitely a good first film in a double feature.

Especially when that next film is Twice Dead (1988). This is a film I have a history with that I didn’t even remember I had until it came on. Twice Dead was a film that would come on every so often on local NYC channel WPIX 11. I’d stay up late, with my trusty Zenith black and white 13 inch TV and watch neutered versions of horror films. But it didn’t matter, at the age of 8 to 15, because it was my only gateway to these movies besides tricking my parents to rent me certain films. And one such film was this haunted house movie, but unlike The Evil, which could get a bit boring at points, Twice Dead was always a fun romp to me. Until I forgot the name and didn’t hear from it for over a decade.

I’m happy to know that I love this film and couldn’t believe how horrific this film gets at some points. And you just love the family to death and want the brother and sister to be rid of the neighborhood punks who call the mansion they just inherited their own. You know, because by movie punk law, if you squat there, it’s yours. The film begins with a great creepy prologue with stage actor Tyler Walker, who decides to hang himself, but first plays a record and dances with the mannequin double of his long lost love. Weird scene that gives you the basic story that he’s going to be haunting this mansion for all time. Simple enough, but the film swerves around, teasing us with an actual haunting halfway through the film and pulling the rug from under us when we see what really is happening.

It’s one of those films that the characters keep the plot going, and it isn’t a movie that changes the genre in any way, but is a serviceable and enjoyable horror film. You’ll chuckle through it at points and then cheer when certain people get their comeuppance. It’s definitely the better of the two films, but the whole package Shout! Factory has put out is above and beyond what most companies would do with this material.

What’s great about this DVD is the actually Double Feature experience they have given you with watching the two films back to back, which is the ideal way to do so. You start off in a movie theater lobby and choose both films and go in to the theater and we start off with two great Roger Corman trailers, one for Kingdom of the Spiders (A horrible William Shatner movie) and the other for one of the best of Corman’s produced bunch, Death Race 2000. The first film, The Evil, then plays and we go to an intermission with two more trailers, The Terror Within (a decent Alien ripoff) and a comedic sci-fi Traci Lords starrer, Not of This Earth. And then into the second film, Twice Dead. A great experience in watching both of these films. But what’s even better is that each film has a commentary track. The Evil has director Gus Trikonis, writer Donald Thompson and director of photography Mario Di Leo. Twice Dead has co-writer/director Bert Dragin and actor Tom Bresnahan.

With The Slumber Party Massacre Trilogy release and this double feature DVD, you can’t do very wrong this Halloween with some great, under seen and forgotten horror films. Definitely check them out. I can’t wait to sit around with a group of friends and enjoy these films the way they ought to be. 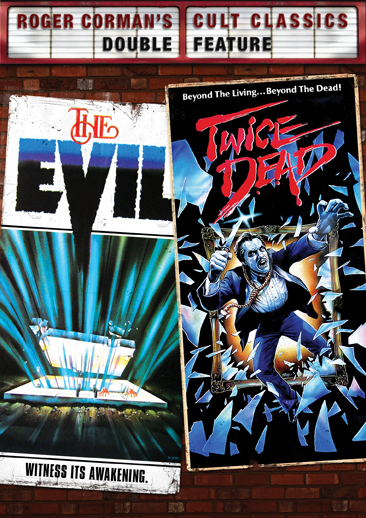 First time on DVD for both titles! Two chilling tales of suspense and survival in haunted houses!

The Evil: When a doctor rents a haunted house to use as a clinic, he and his associates are victimized by supernatural powers within.

Twice Dead: A family is thrilled to learn they have inherited the old mansion of the deranged, stage actor. They arrive to discover that the mansion has turned into a playground for a local street gang and is haunted by a ghost.