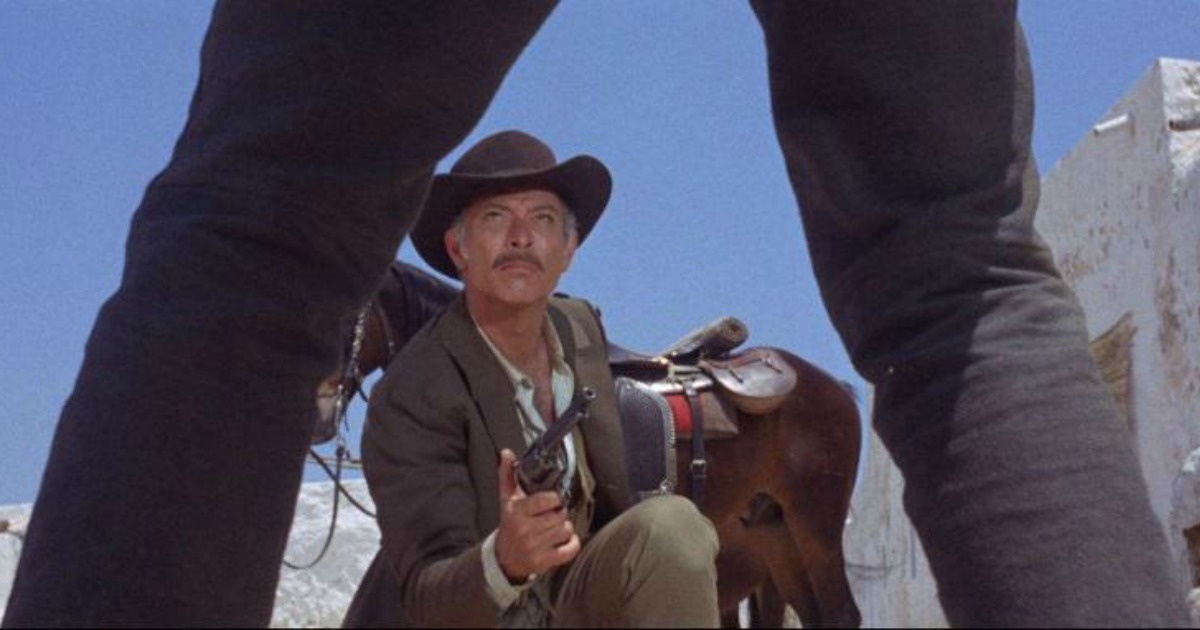 Day of Anger (“I giorni dell’ira”) opens in the town of Clifton, Arizona, seemingly typical of the wild West, but with a few more rich people living within its confines. We center on Scott (Giuliano Gemma) a good natured and naive soul who lives in town, and is the butt of all the rich people who control the daily comings and goings. He’s pulling a cart that takes the spittoon leftovers and gets rid of them at the barn that he lives in. As he’s walking along, we see his kindness while he walks through town. Such as protecting the town drunk who is playing with the saloon’s empty bottles when the owner comes out ready to shoot the man over it.

Scott is continuously abused, talked down and is straight up beaten up by all the upper crust of the town. And the moment we see Lee Can Cleef’s character ride into town, we know Scott’s life will forever be changed. Frank Talby (Lee Van Cleef) comes and Scott is the first to greet him. Asking him where a good place to stay and a stable for his horse, Scott helps him and is offered a dollar for his service. This of course is a big deal and Scott goes to meet up with Frank at the saloon afterward, where he’s greeted with hostility by the owner Abel Murray, Talby insists he stay and have a drink with him. When other bar patrons try to force Scott out, Talby dispatches them pretty quickly with his revolver He’s a gunfighter in an era where they have been slowly weeded out of existence.

He’s tried for the murder of one of the patrons of the bar that was bullying Scott Mary (Talby even insisted on Scott taking a last name), he’s let go and leaves the town. Scott is assaulted by the higher ups, especially by Abel Murray and the judge himself Cutchell, while the town sheriff just looks on and tells Scott he should leave and never come back. Scott catches up with Talby and finds out he’s going after Wild Jack (Al Mulock), who owes him $50,000. Scott just wants to become a gunfighter like Talby, and reluctantly, especially after Scott saves Talby’s life against Wild Jack’s cohorts, takes Scott under his wing.

Seeing this for the first time, I don’t want to really delve into every plot point, because I’m all about the surprise of the film unfolding before you. The gunfights are awesome, some are quick and to the point and others are huge battles with a high body count. Like Death Rides a Horse (another fantastic Van Cleef performance), the partnership must devolve after the town has been taken over by Talby and it’s figured out that Scott has become the quicker draw of the two. It’s a simple story, and with a hint of a familial bond within the plot (at least to me, that is), it’s no wonder this film has stood the test of time, and is on Quentin Tarantino’s top 20 spaghetti westerns of all time (number 7).

Lee Van Cleef once again brings his A-game to a film, a spaghetti western no less, and is electric throughout his performance. At times charming, at other times cool and collected and then menacing with a stare that tells you that if you can’t draw as fast as him, you’ll be needing a sizing for a coffin soon enough. Giuliano Gemma is also fantastic as Scott, who goes through a transformation throughout the film. At first naive, then powerful with his own gunfighter insinct, then angry and bitter and finally a hero, he shows humility and has a presence that helped him throughout his career. And like all good spaghetti westerns, we have a cast of fantastic faces from around Europe, such as Andrea Bosic, Lukas Ammann, Walter Rilla, Ennio Balbo among others. The soundtrack by Riz Ortlani is amazing, making me wish I had the vinyl right now so I could listen to it and think of all the gunfights I’d probably lose in. And directed by Tonino Valerii, a name that isn’t uttered as much within the Italian genre filmmakers, he does a great job of keeping the pace and storyline weaving, and with his work to come, this being his second film is a great accomplishment.

Day of Anger comes to Blu-ray thanks to the fine folks over at Arrow Video USA, one of their first wave of releases for the home video market here in the States. Please buy this release and show that we want their fantastic films over on stateside without the use of a multi-region Blu-ray player (which if you’re able to, you should buy anyway). The jam packed this release with an eclectic grouping of extras. You get two cuts of the film, the long Italian version in either the Italian language or the English dub (I watched with the English dub, and before anyone says this was lazy, go for the original language, just remember that most of the time, Italians filmed without sound and would have to do sound and dubbing later on in whatever language they were selling to), the shorter international version (which takes a whopping 30 minutes out of it), a few interviews, one with director Valerii from 2008 conducted by Italian cinema expert Roberto Curti, one with screenwriter Ernesto Castaldi which is cool because you get a bit of background on the Valerii 1973 film My Name is Nobody, an iconic film in another way) and an interview with Roberto Curti himself, discussing Valerii’s work especially in westerns.

Somehow in my years of adoration for Lee Van Cleef and Spaghetti Westerns in general, I missed out on the Day of Anger train. Not sure why this occurred, but it did and over the years I would hear from friends and colleagues of mine that it was a western that was a can’t miss. I’m happy to say that Day of Anger not only met those expectations, but shot them 6 times in row. Now wounded, my expectation was not given a chance to come back and was shot dead. 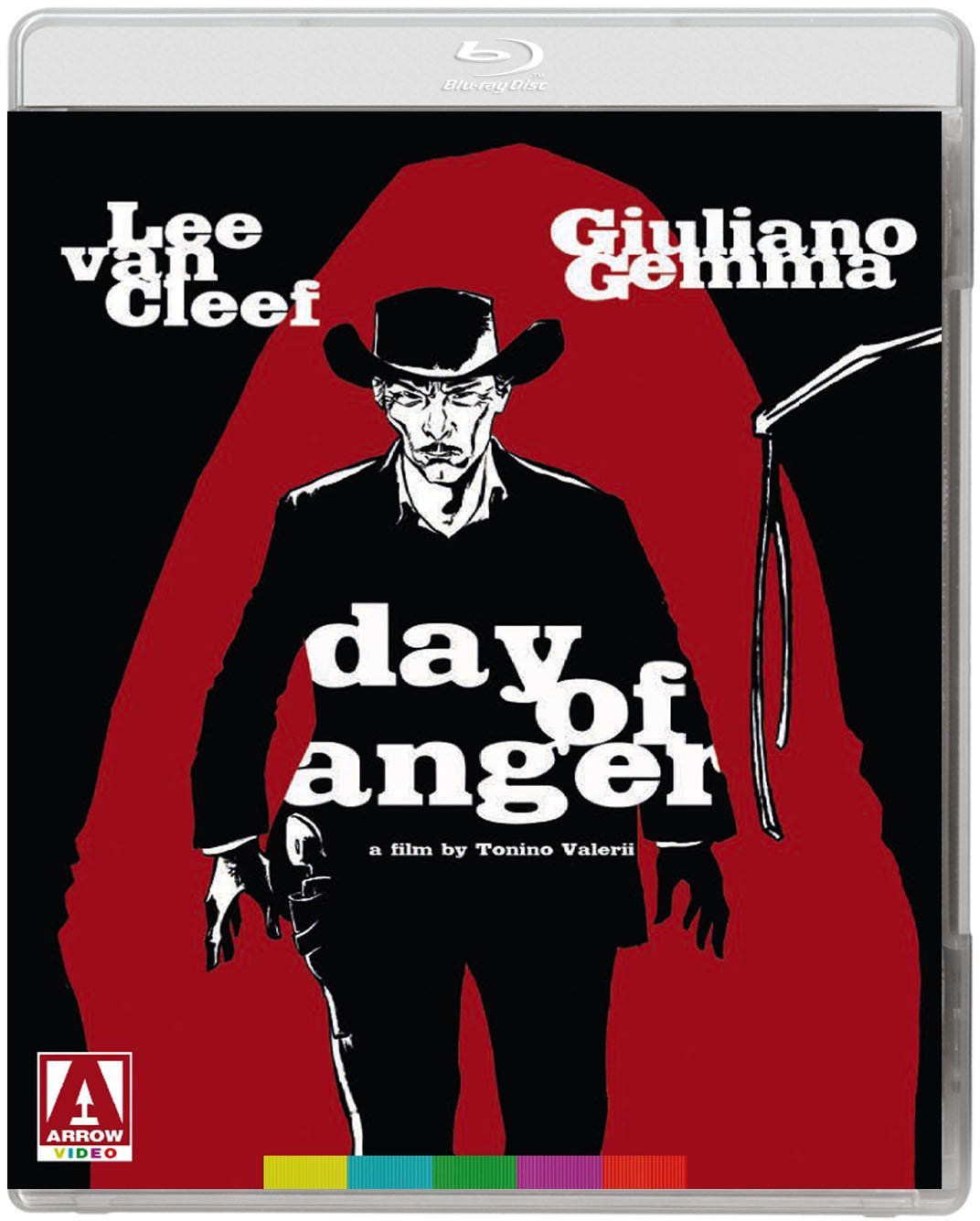