Vittorio De Sica, director of Bicycle Thieves (Ladri di biciclette), was a leading force in the neorealist movement in Italy. It’s no wonder that this 1948 film is the one people point to as the perfect example in the genre. A crowning achievement, not only in this particular genre but in film in general, De Sica’s film won an honorary Oscar in 1950 and was listed in many ‘best of’ lists, especially Sight & Sound’s poll for greatest film of all time by 1952, 4 years after it’s release. Since then it’s been regarded as one of the best films of all time and for good reason. It is a story that still resonates, even in today’s world.

Antonio (Lamberto Maggiorani) is a husband and a father who is desperate for a job. He goes to the local job club and as luck would have it, he gets an offer. There’s a small catch though: he needs a bicycle, which he doesn’t have the money for. He lies and says he has a bike and rushes home, worrying as to what he’s going to do. His wife Maria (Lianella Carell) pitches in the last bedsheets to bring to a pawn shop to get the money for a working bicycle. This poor family, giving whatever they have so Antonio can have a bike for his job is an amazing depiction of a family that throughout it all, is still being as hopeful as they can be, even when the world is looking grim. And then something tragic happens.

Not even halfway through his first day of the job, Antonio’s bike is stolen right from under him and no matter how hard and fast he runs, a thief on wheels will always be faster. The rest of the film has Antonio and his son Bruno (Enzo Staiola) going through the seedy streets of Rome, searching for their ticket out of poverty. Sadly one has to meet dodgy individuals who are really on there to help themselves and seeing post-war Rome is something of a scary revelation. Sifting through the grime of brothels and markets, life is an endless battle and one that De Sica doesn’t hold back from showing the audience.

This is what life was really like there and instead of presenting a washed over piece of fluff, De Sica and partner/screenwriter Cesare Zavattini don’t hold back and in turn make sure to grab the audience and keep our eyes glued to the sadness that is around at every turn. And as an audience, we look at Antonio’s son Bruno as our surrogate, the one we’re guided by through the trials that is going on with his family. We feel for him when we see his reactions to what his father is going through. A hardworking man who is at the Devil’s door, so to speak, and it is heartbreaking up until and including that final reel which will devastate you.

De Sica takes non-professional actors and uses on site location to give the Italian film going audience what they were living, where they were eating, what establishments they shopped at and gave it a reality that most films of that time didn’t bother to achieve. It’s not intrusive and is almost as if a documentarian is capturing these true moments of life in the wild, never interfering but instead just letting life play along in front of him. It’s a wonderful way to tell a story, and thankfully filmmakers in this neo-realism movement weren’t afraid to get their hands dirty and sometimes shock people with the truth about life and how plenty of them were living with the worries of how they were going to eat the next day.

Bicycle Thieves is a film, when I originally watched it over 12 years ago, didn’t resonate with me much. Italian neo-realism didn’t hit me where it was attempting to and, like French New Wave soon after, wasn’t connecting with me. A few years later, I watched it again and something snapped in my brain. I watched the film with brand new eyes and saw what De Sica was going for with this touching tale of a man and what was on the line for him. It wasn’t that I had a son (still not a father) or got married, but when I went to live on my own, I understood what it was like to scrape on by and take any job one could get, especially when times were tough.

Not to say you need to have such hardships to truly appreciate this film. A film with a son or daughter being senselessly murdered will still resonate with me because as a person you can’t help but feel empathy for the parents or whoever else is involved. But with a bit more of an outlook in life, one can see things in a film that at one point can just be an afterthought. Thankfully, not only did Criterion show me the way originally when they put it out but now Arrow Films has given a beautiful home to one of the greats in cinema. The image is amazing, again showcasing Arrow’s talent for giving new life to foreign films. Being used to their horror output from the last few years (and being wowed by it), their new Arrow Academy line is yet again breathtaking work.

Italian Cinema expert Robert Gordon (author of BFI Modern Classics Bicycle Thieves) gives a wonderfully informative commentary, one that is quite engaging and gives tons of insight with the film making process and what life was like in Italy at this time. We then get two great hour long documentaries; one about Cesare Zavattini and the other about De Sica. They are great portraits from Italian TV that give more insight into both careers and how they helped one another achieve their ideas to the screen. We also get the original trailer, a new essay on the film by writer and film historian Michael Brooke, Cesare Zavattini’s original essay Some Ideas on the Cinema and they’ve yet again given us an original piece of artwork to be the cover and three other poster designs, just in case you get a bit bored with that one. It’s a signature of theirs that I truly love.

Arrow Films has yet again picked a perfect film for their Arrow Academy line, which is shaping up to be an exciting film collection all its own. Great releases for great films is something you’d hope for from every company, and luckily we haven’t had any worry with Arrow at all. Import this as soon as you can, especially since Criterion hasn’t put out their very own Blu-ray edition yet. A depiction of such sadness that will resonate with you long after, De Sica’s Bicycle Thieves is indeed one of the best films to grace the silver screen. 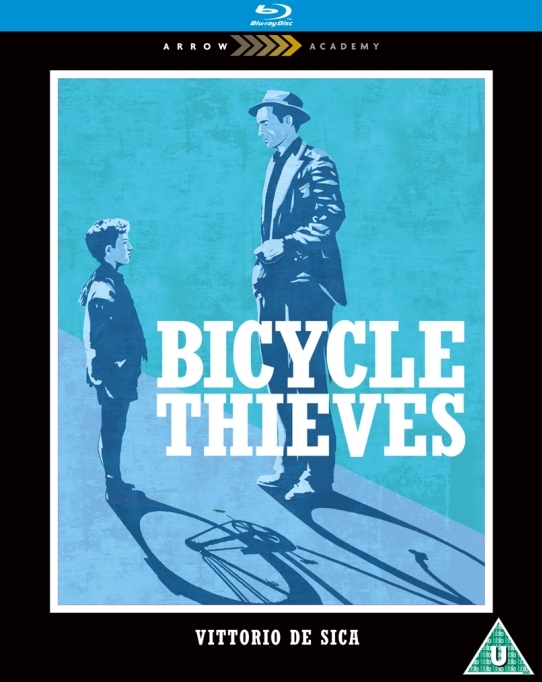