Sometimes, cinematic quality can be boiled down to relatively simple mathematics.   A certain actor working with a certain director on a certain type of project often equals the same outcome.   David Fincher, Brad Pitt, and a film about obsession/death often equals something great (Fight Club, Benjamin Button, Se7en) for example.

Then there is something so out there, that from the very sound of it, it makes you want to see it.   That’s exactly what I felt going into my first viewing of the newly released Shout Factory   Roger Corman Cult Classics edition of Not Of This Earth.

This film gives you Traci Lords, nudity, vampire-style aliens and more nudity, all wrapped in a schlocky package directed by Jim Wynorski.

Oh, and did I mention there was a boat load of nudity in this film? If not, you really won’t be able to miss it, because it’s pretty much the only reason to put this in your DVD player.

The film, a remake of Roger Corman’s 1957 film of the same name, follows a nurse, Nadine Story (yes, her real name) who is hired by a weird alien/vampire, played oh so creepy by Arthur Roberts, to keep him alive while he’s here on Earth.   He’s on the hunt for blood to feed his race, but when Nadine begins to look into who or what her employer is, things get all the weirder.

Having now gone through most of the Roger Corman Cult Classics releases, I can say that this is one of the weirder additions to that collection.   And not in a charming or truly interesting way.

The film stars Traci Lords, and was her first major film after starring in various adult films, all underage. She’s not asked to really show any sort of acting chops, but honestly, she’s utterly compelling.   There is something about the way she delivers these dreadful one liners, like a certain interchange between her and her policeman main squeeze, that makes the film far more of a comedy.   If this had featured a more experienced actress, I don’t think the film would have had the same sense of B-movie momentum in its dialogue, that saves many of these rather uninteresting set pieces.

Arthur Roberts is great here as the lead baddie, and is as stone faced and clinically cold as he needs to be.   There is a void of emotion here, and it’s that very man.   Mr. Johnson is a creepy man, and Roberts is the physical manifestation of that adjective/noun combination.   Rounding out the cast are Lenny Juliano and Roger Lodge as Jeremy and Harry respectively, and these two definitely add a bit of B-movie charm to the so-bad-it’s-good dialogue.

That said, the film itself isn’t truly all that compelling.

Not Of This Earth is a fine example of a B-movie without any sense of true B-movie chops.   Yes, it has an exploitative narrative that asks it’s female characters to get naked more than act, but the film is completely empty of any sense of narrative momentum, or any real moments that have you jumping out of your seat, or laughing to the floor.

Also, and while it’s not fair to ask one of these films to be something that it’s not, when we have seen films try to be something more than just a B-level film, I’m thinking of Death Race 2000, it’s hard to get truly into a film that is only as superficial as the things its putting on screen.   It’s empty of any sense of narrative weight, and also any sense of true entertaining schlock.   There is something about films like Deathrace or Battle Truck that are so over the top that you can’t help but be entertained.   Here however, if you give it a chance, you won’t be sorry, but you also won’t be all that rewarded.

As far as a DVD release goes, the release is serviceable.   The new transfer really has its moments here, looking like one of the better transfers from a 1980s B-movie that I’ve seen in a while.   It’s not perfect by any means, but it’s definitely a solid release from an era and genre that seems to be a tough one to update visually.   It’s not available on Blu-ray, and sadly it didn’t come with the original film (which would have really made this disc a must own), but it’s still a fine update. It’s not too clean, and yet not completely dirty. The sound however, isn’t great by any means.   It’s serviceable for sure, but the film’s score and overall sound are really underwhelming.

The series of releases have been a hit or miss special features wise, and this is definitely on the miss end a bit.   Featuring two commentaries, the film doesn’t necessarily short change you on special features, but it does only offer trailers and a relatively short interview with Lords, talking about her experience going from porn to this film, it definitely isn’t extensive.   You do get a commentary with Lords and Wynorski, as well as an older one with Wynorski where he goes a bit more tech-nerd on us all.   Toss in some photo galleries and stills, and you have a solid, if not a little underwhelming set of special features.

Overall, this is not the worst thing you could spend $20 on.   It’s a fun, if massively flawed, homage to a cult classic, that features comedic dialogue and some truly dreadful effects.   However, in a collection that includes classics like Galaxy Of Terror and Death Race 2000, you are better off going that route, than one adorned by Traci Lords and entitled Not Of This Earth.   Corman fans will flock to this, but for those of you wanting the best of the Corman collection, it’s better to leave this one to your Netflix queue. 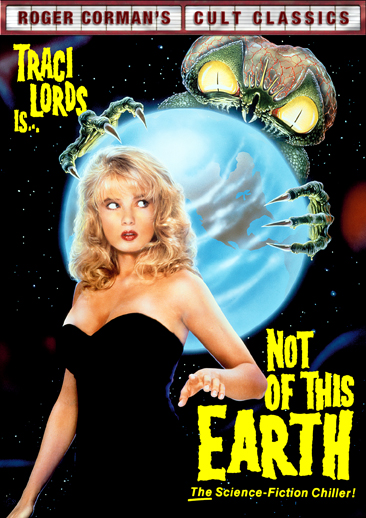 An alien race dying from radiation sends an emissary to Earth to find out if transfusions of human plasma might be a cure for their affliction. If the plan is a success, the creatures intend to launch a full scale invasion to harvest people for their blood.