Sometimes, expectations can either make, or ultimately break, a film’s chances.

Sitting down to watch Lisandro Alonso’s latest film, the 2008 critical darling that is Liverpool (currently out on DVD thanks to the geniuses over at Kino), expectations are damn near all one could go on.   Compared critically to films from the likes of Jean Renoir and John Ford, the film has become one of the most beloved foreign films, that relatively few people had heard of.

However, while some films (and I won’t name names here *cough* 127 Hours *cough*) haven’t quite been able to truly live up to its monumental, faint-inducing expectations, Liverpool, the latest visual piece of art from director Alonso, thankfully not only lives up to those expectations. It poetically puts them into submission, until it forces the viewer to tap with relative astonishment.

Liverpool has as a simplistic a narrative as it does a visual style, and like the said visual sensibility, it’s absolutely compelling. The film follows a sailor, who after spending most of his days out on the open waters, heads home to Tierra del Fuego.

The problem with most minimalist narratives, which this one, intentionally, is, is that they ultimately add up to nothing.  However, that is quite the opposite here.   The narrative web that Alonso spins here, while admittedly lacking in intricate or elaborate detail, is ultimately rewarding in the sheer person-to-person interaction placed on screen.   The depth of each character shown to the audience is, instead of being told as many films today do, literally shown.   Similar in style to something like a mix of Gus Van Sant’s appreciation for visual minimalism along with Ang Lee’s characterization (the opening of this film is almost beat for beat similar to the opening of Eat, Drink, Man, Woman), this film combines bare bones cinematic storytelling with equally sparse verbal language.

The script here, penned by Alonso and partner Salvador Roselli, is short on words, but thanks to Alsono’s tonally killer direction, the film ultimately shows us more about our characters, particularly the man at the film’s core, than a few well written sentences ever could. The first third of the film is nearly wordless, and is simply one of the most superb pieces of storytelling since something like the opening of There Will Be Blood.   While the comparison to that brilliant, best-of-the-decade film stops there, the use of language in both film’s opening is the closest thing to a masters class in visual storytelling this side of film school.   Both films tell much more about their leads in their opening shots than could ever be told in any word heavy script.   Truly inspired filmmaking.

That’s not saying that this film isn’t well acted, because it truly is.

While not much verbally is asked of the actors here, the cast, including the likes of Juan Fernandez and Nieves Cabrera, are from top to bottom on point.   Fernandez more or less carries the film, and gives a stunning, nearly wordless performance as the film’s lead, even in the face of brief moments where the visual characterization becomes quite lazy (cliché strip club scene, I’m looking squarely in your pointless little face).

However, it’s not the performances that truly keep the viewers attention, as it’s not the performances that ultimately connect the viewer to any sort of emotional stream.   Alonso is such a stately and subtle filmmaker, that by simply leaving the camera on our lead, even as he does seemingly uninteresting things (waking up in a boat, looking out the boat window, ect.), we begin to know more and more about the character.   It takes a truly gifted visual storyteller to pull of what Alonso does here.

And it’s not just a point and shoot film either.   Liverpool is both narratively, and visually, arresting.

The film evokes this overwhelming sense of isolation and over melancholy that comes across in this stunningly austere picture.   It’s a overtly grey, giving the various moments of color this dark, dingy sense of depth.   The lingering of a pair of red barrels lying against a backdrop of grey mud and even darker hills.   The green hue of a hallway closed off by a door with an earth toned portrait of Jesus.   Moments like this visually engross the viewer, in a world both minimalist, and yet filled to the brim with emotion and visually striking style.

As black is both a color, and the manifestation of the lack of color, Liverpool is a stylish beast of visual filmmaking, that also happens to lack any overt sense of style.   Such a dichotomy breeds only the best films.   Such a dichotomy, one that puts the story above anything and everything else, is the breeding ground for the best that cinema has to offer.   If you give Liverpool a shot, you won’t be disappointed.   A film in the vein of something like the upcoming Criterion release, Fish Tank, Liverpool may lack the ‘kitchen-sink’ drama style of that film, but what they both have in common is this ability to create true characters at their cores.   Not simply a manifestation of traits.   But the fleshing out of real humans.   Simply put, Liverpool, while it isn’t for everyone, is an absolute must see.

As far as a DVD goes, this release is pretty limited.   The disc itself comes with a stills gallery, but the real winner here is a short, but great, interview printed as the booklet on the inside of the case.   Other than that, you are looking at about the barest release a film could have.   And it’s a shame.   This film deserves much, much more.   Still however, this is one that would fit perfectly at the top of your Netflix queue. 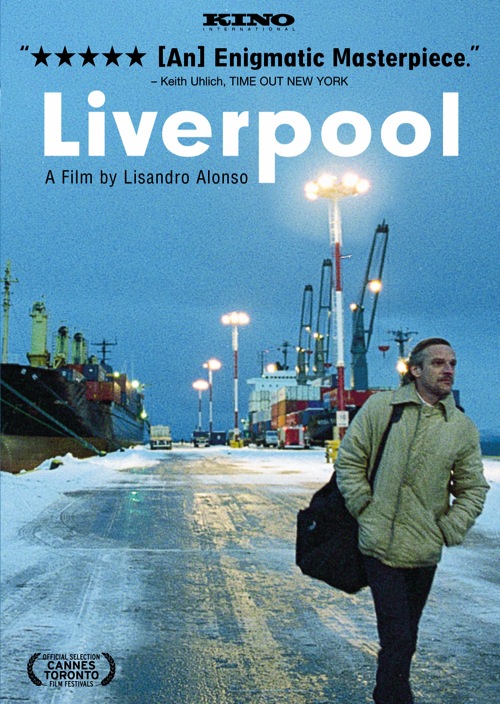 LIVERPOOL has thrust Argentine director Lisandro Alonso to the forefront of world cinema. Expanding the brooding mystery of his La Libertad (2001) and Los Muertos (Cannes Selection, 2004) into the realm of family drama, the film succeeds with a ‘stunning grace and total confidence.’ (LA Times).

While exploring Tierra del Fuego, Alonso met the stoic Juan FernÃ¡ndez, who worked clearing snow from the streets. Fascinated with his haunting personality, he built the story of LIVERPOOL around FernÃ¡ndez and his isolated town, casting the non-professional in the lead role of Farrel. As the movie opens, he is employed on a massive cargo ship and requests shore leave to visit his sickly mother, who lives in a remote logging town in Tierra del Fuego. Farrel depends on booze and the unkindness of strangers to make the grueling journey southward. Hinting at unspeakable tragedies beneath the surface of Farrel’s impassive face, Alonso sculpts a ‘bold, successful attempt at a film narrative in which images are everything and words are few.’ (LA Times)

With luminous cinematography ‘in the manner of John Ford and Jean Renoir’ (Variety), LIVERPOOL exhibits a striking new cinematic style that is still rooted in the old masters. It’s a rich, mesmerizing work of art.