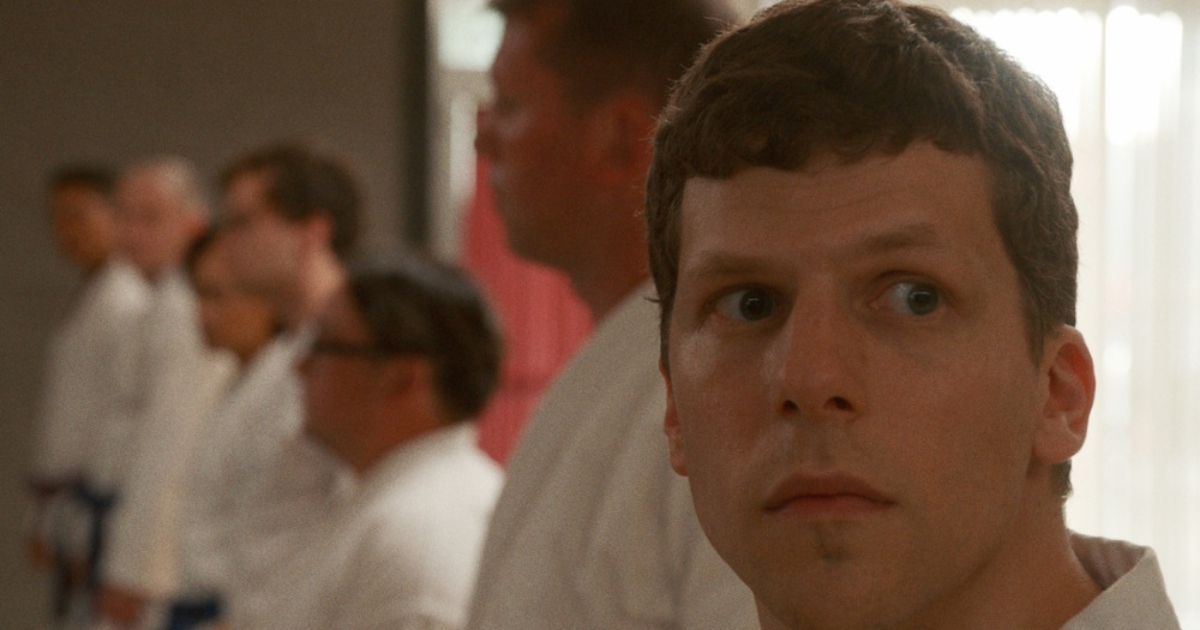 One of the most anticipated films of this year’s Fantasia International Film Festival is also one that has just debuted theatrical south of the Canadian border.

Entitled The Art Of Self-Defense, writer/director Riley Stearns returns with quiet, brutal treatise on toxic masculinty that sees Jesse Eisenberg star as Casey Davies, the type of twerpy beta male that’s become something of a meme among the very worst of online trolls looking to express their masculinity through violence and break-time push up sessions. He listens to “adult contemporary” music, wants to vacation in France and treats his pet like his best friend, or what amounts to some kind of satanic trinity of feminine weakness that makes him the ire of bullies at work and ultimately the victim of a beating at the hands of a mysterious bicycle gang.

After this, however, dynamics shift. Casey, after applying to buy a gun, enters a karate studio led by a sensei (an incredible Alessandro Nivola) with a strange training style. Teaching your run-of-the-mill day classes to students both young and old, sensei also hosts “night classes” that are for both the more skilled, and more “adventurous” members of his coven. After convincing Casey to take up German and heavy metal music, sensei invites him to his night classes, and Casey’s life forever changes, in ways one can’t even begin to imagine.

Based on all of that, one would imagine that through a sense of dry humor and with a good pinch of satire The Art Of Self-Defense would be the type of masculinity-bashing screed that a Trump America desperately needs. However, those heights are never quite hit.

The performances here are the film’s greatest attribute. Both Nivola and Eisenberg are absolutely incredible, particularly when they’re on screen together. Nivola’s bullshit machismo is so clearly a put on, right down to the vague, whisper-like voice he uses almost entirely throughout the film. Everything about the character, whose real first name is revealed in the film’s off-kilter finale, reads as false yet after a moment of crisis it’s entirely believable that this con artist would be preaching the type of gospel that would take Eisenberg’s Casey by the balls. Eisenberg feels perfect in this role, the type of character that he’s made a career in playing. It’s as if Mark Zuckerberg got stuck in a call center, and for that one concept alone it’s almost thrilling to see him take this character on completely. Imogen Poots is also quite good as a fellow instructor at the dojo, with her character’s progression playing as the film’s strongest thematic work.

It’s just too bad she’s not in it more. Despite these solid performances, The Art Of Self-Defense is much too thin, much too broad to make much of an impact either emotionally or intellectually. The direction is admirable, with its muted photography and deadpan framing that matches well with its equally dry humor, but there’s little teeth here with regards to the actual satire that’s at the core of the film. Everything Stearns’ script has to say about masculinity and gender dynamics is superficial and rudimentary, with only a few actual chuckles amidst a film that’s rather limp emotionally. With a film this dry, the humor becomes endlessly important and opposite such brutal violence Self-Defense plays as something more resembling the miserablist dramas of Haneke or von Trier just ripped of any real insight.

At just a pinch over 100 minutes and with a trio of good-to-great performances, The Art Of Self-Defense isn’t something to be entirely ignored, and Stearns is too talented a crafter of images to make a film that’s not at least worth viewing. However, what is seen here is a film that’s neither as smart as it thinks it is nor as provocative. It’s just a sort of slog.