There are some films in the overall world of cinema that should never be given sequels.

To the unbeknownst film goer, the film Alfred Hitchcock classic Psycho would happen to be one of those films.   Then you take a trip on over to IMDB, and you discover that, gasp, the film not only spawned a dreadful (if respectably gutsy) remake from filmmaker Gus Van Sant, but also three subsequent sequels.

Well, that very franchise, and yes, that is what the Psycho name is, has become the subject of a brand new documentary, set to be released on DVD by the great people over at Shout Factory, entitled The Psycho Legacy.

And while the film may be a bit too romantic and loving for those looking for a more critical documentary, fans of the film(s) or fans of the genre as a whole will absolutely flip for this introspective, and rather extensive look at the legacy left by the titular cinematic legend, Psycho, and it’s under-discussed sequels.

Psycho Legacy as a whole is quite a niche documentary.   If you didn’t dig the first Psycho film (which if you didn’t, I really don’t know why you are reading this, or how you are still alive), or haven’t seen any of its sequels, this may not be the film for you.   However, if you are a fan of the first film, and have or haven’t seen its sequels, this may be the romantic look back at a franchise you love, or eye opening documentary into a franchise you never knew actually was a franchise, that you’ve been waiting for.

Best described as a feature length look at the Psycho franchise in the vein of the documentaries that Shout released as part of their Roger Corman Collection discs, the film features interviews with everyone ranging from Robert Loggia, Olivia Hussey, Henry Thomas, Mick Garris and all around horror badass/Hatchet director Adam Green, all discussing what working on their respective Psycho films was like, giving us a first eye look at what the production of these films was like, or what these films have meant to their careers, no matter their relationship to the film.

However, the strongest aspect of this documentary, or at least its most interesting, is the overarching discussion of Anthony Perkins and how he truly created this character, which is now a legend, and also happened to direct a Psycho film in the meantime.   This is an absolute love letter to Perkins, and even features some archival footage of the man.   That said, it’s also a great look at the character Perkins made famous, Norman Bates.

The great thing about the Psycho films, which is touched on here, is the use of Norman Bates, and what the character signifies as a horror villain and icon.   While most horror baddies hide behind masks or in the shadows, Bates was a villain whose face was tacticle.   He was a touchable, seeable villain, who you could easily mistake for any Wall Street broker or college professor.   He could be at a party, and you wouldn’t know any different.

Then you look at Perkins himself, described as a loving, open and warm person, and you realize that this man was far more than just a fantastic actor.   He changed the lives of those who he came in touch with, and while that is cliché, the discussion of Perkins and his relationship with the film and filmmakers is something I didn’t quite know about.

While that in and of itself is a romantic and kind of melodramatic look at the films, when the documentary goes into the breakdowns of each of the films, it works masterfully.   They are often esoteric discussions about random happenings on the film’s sets, but for those who get off on that sense of being behind the curtain, this is must own stuff.   It’s your run of the mill, feature length making of documentary, but as a retrospective, I think it works wonders.   The film goes through all four of the Psycho films, and is really the best companion piece to a set of the four films that a franchise fan could really get.

Now, the film in and of itself is a rather solid 90 minutes long, but that pales in comparison to the film’s special features, which clock in at just around three hours long.

For those of you who may not get enough of the documentary itself, the 2 disc DVD set comes with a collection of deleted and extended scenes, which are simply more of the same, which with regards to this film, means a lot of interesting content.   Then there is a tour of the Bates Motel, which for fans of the franchise is an absolute joy.   You get a great look into the hotel which became a horror icon, and still to this day is one of the most haunting sets you’ll ever see.   There is also a dual set of documentaries regarding the making of Psycho II, which play as an interesting companion piece to this inherent companion piece, and should only feed the appetite of any Psycho fan.

However, there are a few features that are must owns.   Along with a Psycho retrospective panel, which is a fantastic watch, it’s the panel discussion with Anthony Perkins that is the true cornerstone of this release.   It’s a fantastic discussion, and with such a focus on Perkins in the actual documentary, this is just the special feature I was looking forward to watching when the film ended.

Overall, this won’t do much to change your opinion of the franchise, but if you are a fan, this is an absolute must watch.   It’s a fun, insightful, and ultimately interesting retrospective of not only the first, classic film, but of its following sequels, which haven’t found as much of a footing in the history of film.   Hopefully this will change that. 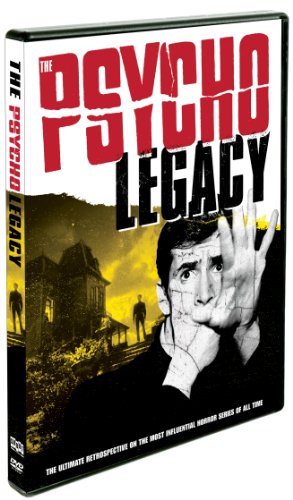 The Ultimate Retrospective on the Most Influential Horror Series of All Time!

In 1960, Director Alfred Hitchcock unleashed the mother-loving, murderous Norman Bates (Anthony Perkins) onto screens in Psycho and scared audiences senseless. With its shocking shower scene and unheard-of-at-the-time twist ending, it single-handedly changed the horror genre forever. Psycho was so successful that it spawned three sequels, one remake, one TV series pilot, countless imitators and is now considered the ‘grandfather of modern horror’. The Psycho Legacy is the first documentary to unravel the screenwriting, casting and directing of all of the Psycho films and reveals several surprises and insights that every fan of this classic franchise will want to know.

Includes never-before-seen interview footage with Anthony Perkins and ultra rare interviews with stars of the sequels.