Now, not many people would think that I would be a huge basketball fanatic, but I am. I love this game! I believe there is more drama in one basketball game then there is in any film by David Fincher. The conflict between to teams, the balance of power shifting as the minutes tick off the clock and the ballet of athletes dancing from end to end of the court for a single basketball. Such drama can be found when filmmakers document this sport in the new film from HBO Films, Magic & Bird: A Courtship of Rivals.

This is the story of two very similar men. Two men with the exact same type of game, approach to the game and competition and reverence to the game as did Earvin ‘Magic’ Johnson and Larry Bird. Their similarities are plenty and the differences, surprisingly, were very few. This documentary examines each athlete’s rise to stardom, conquest for greatness and eventual downfall, only to rise again as if gracefully leaping for a rebound. But sooner or later these shooting stars will someday cross paths to develop a rivalry and an unexpected friendship.

The film also chronicles the issue of race in their careers. One of the obvious differences between these two players is race. But interestingly enough, both players never allowed that to affect their game. Even though other players, the country and network sponsors wanted to play the race card. This is important because not only did the change basketball for the better but the also changed how athletes were marketed to a general audience. Both seen as hard working, mid-western men, both were used in marketing campaigns highlighting their rivalry and not their obvious racial differences.

Magic & Bird: A Courtship of Rivals is an excellent documentary for any sports fan. To see a first hand account of the rise and fall of two basketball greats and how their lives intersected and how they brought together so many is absolutely fascinating. Their bond would shape the modern NBA and saved the league from an uncertain future from low ratings, low attendance and low revenue. The game wouldn’t be the same without both of these legends. 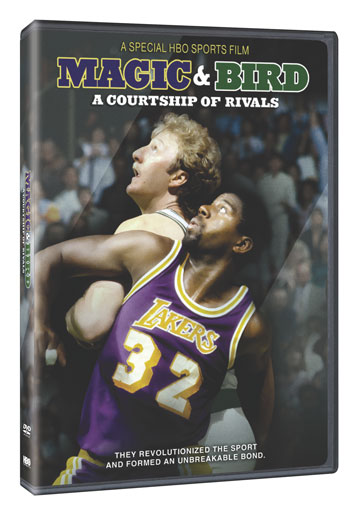 For years, the passion they shared for winning made Earvin “Magic” Johnson and Larry Bird the most bitter of rivals. It also made theirs the most compelling rivalry in sports, driving the NBA to new heights of popularity in the 1980’s. This all-new documentary tells the riveting story of two superstars who couldn’t have been more different — until they forged an unlikely friendship from the superheated rivalry that had always kept them apart.