It’s brought up many times in the special features on this disc, and it’s true – you can’t talk about film noir without talking about  Double Indemnity. Not only does it bear many of its staples, from the light trickling in through venetian blinds to the hard-boiled narration to the femme fatale, it practically defined the genre right out of the gate. But in 1944, film noir didn’t exist, and  Double Indemnity was just another crime picture. And  that’s what makes it truly exceptional.

The film was adapted by director Billy Wilder and Raymond Chandler from James M. Cain’s 1935 serial story, and this is pure Cain all the way – the seedy emotions running under working-class Los Angeles. Insurance salesman Walter Neff (Fred MacMurray) is a pretty average guy, all things told, and when he journeys to Glendale (Double Indemnity  is gleefully specific in its Los Angeles geography) to sign a client for another round of automobile coverage, he hardly expected to run into a practically-naked housewife with designs for murder. Phyllis Dietrichson, despite bearing a name so innocent that your grandmother would gladly have her over for tea upon introduction, is one in but a long line of deliciously sinful roles for Barbara Stanwyck, an actress of considerable talent who nevertheless possessed a natural reserve that is well-suited here. Phyllis never directly states her intentions to kill her husband, and in fact it’s Walter who plans the entire scheme, but her subtle manipulations are evident immediately. It’s almost as though she knew Walter was coming, and knew precisely what (not) to wear in greeting him. 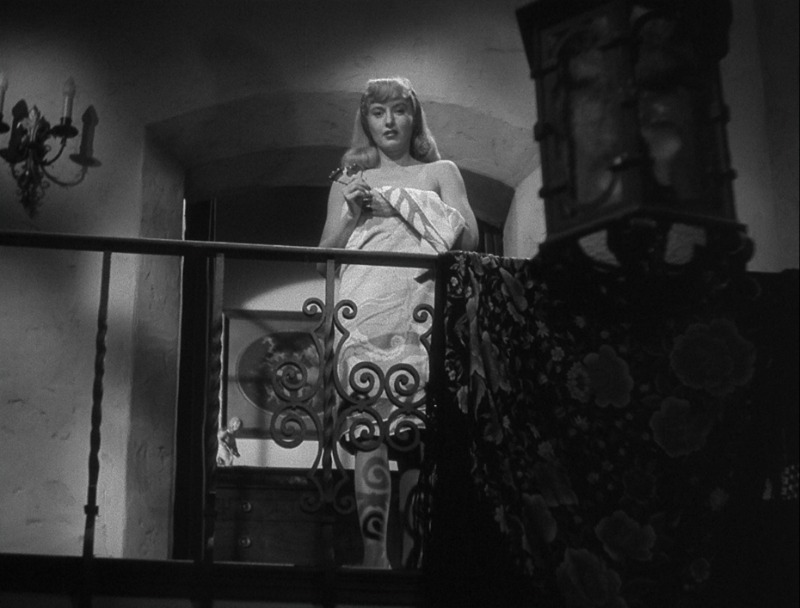 I’ve seen Double Indemnity a few times now, but it was interesting to reconsider it under a certain lens with which the new Masters of Cinema disc views it – as documentary. Indeed, Billy Wilder was intent on making a very realistic portrait of contemporary crime that, ironically, wasn’t even contemporary to its production date (the film is set in 1938 to avoid any concerns towards World War II). When we look back on the films noir of the classic era, they seem pointedly artificial, but the aim during the time was precisely the opposite. The clever dialogue was perhaps a little heightened, but as Nick Redman and Lem Dobbs point out in their excellent commentary, conversations was a much more developed art at this time. People sat down and spoke to each other with much greater frequency; they had time to hone their craft.

As for the visual elements – the venetian blind effect and so forth – that was just considered good filmmaking. Though it utilized sound stages,  as any production in the studio era would, interiors were built to replicate the actual spaces inside the houses and apartment buildings used for exterior shots. Even the artificial was somewhat real. And while perhaps some living outside of Los Angeles might not take to the way characters reference very specific crossroads and routes (which calls to mind  “The Californians”  these days), as Dobbs notes, it used to be considered good screenwriting to create a sense of space. Furthmore, at the time, Los Angeles still held a certain magical appeal to the larger public, and those frequent references would be enticing to anyone.

But regardless of what lens you use to view it,  Double Indemnity is just damn good drama. It was only Wilder’s third American film (fourth, all in), and his assertion over the material is masterful. He knows precisely how to play his talented cast, despite their disparate backgrounds. On the commentary track, Dobbs notes that Wilder could see what was really there inside each actor, not merely what they had been previously asked to do. MacMurray came from lightweight comedy, while Stanwyck and Edward G. Robinson (who plays the claims manager at the insurance company) made their name in the Pre-Code era, utilizing those personas here to wildly differing results. It’s as tense, thrilling, and morally corrupt today as it was the day it came out, and it really takes a fine touch for a filmmaker to work within the restrictive Production Code and still produce something that feels as depraved as this. On the commentary track, Lem Dobbs mentions that the picture’s all about sex without ever being terribly sexy – it’s more like sex you have and immediately regret. Can’t think of a finer description. 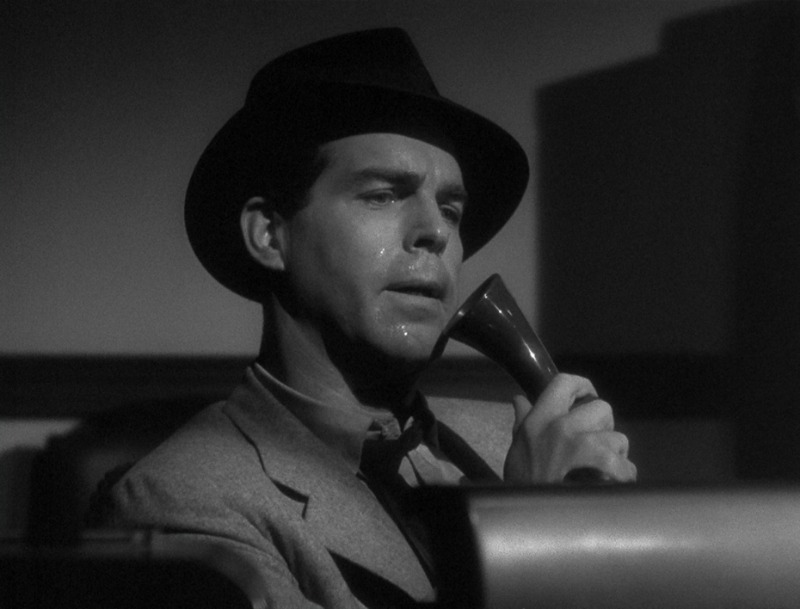 Despite being a major work,  Double Indemnity  has had a spotty history in the digital era. It was first issued as a barebones disc at the dawn of DVD, though that quickly went out of print. When I first went looking for it as a young cinephile in the early 2000s, it was not easy to come by; I ended up seeing it through my college library. Universal’s two-disc special edition in 2006 was a marked improvement, both in the bounty of special features and the quality of the transfer, never mind the sheer fact of its availability.

It’d be obvious to say neither hold a candle to the new (Region-B locked) Blu-ray edition from Eureka’s Masters of Cinema, but even that seems to be selling it short. Simply put, this is an astounding rendition of  Double Indemnity, and one of the best I’ve seen of a film from this era. The usual marks of greatness are there – a crisp, pristine image, steady grain levels, a genuine sense of depth, and tremendous contrast, but they really went above and beyond in the darker areas of the image. It’d be much easier to bury details in deep black shadows and exclaim “noir!”, and we probably would have liked it at that; instead, they bring everything  the image has to bear. Look at the scene in which Walter comes stumbling into his office to record his confession – it’s night, and there is barely any light coming into the room, but MoC doesn’t let any detail get buried. You can see everything in the room without ever losing the feeling of darkness. In pushing these elements more towards gray, rather than black, the film seems even more sordid than before; less striking, but more resonant. Needless to say, when the image does call for pure blacks or whites, MoC delivers with flying colors, so to speak. The screencaps on this article are provided by DVD Beaver, and even though I’ve compressed them, they’re still representative of the product.  Double Indemnity is presented in its original full-frame aspect ratio in 1080p.

MiklÃ³s RÃ³zsa’s score, which was at first lambasted by Paramount’s upper-level composers before a studio executive approached RÃ³zsa at a preview screening saying how much he liked it, soars on the disc’s audio track, which also does a fine job of replicating dialogue and incidental sound. I noticed a slight hiss from time to time underneath the dialogue, but then, it really wouldn’t feel like a classic film without it. 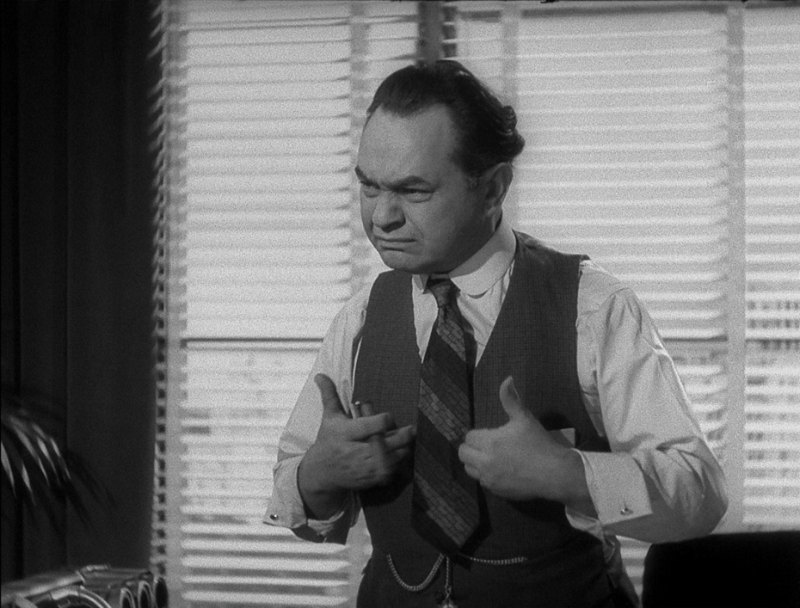 The special features are mostly replicated from Universal’s 2006 edition, but not without reason, as they are excellent. Dobbs and Redman’s commentary track is informative, but also surprisingly personal. Dobbs knew Wilder towards the end of the latter’s life, and he shares many recollections from this experience. If anything, the track is a little too weighted towards this, especially when Dobbs gets off track and starts telling Michael Powell stories, even though Powell had nothing to do with this film. Redman plays more of an interviewer’s role, but knows how to keep Dobbs focused in the right areas. “Shadows of Suspense” is a thirty-seven-minute making-of featurette, featuring interviews with noir experts Eddie Muller and Alain Silver, amongst such cinematic luminaries as William Friedkin, James Ellroy, and Caleb Deschanel. It spoils the movie quite a bit, so don’t come looking for background information first, but it makes for a solid viewing after the picture.

MoC’s new contribution is a 1945 radio adaptation of the film, with MacMurray and Stanwyck reprising their roles. It’s an interesting curiosity of abridgment – running only a half-hour, much is naturally cut – and it makes some curious changes to the text. For instance, Walter’s confession is relayed via typewriter rather than the film’s  dictaphone, which is not only obnoxious (the first few entries are accompanied with loud typewriter sounds), but given the format of radio, totally bizarre. And recasting Robinson’s role just underscores how vital he was to the picture. No one could really sell that “little man” business like him.

The real treasure looks to be the 36-page booklet. In it, you get a 1976 interview with Wilder, an interview from that same year with James M. Cain, a section on Chandler’s disdain for working within the Hollywood studio system, an extract from the screenplay depicting the excised “gas chamber ending,” notes on the restoration, and rare archival industry.

A great film gets its finest treatment on home video to date. If you’re able to play Region B discs, this is absolutely a must-own.

Order the Blu-ray from Amazon.co.uk