All right, dear readers, you and I have known each other for a few months now, so I feel like I can be honest – I’ve spent over a week thinking about Pier Paolo Pasolini’s  Pigsty, and I have nothing for you. Don’t get me wrong, I watched, and actually quite enjoyed, the movie. I understood the basic story. I latched onto some interesting thematic elements. But let’s not you and I pretend that I formed any sort of cohesive view of this dense, heavily allegorical work. Following two parallel stories – one in which a lone scavenger searches a ruined landscape for any trace of food before turning to cannibalism, the other concerning two bourgeois young lovers in conversation about relatively minute issues – Pasolini’s overall condemnation of the wealthy is pretty evident, along with his inquiry into the societal structures that keep the lower classes low. But there’s so much more in this film, from mergers to gangs to kingdoms to the duality of personas that to even attempt to take it in on one viewing – especially not fully knowing the politics of the time – is an exercise in futility.

But I never believed that one need fully understand something to find something interesting, intriguing, or entertaining about the work, and any film involving all these disparate elements (yes, the titular sty does come into play) can’t help but having at least one of these adjectives applied to it. Pasolini wasn’t only an intelligent filmmaker, but also a passionate one, and his zest for his ideas is as pervasive here as ever, so even when one cannot quite keep up with him, he’s still roping you in. In the bourgeois section, he casts some very charismatic performers, most notably the great Jean-Pierre Léaud (best known for playing Antoine Doinel for Francois Truffaut, later starring in  Masculin, féminin for Jean-Luc Godard). Léaud is one of those guys incapable on being uncinematic, so that all his directors really had to do was point the camera at him to achieve any desired effect. The cannibal section of the film is a little less reliant on performance, but the raw savagery on display (extending well beyond their dining options) is plenty to keep the curious viewer intrigued. 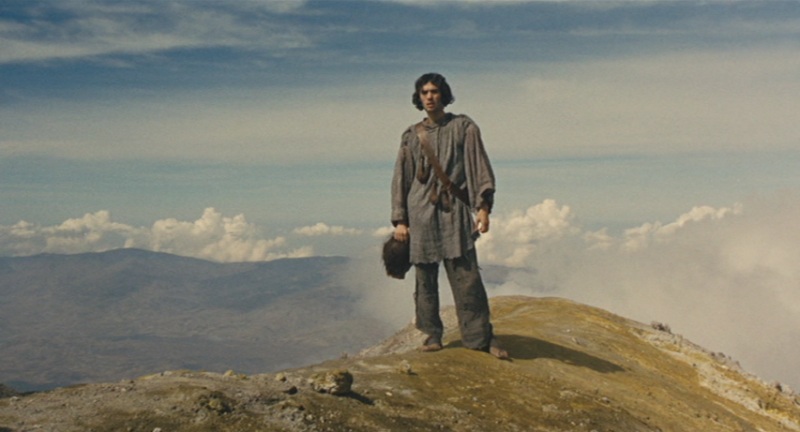 Speaking of “on display,” should you wish to jump into the pen, the new DVD edition from Masters of Cinema (region-locked for Region 2) is a fine place to go. This is much better than the other recently-released Pasolini title,  Hawks and Sparrows, looking much sharper, with better contrast and a more defined, film-like look. The color palette is limited in that late-60s/early-70s kind of way, but they come through nice and strong, with various objects looking very distinct. The image seems appropriately bright, and the film is presented in its original aspect ratio, 1.85:1. The screencaps (courtesy of DVD Beaver) nicely represent the image, though I’d say it’s even sharper than that.  The stereo soundtrack is similarly strong, with voices coming through clearly and appropriate ambient noise presented very well.

The only special features are a trailer and a booklet that includes a new essay, notes on the film by Pasolini, and an interview with the filmmaker, which go a long way towards elucidating some of the film’s more ambiguous themes. I’m sure some look sideways at the lack of video contents on the disc, but Masters of Cinema do such thorough, wonderful work with their booklets that they more than make up for the lack of other supplements, and there should is plenty here for interested parties to chew on. So to speak.

Order the DVD from Amazon UK