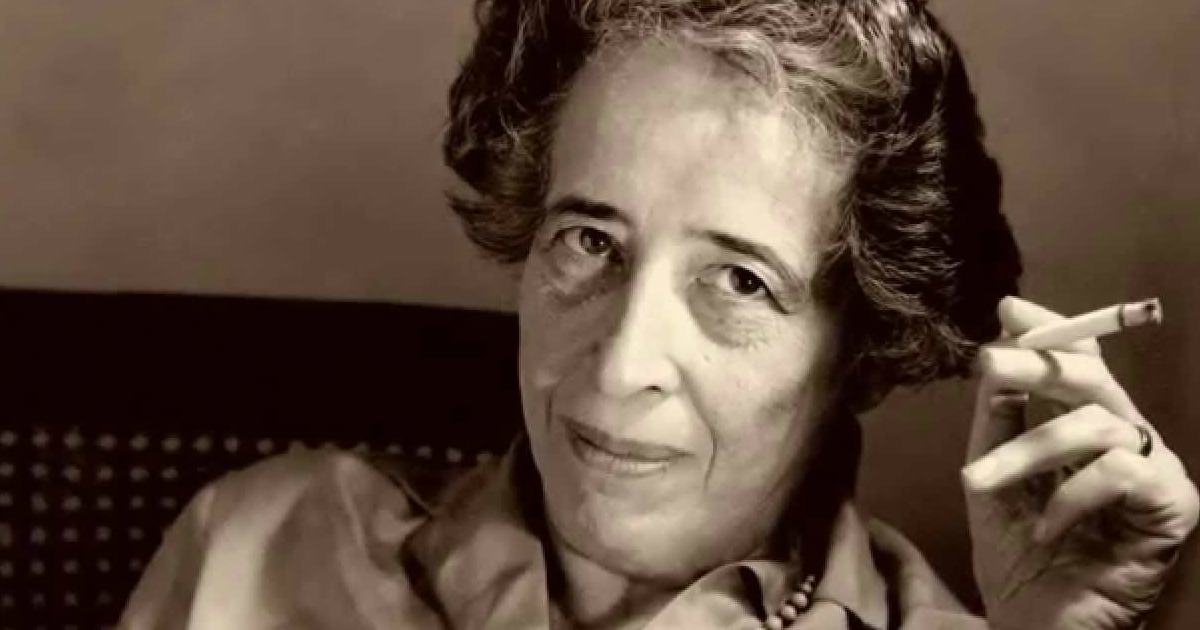 Trying to sum up the life, and even more so the work, of a philosopher and intellectual with the stature and import of one Hannah Arendt is a very tall order, particularly when attempting to do so in one feature length film. One of the most influential thinkers of her time, Arendt, a German of the Jewish faith, fled for New York in 1941, only to pen important pieces like The Human Condition and even more importantly, The Origins Of Totalitarianism. She’s also arguably best known for “coining” the phrase “the banality of evil,” her attempt to ostensibly explain how (in her seminal 1963 work Eichmann In Jerusalem) a man like Adolf Eichmann, a man so seemingly ordinary and utterly bland, could be behind some of the most disgusting atrocities ever committed by man. With that phrase now becoming something even more lifeless than even a standard cliche, Arendt’s work is at the center of a new documentary that hopes to bring new life and eyes to some of the most controversial philosophical musings of the 20th Century.

Director Ada Ushpiz goes the route of the similar (and far superior) Concerning Violence, ostensibly building her new film, Vita Activa: The Spirit of Hannah Arendt, around direct quotations from various writings of Arendt, ranging from her philosophical writings to musings she wrote privately about her life (and controversial romance with fellow philosopher Martin Heidegger). Primarily driven by this voice over, the film uses a great deal of archival materials, be it photos of her family or actual interview footage with Arendt, and intersperses new interview footage with friends and colleagues, making for a structurally sound, if not entirely engaging watch.

Actually, it’s a pinch more than “not entirely engaging.” It’s aggressively inert. While the above compared Concerning Violence is both a timely and utterly engrossing philosophical meditation in documentary form, Ushpiz’s film is a wonderfully crafted piece that is simply too long for what it is attempting to do. Instead of playing as a timeless recounting of the work of a philosopher whose writing is, to this day, of heavy import (just look at her discussion of totalitarianism and its roots in the displacement of mass populations, which couldn’t be more timely), there is a sterile quality to the film, finding it more akin to a well structured dissertation. Those with a deep interest in Arendt or 20th Century philosophy will find numerous nuggets to chew on, and those willing to combat the film intellectually will as well, but this is about as niche a documentary as they come.

That all being said, it is a superbly made document. Wonderfully composed editorially, and Ushpiz doesn’t avoid making direct comparisons to modern day when discussing Arendt’s writing. Giving the film a deep sense of urgency, these allusions are both much needed when dealing with a film this dense and this long (the two hour runtime feels like a lie, but alas, it’s true) and also wonderfully handled and assured. Yes, the film is a tough sit for those without much interest in philosophy, yet it’s an important one for a great number of reasons. Sure, it’s important to have a document of Arendt’s life and work, but even more so it’s important to critically look at her work as it relates to today’s society. Ushpiz allows Arendt herself to speak about her work through archival footage, but her critics also get some time to chime in, and it is within this back and forth that the film absolutely comes alive. The rhythm of the film may be tough to get connected to, but for those willing to have a conversation with this picture, there is a lot to draw from here.