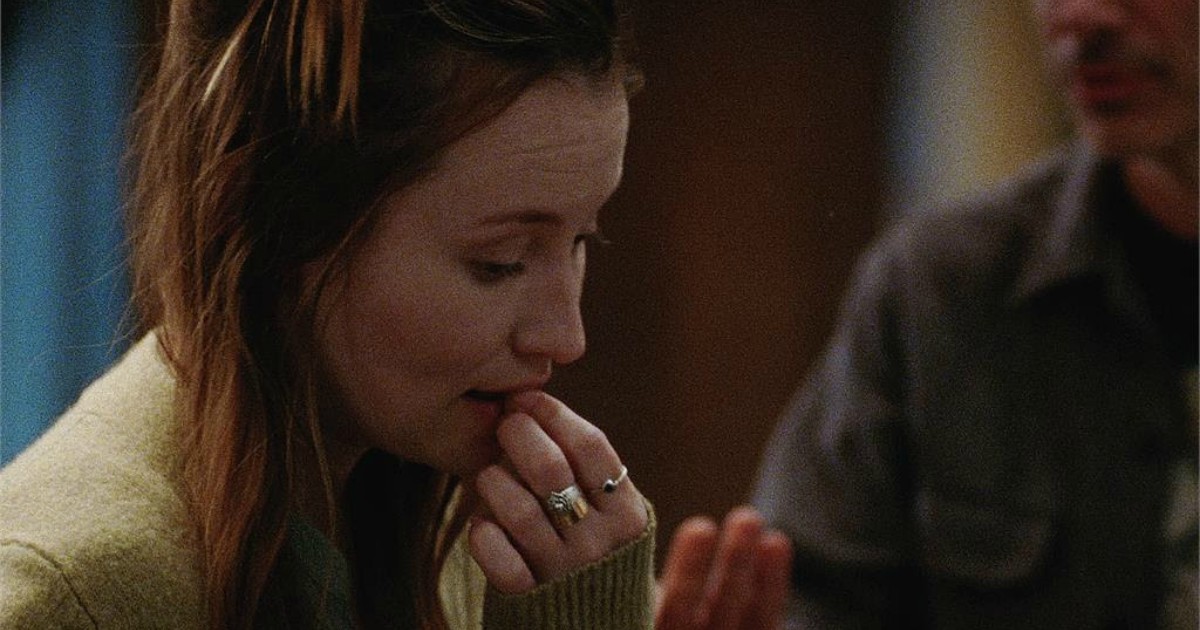 Usually, when a director with the art house credibility of an Alex Ross Perry teams up with a cast including names like Jason Schwartzman, Chloe Sevigny and Emily Browning, the anticipation for the resulting motion picture comes with months and months of anticipation. Hell, in the case of Perry’s new, star-studded drama Golden Exits, the director even gets Beastie Boy Adam Horovitz a.k.a. Ad-Rock, just to entice the hip hop heads.

However, as it arrives in theaters this week, little discussion surrounds this film, and sure that may be due to middling reviews out of a festival run last year, but as the wave of support gets louder and louder, one can only hope that this truly superlative film finds an audience. Because not only is it a very early contender for one of 2018’s best films, but it may be its beloved director’s masterpiece.

Golden Exits introduces the viewer to Nick (Horovitz), a middle-aged father of none living with his wife and working as an archivist now tasked with collecting the materials of his late father-in-law. In need of an assistant he hires the alluring Naomi (Browning), a 20-something Aussie looking to collect some experience abroad for a semester. Now in the Big Apple with only a distant family friend in the form of Nick’s much younger music producer friend Buddy (Schwartzman), she floats in and out of these lives, in and out of their families, forever altering their collective presents by bringing up their specific pasts, and all the dreams and regrets therein.

Dismissed by many critics as a filmmaker much too influenced by the likes of Woody Allen or Ingmar Bergman, Perry has become a polarizing figure in the world of modern American independent filmmaking. Starting his career with avant garde works like the incomparable Impolex, Perry has evolved into a profoundly mature documenter modern life in a specific (yes, decidedly “unwoke”) milieu. Here, while still setting his story within a world few people can find specifically relatable, Perry steers clear of focusing too heavily on the machinations of these people and their lives, instead enveloping the viewer in their lives more abstractly. How do these people relate to one another? What have they done to each other? Taken from another person? Given them? Not given them? These are the questions Perry asks of his characters and of the viewer, turning this film into a deeply moving portrait of love, loss and most clearly regret.

Whereas a film like Listen Up Philip can come across to a viewer as shrill, and even a film like the aforementioned Impolex could very well be described by detractors as “up its own ass” if you will, Golden Exits sees a quieter, more assured and emotionally mature Perry at work. Interested as much in the words his actors are speaking as he is the gestures they are exhibiting, Perry’s film is one of intonation and glances, proving him to be an ever growing director of performances. Since his earliest work, Perry has been interested in the spoken word and all that goes with it, and here every word matters, every tone taken with each word matters, and every potential meaning to each tone taken with each word matters. It’s a captivating piece of direction.

And thankfully the performers are up to the challenge. Browning is an absolute scene stealer here, reminding the viewer that she’s as much a generational talent as any working today. There’s an ease to her performance that’s absolutely startling, and she adds a great deal of depth to a performance that in the hands of, say, a Woody Allen-type filmmaker would see her as little more than the catalyst for the male lead’s arc. Instead she’s ostensibly the lead here, and each moment she’s on the screen is one you’ll find hard to turn away from. Horovitz is quite good here, proving himself to be a truly talented actor and one who will hopefully have a future in this type of romantic-drama role, but it’s the ladies that really rule this picture. Besides Browning, Chloe Sevigny and Mary-Louise Parker co-star, both of whom are absolutely above reproach. Sevigny’s self-doubting spouse to Horowitz’s Nick is a captivating dynamic, a relationship we’ve seen before throughout narrative fiction, but one that’s given life by their chemistry and the lived in quality of the performances. Parker is in full heat-check mode, chewing up each and every scene she’s in particularly one set at a dinner table opposite Browning. This scene is one of the film’s real highlights, a moment that allows not only Louise-Parker to flex her acting chops but also one that highlights the physicality of Browning’s performance, at least facially. Her face is so captivating and emotive that she seems like an actress out of time. It’s really a stellar moment in a stellar film.

Parker and Sevigny find much of their character’s narrative drama from the way they respond to Naomi’s arrival, itself hinting at the film’s core theme of loss and regret. Playing sisters, Sevigny’s Alyssa has been broken by her relationship with Nick, and while it appears to the world that they are finally back to being “normal-ish,” the sudden arrival of a younger, beautiful woman working within an arm’s reach of her husband has sent her diving head first into past hurt. And then Parker’s Gwen seems so sure of her own life choices that the same arrival of the same beautiful Aussie export takes her character to some truly surprising places. It’s a film of moments, both past and present, and how they become interchangeable in the face of pain and resentment.

It helps too that each of these moments are caught on film by one of today’s great photographers. Sean Price Williams shoots the film, and he and Perry have a long history of crafting gorgeous images together, this being maybe their crowning collaboration. Be it the film’s most striking image, Parker descending a staircase near the film’s conclusion or numerous interior sequences ranging from a neon-lit bar to a humid and cramped office space, the world feels tactile and lived in in a way few films achieve today. Again a film of deep intimacy, the film is told without much distance from its characters, finding them in close proximity with one another and all that goes with that. Not necessarily claustrophobic, although some of the close ups here do make one uneasy, Golden Exits is an ornate picture, one that feels real yet slightly more than real in the same breath. Like this film is taking place on a plain of existence in a slightly higher register than our own. The reds seem warmer, the blues feel more isolating. It’s an immaculately crafted piece of work, including the editing and score from oft-Perry collaborators Robert Greene and Keegan DeWitt respectively.

A far cry from Perry’s earliest works, Golden Exits still feels like a crowning work from a director whose project has seemingly been leading him to this exact picture. It’s rare to see films as superficially different than Impolex and Golden Exits, yet in the same turn feel entirely of the same make and model. Every bit as focused on the use of language the physicality of his performers, as a director of actors, Perry’s evolution up to this moment feels entirely true and fitting. Sure, he’s become a more assured director of images, but even then the impressionist still comes to the fore. Simply put, Perry is one of today’s greatest auteurs and Golden Exits may very well be his masterpiece.