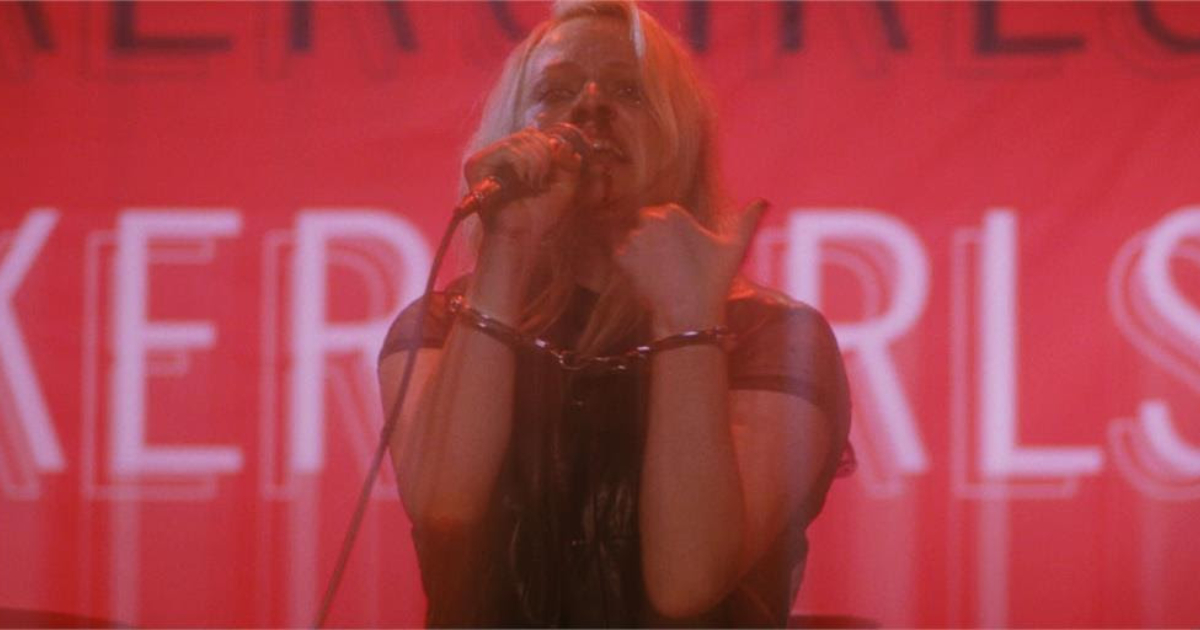 Coming off of a gig working as the screenwriter for the Disney franchise picture Christopher Robin, Alex Ross Perry’s follow-up to his then career-best film Golden Exits could not have been more highly anticipated. Teaming once again with star Elisabeth Moss and tacking onto it the incredible and almost grotesque title Her Smell, expectations were high.

And apparently, they weren’t high enough.

Her Smell finds Moss at her most abrasive, an entrancing change of pace for the beloved actress, who has never really encountered a role like the aging punk icon Becky Something. The frontwoman and guitarist for the band Something She, Something has gone from packed arenas to opening bar gigs, as the divorced mother of one faces aging, addiction and loss head-on. Told over five scenes, this roughly two-hour odyssey into a very specific type of hell is a thrilling and defiantly challenging character study that plays as something similar to a punk rock lamentation.

Speaking of the structure, this is the first aspect of the film that truly comes to mind when discussing it. Rigorously told over the span of five vignettes roughly a year apart (or though it seems, years are never denoted or made all that clear), the film gradually introduces us to various aspects of Becky Something’s life as it goes on its downward spiral. Opening on a backstage-set sequence following a performance, we see as Becky arrives late, tears down the stage with a performance, and ultimately into her fellow bandmates and everyone that comes into her path. The title of the film comes from a club that the film ostensibly opens and closes inside of, and those who pass through the doors are subject to the wrath of a woman sent into crisis. She bullies bandmates Marielle and Ali (Agyness Deyn and Gayle Rankin respectively), her label executive (Eric Stoltz) and even her seemingly estranged/ex-husband Danny (Dan Stevens, at his most muted and brilliantly mannered, a reformed punk who has gone down a path seemingly made for Something had she been in an alternate universe), all of whom love her deeply but are finding it harder and harder to keep that flame lit for her in their hearts.

One of the more exciting and entrancing segments comes with the introduction of an upstart punk group named The Akergirls, a spirited group of pixie sprites that are tapped as the next generation’s step in the punk rock legacy helped laid down by Something’s group. After falling out, more or less, with her bandmates after a recording session that’s run late (as per usual for the lead character), the threesome led by Cassie (Cara Delvigne), Dottie (Dylan Gelula) and Roxie (Ashley Benson) spark something inside of the aging rocker. The foursome interact and jam for a moment, where the film introduces us to the motherly side of Becky, a side we rarely see outside of this sequence. Is it a motherly instinct? Is it something more grotesque? Is it a want to connect out of fear of losing what little ground she has left to stand on artistically? Or does she truly see something in these three young women that sparks something deep inside her?

This texture and perceived nuance is what makes Moss’ lead performance truly transcendent. While she is at her most aggressive and seems to have completely let herself off the leash if you will, each beat is controlled perfectly by the actress, pointing out just how talented and assured of her own craft she truly is. Hers is a journey through the deepest and darkest realms of the human experience, and there’s a terrifying lived in quality to this performance that feels remarkably brave and heart-breaking. So very much is asked of her, particularly as much of the film is not just told through lengthy set pieces but set pieces that themselves are told through intense and often uncomfortable close-ups, and yet as she attempts her own redemption the tragedy only crescendos into a final line reading that leaves one in absolute tatters. There’s something about seeing Moss’ face, makeup worn and eyes wide, that is as utterly alluring as it is deeply unsettling. It’s almost as if she were a star of the silent era, giving a performance of such bombastic physicality that it makes Her Smell something entirely fresh and captivating. Even in quiet moments like a performance of “Heaven” that is the crowning achievement of the film in many ways, she’s intensely physical, only amplifying the tragedy and drama of that sequence. It’s career-defining work, really.

Thankfully, her director is also at the height of his power. While the structure of the film may feel somewhat like a gimmick, Alex Ross Perry turns these five short films into one epically told yarn about an artist in crisis. Oft-collaborator Sean Price Williams shoots this film within an inch of its life, embracing the otherworldly surreal neon of punk clubs and dark shadows that lurk around every corner within them. The fourth sequence, set at a lovely Pacific Northwest home, is a breath of fresh air for the film, and for the lead character quite literally, and allows Williams to alter the palette into muted earth tones, reflecting the lead’s attempt at getting back to Earth in her own way. The direction is lyrical and often times quite intense, finding Perry using long tracking shots to amplify the tension of the earlier sequences and, most potently in the final set piece, allow Moss’ performance and those of her co-stars time to breathe and interact with one another. The quiet moments come few and far between, but Perry’s at his best here, particularly a lovely shot involving the engineer during a recording session, watching on as Becky riffs on acoustic guitar. It’s a moment that Perry understands is a glimpse into Becky’s humanity and true artistic gift, and with these two people unknowingly caught in something deeply intimate, the film has a small emotional crescendo that pays off in spades come the very final shot. It’s a brief moment of beauty in an otherwise grotesque world, and it helps make Her Smell one of the best films of 2019.